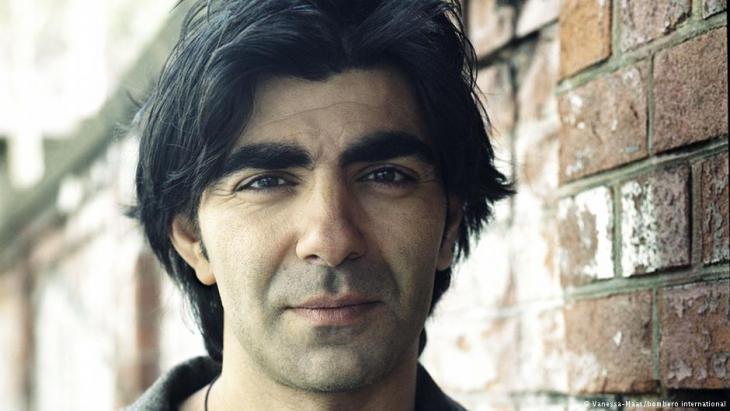 At this year's Venice International Film Festival, the German entry "The Cut" prompted discussion mainly because of its subject matter: the genocide of the Armenians. Jochen Kürten and Oliver Glasenapp spoke to the film's German-Turkish director Fatih Akin

"The Cut" had its first screenings in the competition for the Golden Lion. Following a preview for the international press, an evening gala screening attracted guests from the worlds of culture, politics and business. The women wore long evening dresses and the men tuxedos; but what they spent two hours watching on screen didn't quite fit into the glamorous setting.

"The Cut" opens up a dark chapter in Turkish–Armenian history. Against the backdrop of the Armenian genocide during World War I, in which hundreds of thousands lost their lives, Fatih Akin tells the story of a desperate Armenian father in search of his daughters. The film is not sparing with scenes of brutality or with clear pointers to the guilt of the murdering Turkish soldiers.

The audience reactions after the premiere were not all enthusiastic. Whereas most of the journalists were disappointed, the invited audience at the gala screening produced more mixed impressions, with some members of the audience making positive noises about the film. A number of viewers were clearly shaken by what they'd seen.

"Positive," says Akin. For the most part, he says, he got very enthusiastic feedback from Turkish columnists. Akin points out an important distinction: "The columnists are very influential in Turkey. They're not as interested in cinematography; they're not classic film critics, they're political columnists of all political stripes." Talking to the director, one thing becomes clear: the reception from critics, the issue of the film's aesthetic value, is one thing. The other – and this seems more important to him at the moment – is the film's subject matter.

To this day, the Armenian genocide is still a taboo subject in Turkey, making Akin's optimism all the more surprising. He seems to be in no doubt that his film will also be screened in Turkey soon. "The tenor (of the columnists' articles – ed.) is the same: this film can be shown in Turkey without hesitation, it ought to be shown in Turkey," says Akin, describing the reactions from Turkish journalists. And he's very pleased: "That's my greatest dream, for this film to be shown on general release in Turkish cinemas."

He had two main aims when making "The Cut": "It was important to me that Turkish viewers watching the film can identify fully with the main character, who's an Armenian." That was his primary and most important aim, he says. "The second goal was that Armenians watching the film also identify with the Armenian hero and accept the film, of course." This is particularly important to him because he, the director, is of Turkish origin. Fatih Akin's parents emigrated to Germany in the mid-1960s. He was born in Hamburg in 1973. 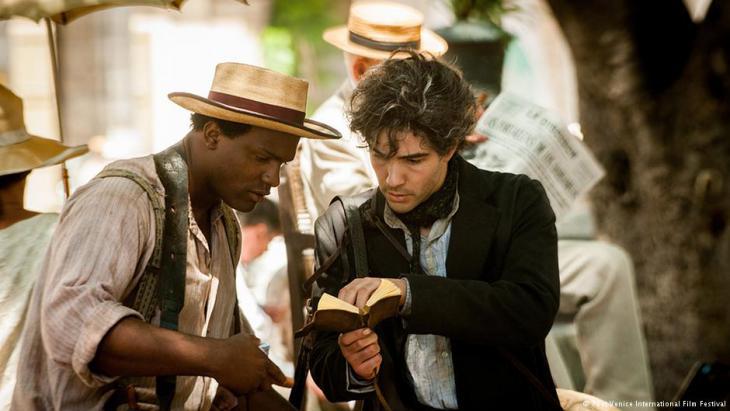 Not afraid of to grapple with thorny, controversial issues: Fatih Akin's latest film, "The Cut" tells a story from the Armenian genocide. The picture above is a still from the film. It is the director's greatest wish that the film be shown in the country of his parents' birth, Turkey

A traumatic episode in Armenian history

"The film tries to process a trauma," says Akin, taking on a philosophical note. "What do we do as individuals when we're traumatised? We go to a psychiatrist, lie down on the couch and analyse and reflect on our trauma." If you're lucky, he says, you can free yourself from trauma this way and deal with it better. Akin understands his film as an invitation to a large audience to process the trauma of the Armenian genocide. "The same thing applies to an individual as to a collective."

Akin felt encouraged by Armenians in the audience. After the gala premiere, a number of them said it was important that the subject has been tackled at last. And the film's Armenian actor Simon Abkarian said at the press conference: "This is the film we Armenians have been waiting for."

How does Akin deal with critics' objections that the film has dramatic weaknesses and couldn't decide whether it was an historical-political drama or a genre movie? He doesn't think people should categorise his work as a straightforward political film about the Armenian genocide. "I don't actually know what genocide is," says Akin. "What's the correct genre for it? What are the means? Can a film ever do justice to it?" If you only want to find out about the genocide, he says, you're probably better off making a documentary.

He has told a story that begins during the genocide, but which is also "a tragedy, an adventure, a Western, a drama, an epic". That was what he was striving for from the very outset: "I had to tell a story, an everyday story, a simple story." He made a deliberate decision to stick to a single individual's fate, "as cinematographically and conventionally as possible". This popular approach will help "The Cut" at the box office – in Germany, at least.

But will that be the case in Turkey as well? Is he afraid of threats from nationalist circles? Akin previously received threats when he was planning a film about the murdered Armenian journalist Hrant Dink. In the end, he had to abandon the project. But he doesn't let that bother him when it comes to "The Cut" and possible box-office release in his parents' country of birth.

"Why should I be afraid?" he asks. "That's what I want most of all." Perhaps, however, he's not quite as sure as he seems. After all, he admits that Turkish cinema owners who might one day show "The Cut" would be putting themselves in a difficult situation.

Home
Print
Newsletter
More on this topic
Multiculturalism in German cinema: We are here and that is how it should be!Armenians in Turkey: A feeling of powerlessnessTurkey and Armenia: "This is none of Europe's business"
Related Topics
Armenians, Cinema, Fatih Akin
All Topics

The balance of power on Europe's eastern borders is shifting. Georgian historian Beka Kobakhidze speaks from Tbilisi about rivalry and emerging alliances in the region, an ... END_OF_DOCUMENT_TOKEN_TO_BE_REPLACED

After more than a month of war, there is a new ceasefire between Armenia and Azerbaijan. But whether it will last remains questionable. The conflict in Nagorno-Karabakh sees ... END_OF_DOCUMENT_TOKEN_TO_BE_REPLACED

Sensitive to the threat of wider confrontation, Russia and Turkey are for now limiting involvement in the Nagorno-Karabakh conflict to providing humanitarian assistance and some ... END_OF_DOCUMENT_TOKEN_TO_BE_REPLACED

Azerbaijan and Armenia have been at war again over the Nagorno-Karabakh region in the South Caucasus for over a month. Three ceasefires have failed. The conflict is taking its ... END_OF_DOCUMENT_TOKEN_TO_BE_REPLACED

Fraught with disagreement, relations between the EU and Turkey under Erdogan have rarely been easy. Bearing in mind recent developments, the Union needs to present a clear and ... END_OF_DOCUMENT_TOKEN_TO_BE_REPLACED

The Armenian diaspora in France – the largest in Western Europe – is urging the country to do more to support Yerevan in the Nagorno-Karabakh conflict. But Paris is, so far, ... END_OF_DOCUMENT_TOKEN_TO_BE_REPLACED

Comments for this article: Processing a collective trauma

Fatih Akın’s film “The Cut” flunked at the Venice Film Festival: no awards. Perhaps the reason was that it was too propagandist, reminding people of Joseph Goebbel's "Nazis Uber Alles" movies. Akin should not feel bad as genocide movies are almost always guaranteed failures. Proof? How about the white elephant of a movie, "Ararat", made by Atom Egoyan? Egoyan saw the mountain, but the audience, the rat. It was a miserable flop at the box office. And then who can forget that other wretched failure of a move, “The Lark Farm”, directed by ill-informed and misled directors Taviani brothers? People are fed up with Armenian obsession. Armenians do't get it. They are getting ready to heap more of the same on us on 2015. Yawn.

It is saddening to see the use of art (films, music, literature, and more) in the service of crude propaganda. Armenian genocide is a long-discredited political claim that cannot be substantiated by historical evidence. While pain and suffering was real, it was neither confined to the Armenians, nor the Armenians were innocent bystanders. Armenians took up arms against their own government and terrorized their Muslim, mostly Turkish, neighbors and fellow citizens. Turks only defended their home in the face of a serious threat posed by Armenian insurgency to their war effort.

My father's entire family was killed by the Armenian gangs and I do not find even the most minute grain of my pain in any Armenian narrative or in the "Cut." I guess Turkish suffering still does not count in some racist minds--even in some of those of Turkish origin. The story is told by an Armenian, doped with a heavy dose of "selective morality" bordering on being racist.

If Fatih Akin wants adventure scripts, he can look at Kuscubasi Esref of WWI, who is the real life Turkish version of Indiana Jones, and others like him. His ignorance need not be his or our bliss. Before Akin reached all the way over to the other end of the world to work with an Armenian script writer in New York or LA, he should have talked to his people first. The silent cries of Turkish martyrs of WWI apparently fell on the deaf ears of this film director.

Cheap shots like "The Cut" just don't cut it anymore!

END_OF_DOCUMENT_TOKEN_TO_BE_REPLACED
Social media
and networks
Subscribe to our
newsletter