A Life Dedicated to Politics

Fatima Ahmed Ibrahim was the first female parliamentarian in Sudan. She dedicated her life to fighting for the rights of women, social justices and freedom of speech. Ibrahim was now honoured with the Ibn Rushd Award for Free Thinking. Jutta Schwengsbier reports 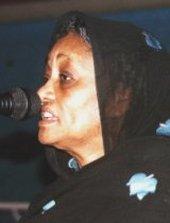 Fatima Ahmed Ibrahim spent many stints in prison because of her political activities. Thanks primarily to the massive worldwide protests she was eventually freed

​​Actually, Fatime Ahmed Ibrahim is not what you might call a natural born politician. A communist, she prides herself in always openly saying what she thinks, disregarding the consequences. As a young woman, she was regarded as beautiful, from an upstanding, well-to-do family. She was one of the first women in Sudan who was allowed to apply to study at an institute of higher education.

However, instead of a life of luxury she decided very early on that she wanted to dedicate her life to politics. She founded a powerful woman's organisation as a collective movement for like-minded individuals of all parties, religions and ethnic groups.

"Equality with men was unheard of"

"When we demanded political rights in 1954 the Islamic Front maintained that we were against Islam," Fatima Ahmed Ibrahim says. "Women were not allowed to have any political rights and equality with men was unheard of. That's why two Muslim sisters stepped down from the executive council of our women's union."

In Sudan, Islam plays an important role in everyday life. However, many can't even the read the Koran. That's why as a daughter of an Imam, Fatima Achmed Ibrahim began to interpret the holy script herself. The dedicated communist attacked the Islamic fundamentalists with their own weapon, with the verses of the Koran, read from a female face.

"When we won the right to vote for women I became a candidate," Fatima Ahmed Ibrahim explains. "The Islamic Front nominated the Muslim sisters who left our women's organisation because we demanded political rights. In 1954 she said that was against Islam, in 1964 she became a candidate for parliament. We asked, had God changed his mind again? Did he send you another prophet who said I was against it but now it is possible? That means, they misinterpreted Islam for their own benefit. We both were candidates, but I won and became a member of parliament."

Many of the laws introduced by Fatima Achmed Ibrahim as a parliamentarian have been adopted as part of the constitution. She had been actively fighting against forced marriage of underage girls and polygamy.

"In parliament, we demanded complete equality for working women," the activist says. "In 1969 women received the same rights when it came to earnings, pension and working conditions. In addition, we also demanded that women be appointed judges of the Islamic faith. And we achieved that! Sudan was the only Islamic country that had female judges for Islamic law. Women became diplomats, joined the army, became policemen."

Because of that the UN awarded Ibrahim's organization the Human Rights Award in 1993. Hers was the first women's organisation worldwide to receive that award.

But Fatima Achmed Ibrahim wasn't just the recipient of honours and awards. Following a coup d'etat all parties and political institutions were broken up and disbanded. Once again, because of her political convictions and activities, Fatima landed in prison. Today, she suffers from acute depression and often breaks down into tears when she thumbs through old photos.

High price for the struggle

"That is my husband El Shafia Achmed El Sheik," she says pointing at a photograph. "He was secretary-general of all trade union federations and vice president of the International Association of Labour Unions. He was tortured to death and then strung up only because he refused to become a minister in Numeiri's military government. He was executed in 1971. At that very same minute, they arrested me and locked me up for two-and-a-half years.

But even after her release she has remained politically active. She escaped a life behind bars, thanks primarily to the massive worldwide protests that demanded her freedom. She went into exile in 1990. After living in London for 16 years, Fatima has now returned to Sudan where she has resided for the past year. At the age of 80+ some of her recollections are a bit clouded, however, she can still give a blazing speech that leaves the opposition stunned.

Portrait Awatif Elageed
Committed to the Koran and to Tolerance
Awatif Elageed is a Muslim woman from the Sudan who actively supports the causes of women's rights and dialogue between religions in her native country – and she holds a teaching post at the Ahfad University for Women. By Monika Hoegen

Muslim Women in Northern Nigeria
The Example of Nana Asma'u
In Northern Nigeria, women often base their claims to education and employment on Islamic principles. For many, the practice of segregating the sexes is no insurmountable obstacle. Katja Werthmann takes a closer look.

Interview with Eren Keskin
"The Turkish Military Has Too Much Power"
The Kurdish-born attorney Eren Keskin has been awarded the "Theodor Haecker Prize for Civic Courage and Political Integrity." In an interview with Petra Tabeling, she speaks about human rights and the Turkish military

Comments for this article: A Life Dedicated to Politics

Your article is dated 2006 ,more than 10 years ago! She passed away on 12 August in London and deserves an obituary.