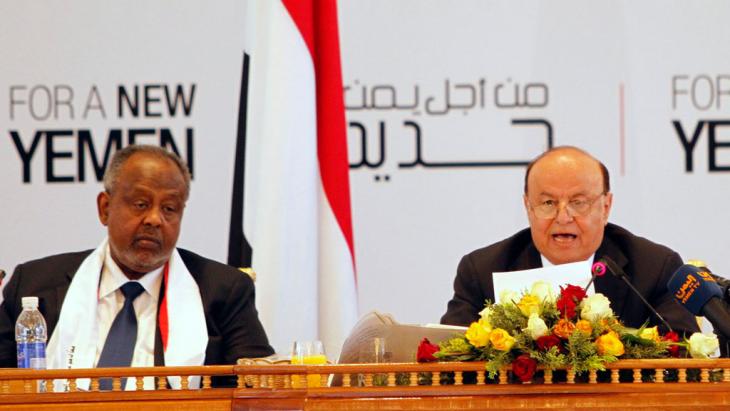 Federalism and state-building in Yemen
Between transition and stagnation

With the conclusion of the National Dialogue Conference and the decision to introduce a federal system, Yemen would appear to be moving forward in its transition process, paving the way for a new constitution and democratic elections. However, things in the country are not as rosy as they might seem at first glance. By Marie-Christine Heinze

In year three since the "revolution" against former President Ali Abdullah Saleh in 2011, the news reaching us from Yemen seems like a contradiction in terms. On the one hand, Yemen's institutionalised transition process is being held up as a model for other Arab Spring countries. On the other, the talk is of "civil war-like conditions" caused by a broad military campaign currently being waged against al-Qaida in many parts of the country and the closing down of embassies for fear of reprisal attacks.

The fact of the matter is that the transition process, the individual steps of which were laid down in the executive mechanism of the Gulf Cooperation Council Initiative (GCC Initiative), contains several inherent problems that have resulted in many negative and only few positive consequences.

At first glance, things don't look that bad at all: after the then President Ali Abdullah Saleh signed the GCC Initiative in November 2011, a consensus government consisting of the former governing party (GPC) and the coalition of former opposition parties (JMP) was formed and tasked with carrying out the work of government until the elections that would mark the end of the transition process.

On course for a federal system

In February 2012, former Vice President Abd Rabbu Mansour Hadi was elected as Saleh's successor in a single-candidate election. The Restructuring Committees of the Ministry of the Interior and the Ministry of Defence began the work of reforming the security sector. After some delay, the National Dialogue Conference (NDC) began its work in March 2013. The NDC came to a conclusion in January 2014, having made more than 1,800 recommendations, including one to introduce a federal system.

A few days later, President Hadi established a committee to decide what the members of the NDC had not been able to do, namely to divide Yemen into six new federal regions. A national authority established in April will now oversee the implementation of the NDC's recommendations. 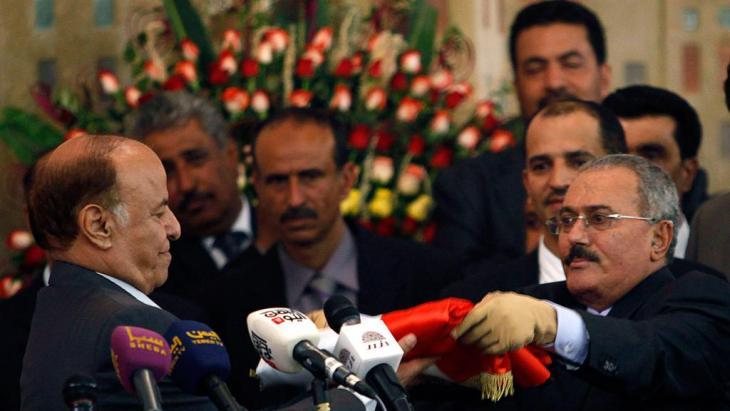 The National Dialogue Conference was considered the centrepiece of the democratic transition process. The aim was that opposing political factions would get together with representatives of other social and political interest groups (ethnic minorities, women, young people) from all parts of the country in order to draft recommendations for a "new Yemen" with a new political system and a new social contract.

One of the key sticking points was the attempt to resolve the so called "southern issue". Back in 2007, a protest movement emerged in the south of the country. Its members voiced their dissatisfaction with the marginalisation of what had been South Yemen after unity in 1990 and civil war in 1994 at the hands of the Saleh regime, which was largely supported by northern elites. Because Saleh ignored the legitimate demands of the movement, instead either seeking to co-opt its members or using violence against them, demands to "liberate" the South from the "northern occupation" and to establish an independent "South Arabia" began to be voiced in 2009.

The aim of introducing federalism is to address the interests and grievances of formerly marginalised regions such as southern Yemen. The hope is that if these regions are given the possibility to take important matters of governance into their own hands, the elites in the centre will lose some of their power, and southern calls for secession will subside.

A precondition to functioning federalism is, however, that the federal regions recognise the systemically necessary role of the centre, and that the centre is willing to work with the political players in the federal regions even if they come from different sides of the political divide. Neither precondition is as yet fulfilled. Most people in the South recognise neither the decisions made by the National Dialogue Conference nor the recommendation to divide Yemen into six federal regions. Instead, they continue to call for secession.

The fact that the aspiration to establish an independent state in the South has consolidated over the last two years and has in some places even turned into a deeply felt hatred towards members of the northern elite is also the result of failure on the part of the consensus government and President Hadi. Too little has been done in the past two years to win the trust of the people in the South and to show that their claims and grievances are taken seriously.

This failure is rooted in several problems inherent to the transition process that afflict the country as a whole: firstly, the transition process is progressing too slowly. The committee to draft the new constitution on the basis of the NDC recommendations was only established in March 2014 and was given a full year for its work. Such a long period was not foreseen in the original roadmap. This means that a constitutional referendum will take place in 2015 at the earliest. 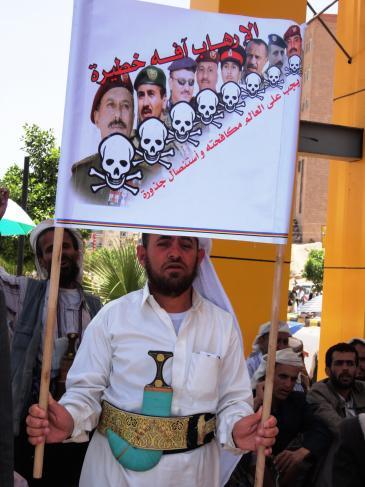 A country still not at peace: a protester in the Yemeni capital, Sanaa, demonstrates against the power of the Saleh clan

Until then, the concrete organisational principles of the new federal system will remain unclear. This also means that important political decisions and measures necessary for the stabilisation and economic development of the country will not be taken – a waiting attitude that large parts of the consensus government have adopted since its establishment in December 2011. As yet, no dates have been set for presidential and parliamentary elections and, therefore, the end of the transition process. After all, the electoral system will most probably have to be reformed after the constitutional referendum to comply with the new federal system.

A second problem is that the transition process is largely being steered by the country's old political elites, who don't yet seem to have completely come around to the idea of a "new Yemen". Here, it is taken for granted that the international community will pave the way for Yemen, as always with – among other things – financial means. On an institutional level, therefore, these elites are playing the game of the international community as this is the precondition for access to donor money, while at the same time and at another level continuing their power struggles with other means, including violence.

The international community is aware of this. Experience has taught its members to be hesitant when it comes to giving financial support to the Yemeni government. A national authority, the Executive Bureau, has been established to oversee the use of pledged money. However, it faces difficulties in its work due to a lack of ability (and political willingness) on the part of the government to invest the money in actual projects.

In addition to the establishment of the Executive Bureau, UN Security Council resolution 2140 was unanimously adopted at the end of February 2014. In accordance with this resolution, sanctions can be imposed on players who fuel unrest in Yemen and seek to derail the transition process. This resolution is not only directed against former President Saleh, who continues to preside over the former ruling party GPC, which is part of the consensus government, but also against other members of the political elite.

Another not insignificant part of the problem is the international community itself. On the one hand, Saudi Arabia, Qatar and Iran continue to pursue their own national interests in Yemen, which has long been a battleground in these countries' struggle for regional supremacy. On the other, the West mainly looks at Yemen through stability- and security-tinted glasses.

This particularly pertains to the influential role of the United States, whose main interest continues to be the battle against al-Qaida. From the US perspective, Yemen has to be stabilised and al-Qaida has to be combated – and this is where all US visions for Yemen end. A US drone programme carried out with the consent of the Yemeni President, which essentially sentences people to death without due process and accepts the loss of civilian lives as "collateral damage", contributes neither to the establishment of the rule of law in the country nor to the legitimisation of the government in the eyes of the people. 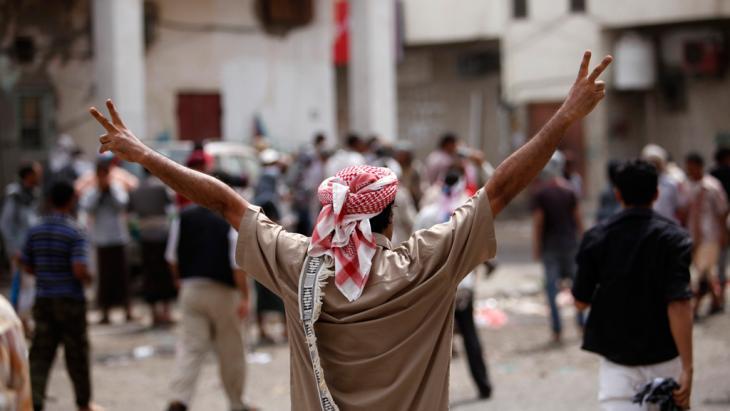 Supporters of the separatist "Southern Movement": according to Marie-Christine Heinze, "because Saleh ignored the legitimate demands of the movement, instead either seeking to co-opt its members or using violence against them, demands to 'liberate' the South from the 'northern occupation' and to establish an independent 'South Arabia' began to be voiced in 2009"

The almost exclusive focus on a "stabilisation" of Yemen has led to a focus on the old political elites and the transition process as laid out in the GCC Initiative, neglecting the country's numerous other problems and potential.

Two of the most pertinent among the former are the widespread food insecurity experienced by two thirds of the population and the fact that the country is quite literally drying up. Foremost among the latter is the economic potential of the country's youth, who carried the 2011 "revolution" in the hope of a brighter future.

In urban areas in particular, there is a generation of young women and men making use of new spaces currently opening up as a result of the elite's focus on its own infighting. New forms of cultural expression are emerging alongside new business ventures whose ideals are, above all, carried by the creativity of a generation at home in the new technologies.

The development and national liberalisation of the telecommunications sector could strengthen this potential and simultaneously ensure greater freedom of expression. But this requires that people beyond the institutionalised transition process and stabilisation measures are acknowledged.

Neither a new constitution nor a broad military campaign against al-Qaida will stabilise Yemen; education and economic development will.

Marie-Christine Heinze
© Qantara.de 2014
Editor: Aingeal Flanagan/Qantara.de
Marie-Christine Heinze works at the Department of Near and Middle Eastern Studies and Languages of the University of Bonn. She is head of a project on the "revolution" and transition process in Yemen funded by the Volkswagen Foundation and co-implemented by the University of Bonn and the Yemen Polling Center in Sanaa.

Thanks to climate change, the Middle East is heating up faster than any other part of the world, putting the region's ancient pyramids, castles, holy and other heritage sites at ... END_OF_DOCUMENT_TOKEN_TO_BE_REPLACED

After a two-year hiatus, the Arab League re-convened at the beginning of November in Algiers against a backdrop of uncertainty and discord. By Pierre Boussel END_OF_DOCUMENT_TOKEN_TO_BE_REPLACED

Germany needs a strategy when brokering deals with countries like Qatar, Saudi Arabia or the United Arab Emirates that allows it to maintain its own moral compass. By Sebastian ... END_OF_DOCUMENT_TOKEN_TO_BE_REPLACED 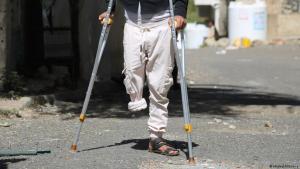 The war in Yemen is not over, but at least there is a ceasefire. Meanwhile, the population is suffering from landmines that have made large parts of the country impenetrable. ... END_OF_DOCUMENT_TOKEN_TO_BE_REPLACED

END_OF_DOCUMENT_TOKEN_TO_BE_REPLACED
Social media
and networks
Subscribe to our
newsletter