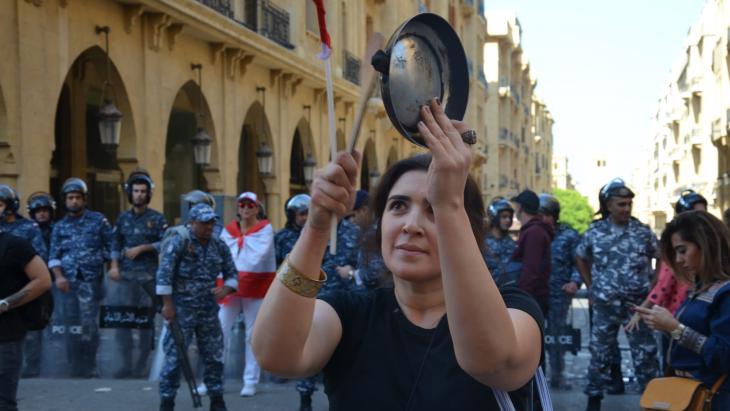 Female protesters in Lebanon
Solidarity is the solution!

Women have been the driving force behind the popular protests in Lebanon for months. They are fighting for the rights of everyone – women, minorities, refugees or migrants. Julia Neumann reports from Beirut

"Nothing will be able to stop our determination and our commitment," is the message posted by feminists in Lebanon on Facebook, thereby officially cancelling the annual demonstration rally to mark International Women’s Day in Lebanon. A ministerial committee had previously ordered that all cultural events be cancelled due to the coronavirus.

This does not mean that women in Lebanon have fallen silent on the subject of their rights. Quite the opposite: to this day, they continue to take to the streets and demand that they are heard. Lebanese women have been protesting since 17 October 2019 against the corrupt political system that has brought the nation to the brink of national insolvency.

And the protests had an impact: Prime Minister Saad Hariri stepped down in late October. In the meantime, a new government has emerged with close links to the old guard. Protester numbers have been low, but feminist groups continue to be active in the fight for the rights of all people in Lebanon – whether LGBTQI+, refugees or migrants.

Fighting for the rights of the invisible

"Many people on the streets with megaphones have a feminist background," says Roula Seghaier, a feminist activist from Beirut. "We mobilise every year on International Women’s Day at the very least, but for a while now many of us have been involved in organising protests. We organise marches to demand our rights and the rights of so many invisible communities in Lebanon."

In road blockades and strikes by lawyers, doctors and students – large numbers of women were involved in the mass protests from the outset. It’s not the first time that they’ve led protests in Lebanon. But never before have women been active on the streets to such an extent. For weeks, they picked up litter the morning after the demonstrations, sprayed graffiti on the walls and banged spoons on pots to ensure their demands were heard. Even five months after the start of the uprisings, they are still organising public discussions, protest marches and solidarity events. 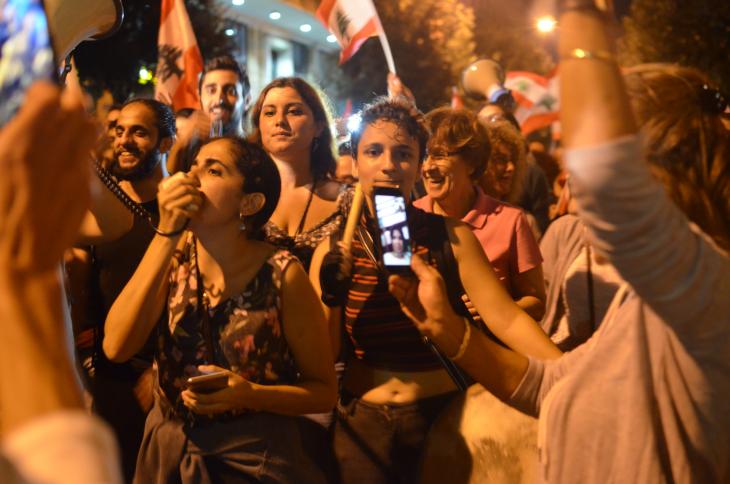 "We are trying to bring the voices of those not normally heard – voices that have been silenced or not prioritised – onto the streets,” says activist Roula Seghaier. Anyone calling for the unity of all Lebanese under one flag must include all social groups, she says. "Every cause is priority, and solidarity is the solution"

"Many lawyers have offered to help women who were harassed or abused during the revolution," says Pamela Moussallem. "This is a great initiative. But women endure these struggles every day. They are abused, they are violated, and they are harassed on a daily basis. But legal support is expensive and therefore inaccessible for many."

A karate kick with consequences

The courage of these women was then honoured with a protest march against sexual harassment and in favour of self-determination. Another tough woman became the heroic symbol of these rallies: when the education minister was surrounded by protesters, his bodyguard fired his gun into the air. Whereupon Malak Alaywe Herz dealt the bodyguard a swift karate kick in the groin. A video of the scene and illustrations of the kick went viral. Alaywe Herz had to answer for her actions in a military court.

From the very beginning, mainly feminist activists turned the protests into an intersectional battle, linking demands for the dismantling of the corrupt system with the fight for equal rights for women, LGBTQI+ and migrants. For example, one of their key demands is that women should be able to pass on their nationality to their children – this is not possible under Lebanese law. This means that children with Syrian or Palestinian fathers in particular suffer discrimination on the labour market and are not entitled to any health insurance.

On banners and through microphones they voice messages against racism and demand justice for female migrant workers. Lebanon still uses what’s known as the kafala system, which allows employers of foreign household staff to confiscate their passport and exploit them.

Lending a voice to the unheard

"We are trying to bring the voices of those not normally heard – voices that have been silenced or not prioritised – onto the streets,” says activist Roula Seghaier. Anyone calling for the unity of all Lebanese under one flag must include all social groups, she says. "Every cause is priority, and solidarity is the solution."

The history of the women's rights movement in Lebanon is long. In 1943, they took to the streets to demand independence from France. In 1953 they won the right to vote and in 1994, after the end of the 30-year civil war, they battled for the right to travel abroad without having to request the permission of their husbands.

With their protests, the women in Lebanon have forged a link with these predecessor activists. Especially today, their fight for emancipation and equal political rights is more necessary than ever. Not least because the economic situation in the country has recently deteriorated dramatically.

Women are therefore also especially hard hit by the nation’s economic crisis, says 28-year-old activist Alexandra Warde: "There are many issues we need to tackle. We earn less than men, but more women are jobless. We’re not taken seriously in many jobs and we’re not represented in many professions and politics. But even if it takes a hundred years, we will make sure people are aware of the situation and we will not be silenced."

How are comic book artists in the Arab world responding to the political situation in the region? Lena Bopp talks to illustrators Lina Ghaibeh and George Khoudry about young ... END_OF_DOCUMENT_TOKEN_TO_BE_REPLACED

The clashes in Baghdad between supporters of Muqtada al-Sadr and pro-Iranian militias show that an intra-Shia power struggle is in full swing. An analysis from Cairo by Karim El- ... END_OF_DOCUMENT_TOKEN_TO_BE_REPLACED

In this essay, renowned Lebanese journalist and writer Hazem Saghieh asks whether the Arab Levant, which stretches from Iraq in the east to Egypt in the west, will remain an ... END_OF_DOCUMENT_TOKEN_TO_BE_REPLACED

Since Ali Khamenei, Iran's most powerful man, has openly and unconditionally come out in support of Putin's war in Ukraine, logistical help is on its way, with an allegedly ... END_OF_DOCUMENT_TOKEN_TO_BE_REPLACED
Author:
Julia Neumann
Date:
Mail:
Send via mail

END_OF_DOCUMENT_TOKEN_TO_BE_REPLACED
Social media
and networks
Subscribe to our
newsletter