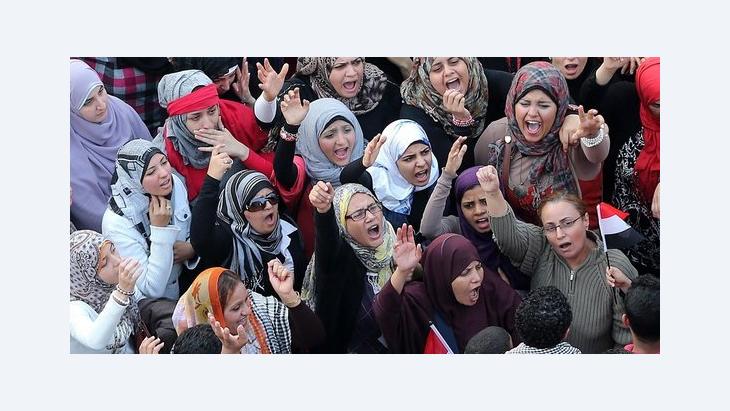 Female Rights and the Arab Spring
A Backward Leap for Women

﻿Now, as the dust of the Arab Spring revolutions begins to settle, women – who stood shoulder to shoulder with men in defying tyranny – are finding themselves marginalized and excluded from decision-making. By Hoda Badran

﻿In Tunisia, a mass protest called for all women to be veiled, which led to unveiled female religion professors being hounded off campuses. Mobs shouted at Tunisian women demonstrators to go back to the kitchen "where they belong". In Egypt, too, conservative forces are on the rise, demanding policies – particularly reforms of family legislation – that would represent a step backward for women.

Angered and alarmed by these developments, Arab women have been forced to defend their rights. In April 2011, Tunisian women successfully pressed for an electoral-parity law, thanks to which they won 49 of 217 parliamentary seats in last October's elections. In Egypt, though, the prospects for women seem gloomier, because they failed to retain the pre-revolution quota system that had given them 64 parliamentary seats. 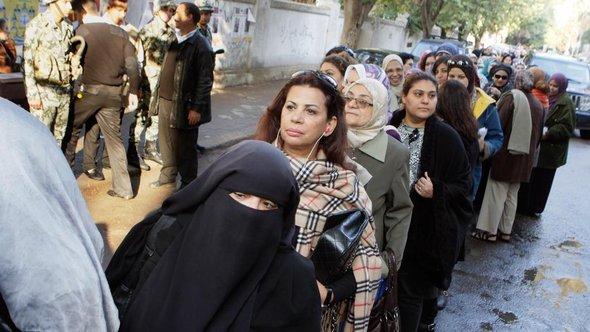 In Egypt the prospects for women are gloomy, because they failed to retain the pre-revolution quota system that had given them 64 parliamentary seats. Pictured: Egyptian women line up out side a polling center in Cairo, on 28 November 2011 during Egypt's first parliamentary elections since Hosni Mubarak was ousted by a popular uprising

​​That system was replaced by a new electoral law that obliges political parties to include at least one woman on their candidate lists. But almost all of the parties put female candidates at the end of their lists; as a result, only nine women were elected to the parliament. The Supreme Council of the Armed Forces (SCAF), the ruling junta, appointed two more women, bringing the share of women MPs to about 2 per cent.

Islamist groups won majorities in both the Tunisian and Egyptian parliaments. Draft legislation that reflects a restrictive interpretation of sharia (Islamic law), particularly concerning women's status, is now being submitted for debate in Tunisia. And there seems to be a clear intention in many Arab countries to allow unrestricted polygamy, for example, even where it was prohibited prior to the Arab Spring.

In Egypt, matters are more complicated. SCAF, fearing an Islamist takeover ahead of the presidential election, dissolved the parliament in June, following a judicial decision that they (and the court) insist must be upheld. But the new president, the Muslim Brotherhood's Mohamed Morsi, has ordered the parliament to reconvene.

Previously, the parliament's legislative committee received a proposal to lower the age of marriage for girls from 18 years to 12. Needless to say, this would cut short girls' education, not to mention other harmful implications.

A powerful feature of the Egyptian revolution was the equality between the very different actors who initiated it. None tried to seize a leadership role. The power struggle pitted the forces of Hosni Mubarak's regime against the people, including women, who were on the streets and in the squares demanding freedom, dignity, and social justice.

But now things are strikingly different. The once unified opposition to the Mubarak regime has become fragmented, with each faction defending its own interests and advocating its own version of the revolution's goals. The two most prominent actors in the new power spectrum – the military, represented by SCAF, and the Islamists, who include the Muslim Brotherhood and the Salafists – are surrounded by lesser political parties, youth coalitions, and others.

Unfortunately, women's political position is weak. The National Council for Women has been restructured, there is a new Egyptian Feminist Union, and a number of coalitions made up of feminist NGOs have been created. But they are far from being sufficiently organized to work together effectively. 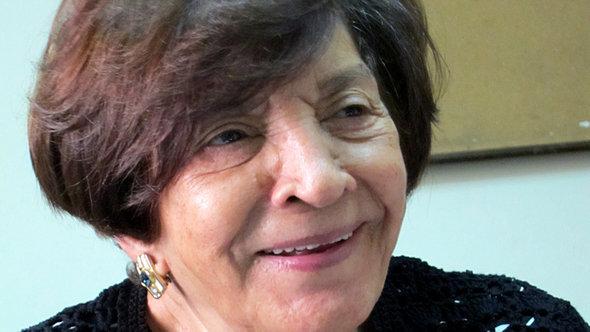 Despite the new freedoms championed by the revolutionaries, women continue to be regarded as subordinate to men, says Hoda Badran, President of the Egyptian Feminist Union and Egypt's most prominent women's rights activist

​​There now seem to be two scenarios for women's future status in Egypt, neither of which is very hopeful. In the first scenario, SCAF regains power and gets to rule the country under the military system introduced in 1952 when Mohamed Naguib and then Gamel Abdel Nasser seized power.

Militarism and patriarchy are inextricably linked, and both view masculinity as the opposite of femininity. If soldiers – and, by extension, all "real" men – are strong and daring, then real women should be the antithesis: passive, obedient, and in need of protection as "good" wives, sisters, and mothers.

A theocracy in Egypt?

The second scenario is an Islamist regime: Morsi negotiates with SCAF a transition to civilian rule; Islamists continue to dominate a restored parliament; and the new constitution establishes a theocratic state. Most of Egypt's Islamists, particularly those who returned from exile in Saudi Arabia, adhere to the Wahhabi sect, with its severe restrictions on women, implying that women's status would be much worse than it was before the revolution.

Among other things, new legislation would make polygamy the rule, rather than the exception, and would deprive women of an equal right to divorce. The Islamists could also impose the veil and later on the niqab. An immense effort would be required of women's-rights activists to be prevent a reign of injustice.

Unfortunately, neither SCAF nor Morsi espouses the type of liberal regime that would provide women with opportunities to take on the leadership roles that have traditionally been denied to them. Indeed, the only glimmer of hope remaining for women's equality and dignity in Egypt is the willingness of all who seek such a regime to unite and try yet again to fulfil the democratic promise of Egypt's revolution.

People in Arab countries have been talking more openly about sex and sexuality for some time now, especially on social media. And for the first time ever, they have the vocabulary ... END_OF_DOCUMENT_TOKEN_TO_BE_REPLACED

Alaa Abd el-Fattah, arguably Egypt’s most prominent democracy activist, has just been handed another lengthy prison sentence. Despite this, a book of his writing has recently been ... END_OF_DOCUMENT_TOKEN_TO_BE_REPLACED

A prominent rights group in Egypt, the Arabic Network for Human Rights, is ending operations just as the country braces for a controversial NGO law. Is this the beginning of the ... END_OF_DOCUMENT_TOKEN_TO_BE_REPLACED

Moncef Marzouki was Tunisia's first democratically elected president after the fall of dictator Ben Ali. Today he is the most prominent critic of increasingly counter- ... END_OF_DOCUMENT_TOKEN_TO_BE_REPLACED

Asef Bayat, professor of Sociology at the University of Illinois, Urbana-Champaign, has been studying revolutions and how they affect people since 1979. In his recent book, " ... END_OF_DOCUMENT_TOKEN_TO_BE_REPLACED

Every year in December, the team at Qantara.de takes a look back at the articles that proved most popular with our readers. This year is no different. Here is a run-down of the ... END_OF_DOCUMENT_TOKEN_TO_BE_REPLACED
Author:
Hoda Badran
Date:
Mail:
Send via mail

END_OF_DOCUMENT_TOKEN_TO_BE_REPLACED
Social media
and networks
Subscribe to our
newsletter