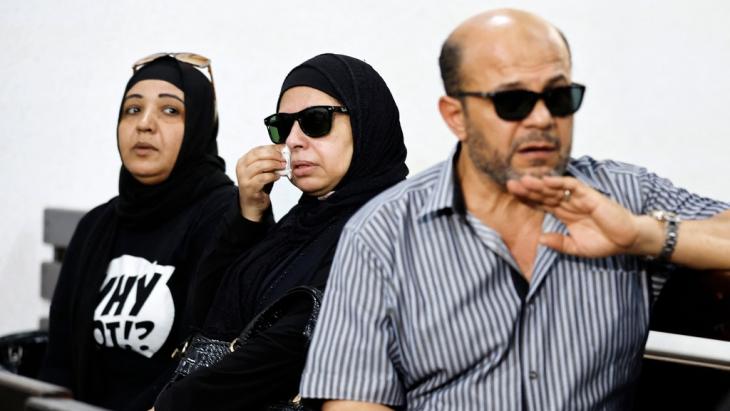 Femicide in Egypt
"If you say no, you'll be in trouble"

The murder of a female student at Mansoura University in the Nile Delta has sparked a long overdue debate on femicide in Egypt. Karim El-Gawhary reports from Cairo

It happened in broad daylight outside the gates of Mansoura University. A young man approached the student Naira Ashraf, stabbed her with a knife and ended up slitting her throat. Shocked bystanders intervened and were able to detain the man until the police arrived. Naira died on the way to hospital.

In many cases of femicide, the murderer is from the victim's family or a close acquaintance. It is difficult to obtain exact figures on how many women in Egypt are murdered by people they know. A report on violence against women published last February by the "Edraak Foundation for Development and Equality" lists 214 cases of women murdered by members of their own family in 2021, for example by a husband or former husband. Fifty-one women were killed by people outside their family, including 11 by neighbours. In Naira's case, the perpetrator and his victim came from the same village in the Nile Delta. The killer had been stalking Naira for some time after she refused to marry him. She blocked him on Facebook and filed a complaint against him. The report ended up, as so often happens in such cases, being hidden away in a drawer at the police station. The young woman remained defenceless.

Such femicides normally make the headlines in Egypt only briefly, then the country goes back to business as usual. Society often dismisses these cases as private matters. Only 24 hours after Naira's murder, two other women were reported killed. They were both stabbed to death by a brother in a family dispute. In one case, the brother resorted to the knife because he blamed his sister for two divorces.

But Naira's murder provoked a bigger response from the start, partly because it took place in public. A cell phone video of the attack and how the attacker was overpowered made the rounds on Egypt's social media, as did a photo of the 21-year-old student lying in a pool of blood on the dirty pavement in her blue jeans and yellow shirt. The reports set off a widespread public debate, especially on social media. 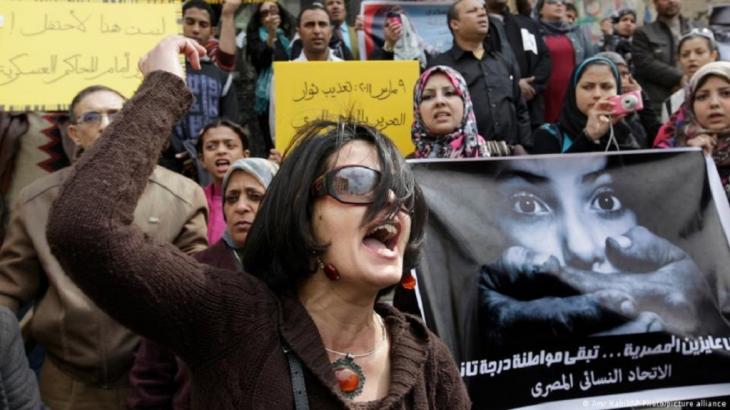 Women protest in Cairo against a culture where they are not asked for their consent: "As long as the complaints of young women are not taken seriously and these women are seen as troublemakers who instigate other girls, things like this will keep happening," says Egyptian women's rights activist Nehad Abo El Komsan in a widely shared Instagram video. The failure of the police to take action in this case is no exception, says Shaimaa al-Tantawy, head of the Egyptian women's organization "Barah Aamen", or Safe Space. Stalking is often dismissed as a private matter, she told the independent news platform Mada Masr

As long as the victim is blamed, nothing will change

"As long as the complaints of young women are not taken seriously and these women are seen as troublemakers who instigate other girls, things like this will keep happening," says Egyptian women's rights activist Nehad Abo El Komsan in a widely shared Instagram video. The failure of the police to take action in this case is no exception, says Shaimaa al-Tantawy, head of the Egyptian women's organization "Barah Aamen", or Safe Space. Stalking is often dismissed as a private matter, she told the independent news platform Mada Masr.

Women's groups have been fighting back for years against a culture in which women's consent is often deemed unnecessary. Two years ago, Egyptian singer Tamim Younis's hit song, "If you say no, you'll be in trouble", triggered a public controversy. Women's groups warned that the song was a call for violence against women. Younis responded by removing the track from his YouTube channel, but it can still be heard in clubs, on boats plying the Nile or at private parties. The song might also have motivated Naira's murderer.

So the struggle by Egyptian women's groups goes on. They charge the police with inaction when women file complaints and point to the tendency of conservative segments of society to repeatedly blame the victims instead of the perpetrators. This time, too, a prominent sheikh, a dean at the Islamic Al-Azhar University, spoke out, blaming Naira's clothing style for the crime. "If you value your life, wear an abaya when you go out in public instead of tight jeans with your hair dangling across your cheeks. Why? Because their mouths are watering and they have nothing else, and because otherwise they will slaughter you," commented Sheikh Mabrouk Attia on his Facebook account in a video accompanied by dramatic music.

This video, too, spread like wildfire though the social media. But this time the conservative apologists for violence against women had to concede a setback. Several complaints were filed against the sheikh. The National Council for Women in Egypt stated that "the sheikh's statements incited violence and murder against women, and thus made him liable to prosecution".

The sheikh in question has now publicly declared that he will take a leave of absence from the university and will no longer appear in public. Al-Azhar issued a fatwa strictly condemning any justification for murdering a woman based on her clothing. Meanwhile, the debate on femicide in Egypt rages on. The murdered 21-year-old student has become an icon. "Justice for Naira" was the most frequent hashtag on Egypt's social media for days.

But the murderer is also apparently serving as a role model. Just a few days after Naira's death in Egypt, a young female student named Iman Ershid was shot dead in neighbouring Jordan with five fatal bullets. The killer had previously warned his victim. "If you don't talk to me, I'll kill you just like that guy did in Egypt."

Tourists have been returning to Tunisia, Egypt and Morocco. But, given the global uncertainty caused by the Ukraine war, will the comeback be enough to save a struggling sector, ... END_OF_DOCUMENT_TOKEN_TO_BE_REPLACED

In this essay, renowned Lebanese journalist and writer Hazem Saghieh asks whether the Arab Levant, which stretches from Iraq in the east to Egypt in the west, will remain an ... END_OF_DOCUMENT_TOKEN_TO_BE_REPLACED

By 2050, the Middle East and North Africa could be dealing with many more elderly people suffering from dementia. A lack of facilities, specialists and local knowledge means the ... END_OF_DOCUMENT_TOKEN_TO_BE_REPLACED

With his fist bump greeting for a man he previously called a pariah, US President Biden has paved the way for Saudi Crown Prince Mohammed bin Salman's return to the international ... END_OF_DOCUMENT_TOKEN_TO_BE_REPLACED
Author:
Karim El-Gawhary
Date:
Mail:
Send via mail

END_OF_DOCUMENT_TOKEN_TO_BE_REPLACED
Social media
and networks
Subscribe to our
newsletter