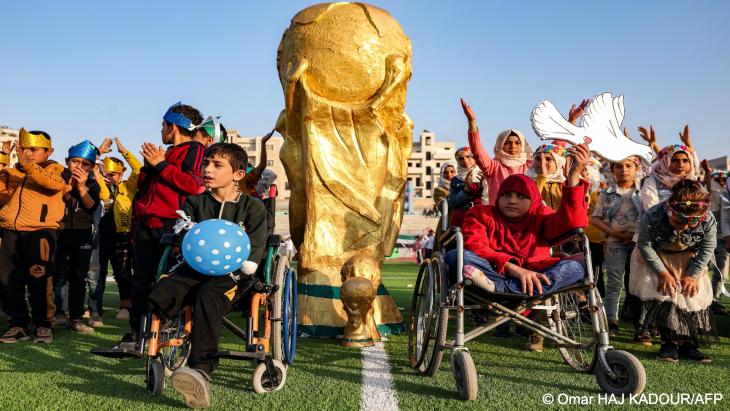 More than 300 children in rebel-held northwest Syria kicked off their own football World Cup on Saturday, with organisers hoping to shine a light on communities battered by 11 years of war

Excited children took part in the opening ceremony at the municipal stadium in Idlib, some wearing the jerseys of this year's World Cup teams, an agency photographer said.

Their 32 squads correspond to the nations that have qualified for the World Cup, which started on Sunday in Qatar. Their competition opened with a match between the host country and Ecuador, reflecting the official schedule.

"I represent Spain and I hope we win the cup," gushed 12-year-old Bassel Sheikho, who works in a garage.

While children from camps for displaced people in Idlib and surrounding areas make up 25 of the teams, the other seven are composed of children who work in industrial zones in the region.

Syria's war has killed around half a million people and displaced millions more since starting in 2011 with the brutal repression of anti-government protests. The Idlib region is home to about three million people, around half of them displaced. 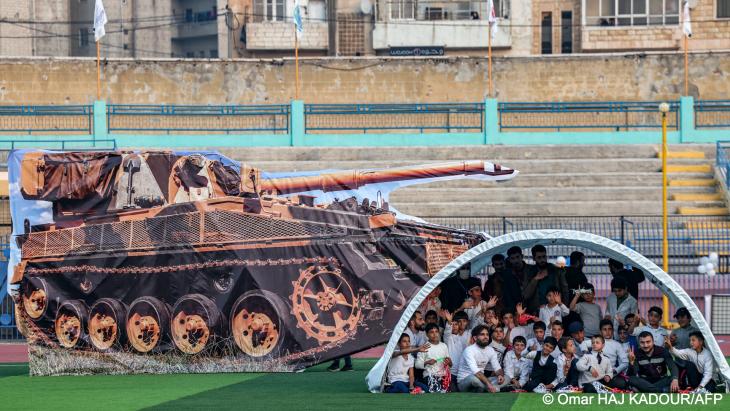 Idlib's "Camps World Cup": children aged 10 to 14 have been training for months to take part in the tournament, organised by the non-governmental organisation “Violet”. The event aims to encourage children to participate in sport and to "focus international attention on displaced youth and those who work", who are among those most exposed to sometimes deadly risks

Children aged 10 to 14 have been training for months to take part in the "Camps World Cup", said Ibrahim Sarmini from the NGO Violet, which organised the tournament. He said the event aims to encourage children to participate in sport and to "focus international attention on displaced youth and those who work", who are among those most exposed to sometimes deadly risks.

The last pocket of armed opposition to President Bashar al-Assad's regime includes large swathes of Idlib province and parts of the neighbouring Aleppo, Hama and Latakia provinces. The Hayat Tahrir al-Sham (HTS) jihadist group, led by al-Qaida's former Syria affiliate, is dominant in the area, but other rebel groups are also active.

The "Camps World Cup" matches will continue throughout the official tournament period, and the final will be organised in a camp in Idlib.

Sarmini noted that winter was set to begin in full force, with rains expected once again to bring misery to the ramshackle, poverty-stricken camps. "I hope the whole world will turn their attention to the displaced and will support them so they can return to their homes as soon as possible," he said.

Recent efforts to rehabilitate Assad are setting a damaging precedent for accountability, just as the international community is expressing the need to hold Russia to account for ... END_OF_DOCUMENT_TOKEN_TO_BE_REPLACED

With reported hostilities against Israeli journalists and the flag of the Palestinian territories flying on the streets and in the stadiums, it is clear the World Cup in Qatar is ... END_OF_DOCUMENT_TOKEN_TO_BE_REPLACED

Past attempts to reconcile logic and belief within Islam tend to be dismissed today – not because they lack merit, but because they were politically defeated, argues Mustafa Akyol END_OF_DOCUMENT_TOKEN_TO_BE_REPLACED

When is it and when is it not acceptable to display a political banner at the World Cup in Qatar? The answer seems to depend largely on the political message, with fans ... END_OF_DOCUMENT_TOKEN_TO_BE_REPLACED

Nouara may be 65, but she is ready to join thousands of others who burn their ID and pay traffickers for the chance of a new life in Europe. Zineb Bettayeb reports END_OF_DOCUMENT_TOKEN_TO_BE_REPLACED

END_OF_DOCUMENT_TOKEN_TO_BE_REPLACED
Social media
and networks
Subscribe to our
newsletter