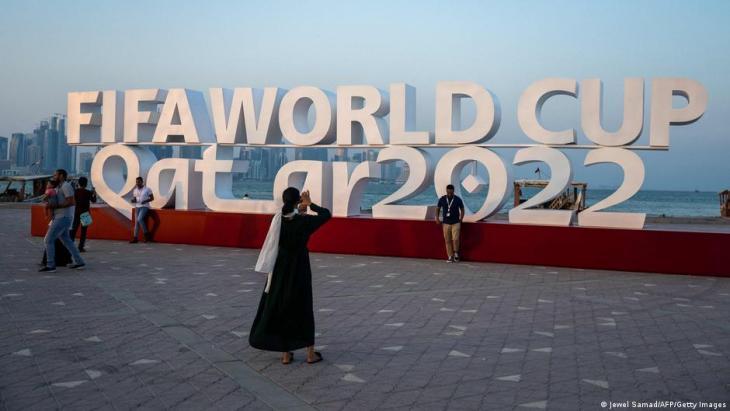 All organisers use major sporting events like this year’s FIFA World Cup in Qatar primarily to advertise their country and promote a slick public image. This is not something we need to be involved in, writes Samuli Schielke in his commentary

Fans are becoming increasingly critical of the upcoming FIFA World Cup in Qatar, and rightly so. Qatar is one in a long line of countries that has jumped on the international sporting event bandwagon (think of the 2018 World Cup in Russia and the 2022 Olympic Games in China, climate conferences, world exhibitions and the like) to raise their international profile. In doing so they seek to distract from their exploitative, violent and unsustainable practices.

The ruse works well because so many people, even from the affluent West, want to be part of these supposedly major events. The pledges and lofty speeches sound nice. And many people in the West get to cash in on the spectacle. It’s what political scientists call whitewashing.

We too are guilty of exploitation

But the problem has less to do with Qatar and more to do with international professional sport. Qatar has long exploited workers and will continue to do so, just like many other countries, including those in the western world.

Most of the time such practices do not take place within national borders, but in production facilities located elsewhere. Yet the initiative United Against Modern Slavery has uncovered nail studios that are bringing their staff to Europe and the USA on gagging contracts. These workers are condemned to spend the first few years working off the cost of their travel and visas. Now the situation has started to bother us, and that's good. 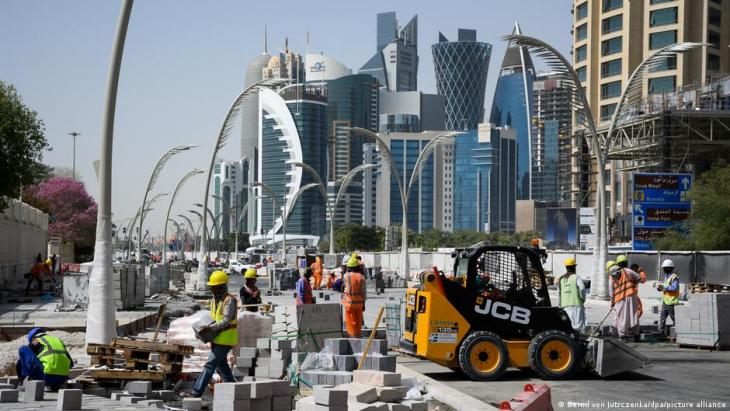 Like all other Gulf states, Qatar has an exploitative system of issuing visas linked to work contracts. Workers are dependent on the will of their "sponsor" and cannot freely change jobs. Although this so-called kafala system has been abolished in Qatar (the only Gulf state to do so), it probably still exists in practice in parts. Trade union organisation and strikes are not allowed. However, exploitation also exists in Europe and the USA, writes Samuli Schielke and reminds us of the employees of nail salons who are lured from abroad and then first have to pay off alleged visa fees for years

Admittedly, it's a bit late, as we've all known for years that international football is corrupt to the core. What’s more, since 2015, we have also known that Germany bought the 2006 World Cup. The 2022 World Cup, purchased by a country that also buys its sporting talent, is merely the culmination of an altogether outrageous policy of beautiful appearances by questionable parties.

Not slavery, but capitalism

The entire world of professional football is complicit. I will indeed be boycotting the 2022 World Cup; if possible, I will do the same with all international professional sport. For the same reason, I did not watch the last Olympic Games in 2020, even though conditions for workers in Japan are much better.

The FIFA World Cup will still take place, and the workers in Qatar also have an interest in that. They want jobs. If there were no World Cup, they would have nothing; just as factory workers in Bangladesh are not better off when I don't buy a new shirt, but only when they are paid more of the price of my new shirt as wages.

As with all other Gulf states, Qatar has an exploitative system of issuing visas linked to labour contracts. Workers are dependent on the will of their "sponsor" and cannot freely change jobs. (Editor’s note: The so-called Kafala system was officially abolished, but according to human rights activists, parts of this system still exist in practice).

Belonging to a trade union and going on strike is a crime. That said, I don't think much of the comparison with slavery. The exploitation of workers in Qatar and elsewhere today is not slavery, but capitalism. It also affords European companies investing in the region handsome profits.

FIFA deserves to be abolished

These days, such conditions are no longer a secret, and that is good. If the staging of the FIFA World Cup had been made conditional on a fundamental reform of the visa and labour laws, more progress might have been made. Were FIFA really an organisation that is primarily interested in fair play and the well-being of people, it wouldn't be unrealistic to hope that something like this would at least be made a condition for future tournaments.

But FIFA in its present form is dedicated to a very different set of goals and deserves to be abolished. Meanwhile, my hope is that while the World Cup matches are held and the workers paid their salaries and bonuses, the tournament itself generates as little interest as possible. After all, its real purpose is to advertise the country and its slick public image. This is not something we need to be involved in.

Samuli Schielke is a lecturer at the Leibniz Centre for Modern Oriental Studies in Berlin with a focus on Egypt and the Gulf States.

Recent efforts to rehabilitate Assad are setting a damaging precedent for accountability, just as the international community is expressing the need to hold Russia to account for ... END_OF_DOCUMENT_TOKEN_TO_BE_REPLACED

Nouara may be 65, but she is ready to join thousands of others who burn their ID and pay traffickers for the chance of a new life in Europe. Zineb Bettayeb reports END_OF_DOCUMENT_TOKEN_TO_BE_REPLACED

Education for girls and women is still possible in Afghanistan, says Reinhard Eroes of the Kinderhilfe Afghanistan initiative. In interview with Elisa Rheinheimer, he talks about ... END_OF_DOCUMENT_TOKEN_TO_BE_REPLACED

Locals in the Middle East have said European critics are showing bias and hypocrisy when they condemn Qatar. Observers agree that Qatar has had to deal with more criticism than ... END_OF_DOCUMENT_TOKEN_TO_BE_REPLACED

In Doha, Arabs from Morocco, Tunisia, Egypt and Algeria are gathering to celebrate the first ever FIFA World Cup to be held on Arab soil. The criticism from Europe? Over the top, ... END_OF_DOCUMENT_TOKEN_TO_BE_REPLACED
Author:
Samuli Schielcke
Date:
Mail:
Send via mail

END_OF_DOCUMENT_TOKEN_TO_BE_REPLACED
Social media
and networks
Subscribe to our
newsletter