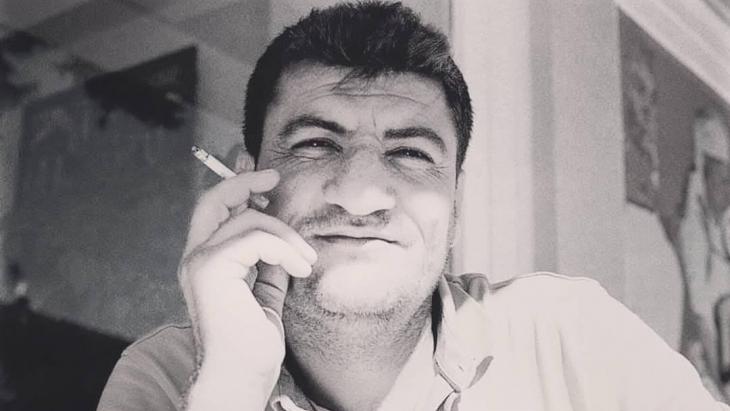 On 23 November 2018, Syrian activist and civil society leader Raed Fares was shot dead by gunmen in Kafranbel, Idlib province. Committed to building a free press, empowering women and establishing the foundations for a democratic society, he left a legacy to inspire generations of activists. By Marta Vidal

"Black Friday Special Offer" read a banner held by activists in Kafranbel, a small town in northern Syria. "Bring your enemy and come to fight in Syria for free". When the Syrian uprising against the authoritarian regime of Bashar al-Assad began in 2011, Kafranbel protesters displayed eye-catching messages on a weekly basis. "ASSad is the source of terrorism," read another.

Often accompanied by drawings, these witty messages denouncing the brutality of Assad’s regime and its allies made Kafranbel, a previously unheard of town in the Idlib province, famous. "The banners of Kafranbel remain the best witness and expression of the dreams of most Syrians," wrote the Syrian novelist Khalid Khalifa in his foreword to the book ‘Dancing in Damascus’. Thanks to its creativity and wit, the town soon became known as "the conscience of the revolution".

Raed Fares was the mastermind behind the banners. A pro-democracy activist and organiser, he founded a radio station, helped develop a new civil society in the Idlib province and led efforts to draw international attention to Syria’s plight. 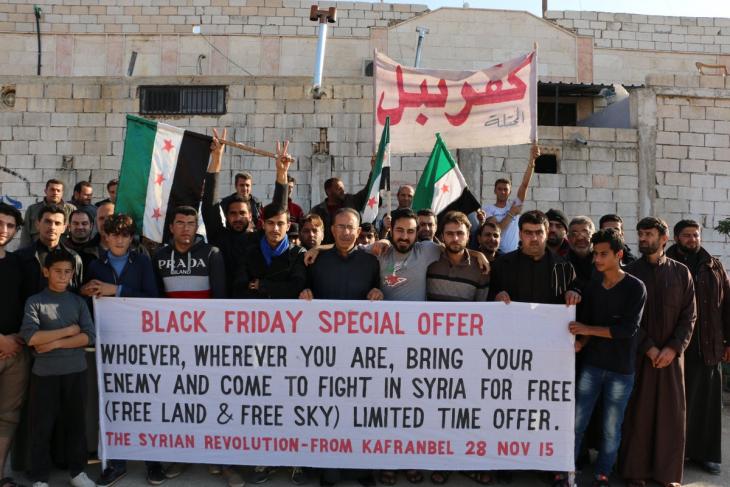 The conscience of the revolution: often accompanied by drawings, these witty messages denouncing the brutality of Assad’s regime and its allies made Kafranbel, a previously unheard of town in the Idlib province, famous. "The banners of Kafranbel remain the best witness and expression of the dreams of most Syrians," wrote the Syrian novelist Khalid Khalifa in his foreword to the book ‘Dancing in Damascus’

But his work to build a free press, empower women and establish the foundation for a democratic society angered the extremist groups that started to proliferate as the war escalated. Last year, on 23 November, Fares and fellow activist Hamod Jnaid were assassinated by gunmen in Kafranbel. But for many activists his legacy will live on.

Fifty years of oppression and pain

"Revolutions are ideas, and ideas cannot be killed with weapons," said Fares in a speech at the 2017 Oslo Freedom Forum. Invited to speak about his work fighting for a free and democratic Syria, he told the audience in Oslo that Syrians are victims of two kinds of terrorism. On one hand the Assad regime and its allies, on the other Daesh and other extremist groups.

When demonstrations against the Assad regime spread across Syria, Fares started filming events in his hometown. He recorded hours of footage of protests and the government’s brutal crackdown.  At the forum in Oslo he showed a short video of burning houses, scorched earth and several injured in the aftermath of an airstrike in Kafranbel. "What is impossible for me to show you," he told the audience, "is the smell of burnt blood. The smell of body parts, of gunpowder. The smell of 50 years of oppression and pain is carved in my memory."

Germany’s electorate includes some 7.4 million citizens with international roots, while many more millions of residents from abroad aren’t allowed to vote. Both groups are often ... END_OF_DOCUMENT_TOKEN_TO_BE_REPLACED

The disappearance of Razan Zeitouneh and her colleagues has been one of the greatest mysteries of the Syrian war – until today. DW's investigative unit hunted clues across six ... END_OF_DOCUMENT_TOKEN_TO_BE_REPLACED

Millions of people in Syria's Idlib region depend on foreign aid that passes through only one border crossing. The UN mandate regulating passage through it will expire on 10 July ... END_OF_DOCUMENT_TOKEN_TO_BE_REPLACED

By stage-managing his re-election in a poll widely dismissed as a farce, Syria's President Bashar al-Assad has killed two birds with one stone: he has forced his compatriots to ... END_OF_DOCUMENT_TOKEN_TO_BE_REPLACED

Although a unity government was formed in Libya in March 2021, tensions and possible crises between the political actors are already emerging. What problems does the country face ... END_OF_DOCUMENT_TOKEN_TO_BE_REPLACED
Author:
Marta Vidal
Date:
Mail:
Send via mail

END_OF_DOCUMENT_TOKEN_TO_BE_REPLACED
Social media
and networks
Subscribe to our
newsletter