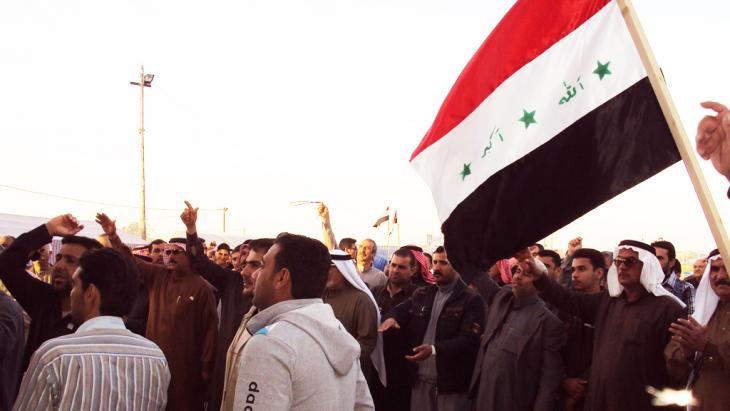 Fighting in the Iraqi province of Anbar

"Maliki is the new Saddam!"

The images coming out of the Iraqi province of Anbar shocked the world: masked fighters from the Islamic State of Iraq and Syria (ISIS) were seen patrolling the cities of Ramadi and Fallujah, waiting to take them over. Baghdad's central government seems to be losing its grip on the country's largest province. From Birgit Svensson in Fallujah

Ever since heavy fighting broke out between government troops and the Islamist rebels in the Iraqi province of Anbar, the government in Baghdad has been on tenter hooks. Prime Minister Nouri al-Maliki has alerted Washington and asked that the promised Hellfire missiles and drones be delivered as quickly as possible. Maliki's former security adviser, Muafak al-Rubaie, implores Iraqis to stand united in the fight against terrorism. Fallujah – the Americans' nightmare – is now threatening to become a disaster for the Iraqi government too. But the fact of the matter is that the conflict is home-made.

The flags are unmissable. They are the same flags used by Saddam Hussein. From just after the last checkpoint on the road to Fallujah right up to the square on the main street where the demonstrations are taking place, they wave proudly in the breeze. While the army bases along the 80 kilometres of road from Baghdad are marked by black flags with religious Shia writing, no soldier has set foot in the city with its majority Sunni population since the beginning of the protest movement in late 2012. And the intention is that it will stay that way.

Although the army has surrounded the city in the past few days, they have not entered it. The protesters gathered on the square agree that if the soldiers were to enter the city, they would be lynched. "The people of Fallujah have no faith in the army." Saddam's flag, with the three stars of the Baath Party, has become a symbol of resistance to the central government in Baghdad. 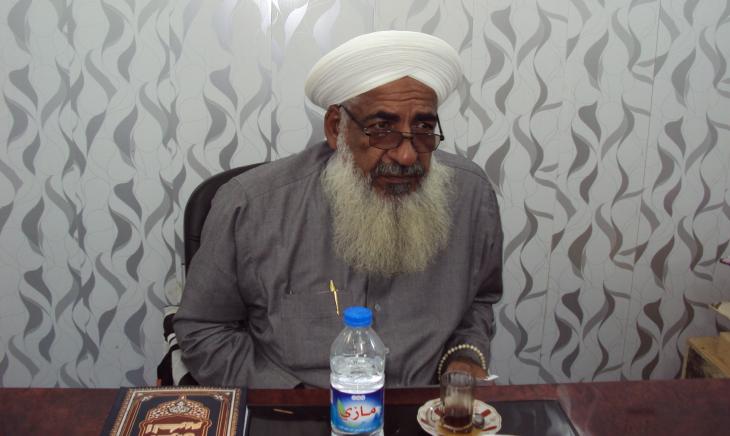 Sheikh Khaled Hamood al-Jumaili, the founder of the protest movement in Fallujah, was recently assassinated when he met with al-Qaeda representatives to encourage them to leave the city. According to a close friend, the sheikh was equally opposed to Maliki’s government and al-Qaeda

The "imam without a mosque"

"Maliki is the new Saddam!" Sheikh Khaled Hamood al-Jumaili looked fierce and bitter as he said these words, his hatred for the prime minister in Baghdad shining through. "The weaker he and his government become on the domestic front, the stronger they have to appear on the outside," he continued.

According to Jumaili, there have been thousands of arrests; women and children have been taken. In response, the "imam without a mosque", as the Sunni preacher was known in Fallujah, founded the protest movement. For more than a year now, people have been coming to the tents in the square every day, signing petitions, lobbying for their demands, listening to speeches and loudly voicing their frustration.

They are demanding the release of prisoners, a greater say in politics and a chance in the new Iraq. Sheikh Jumaili became the leading figure in the Sunni fight against the Shia prime minister. However, in contrast to the civil war in the years 2006 and 2007, the current conflict cannot be said to revolve around ethnic or religious differences.

"It is a fight of the underprivileged against the privileged," said the sheikh. "Actually, it is a fight against Nouri al-Maliki." Maliki, he continued, is dividing the Iraqis instead of reconciling them. Like Saddam, he apparently favours those who are loyal to him. "And his supporters are mostly Shias."

Khaled Hamood al-Jumaili was recently assassinated. Unknown armed men ambushed him while he was meeting with members of al-Qaeda in Fallujah's industrial zone to ask them to leave town, a close friend of the sheikh reports. "His protest was directed equally against al-Maliki and al-Qaeda", he says, summing up Jumaili's legacy. A suspect has since been arrested. Since then, the events in Anbar have come thick and fast.

Bloodiest battles since the withdrawal of US troops

The bloodiest battles since the withdrawal of US troops began in late December when Maliki ordered the Iraqi army to clear the protest camp in Ramadi, Anbar's provincial capital. For four years, the prime minister has also held the offices of minister of defence and minister of the interior, and therefore has direct access to the country's security forces. 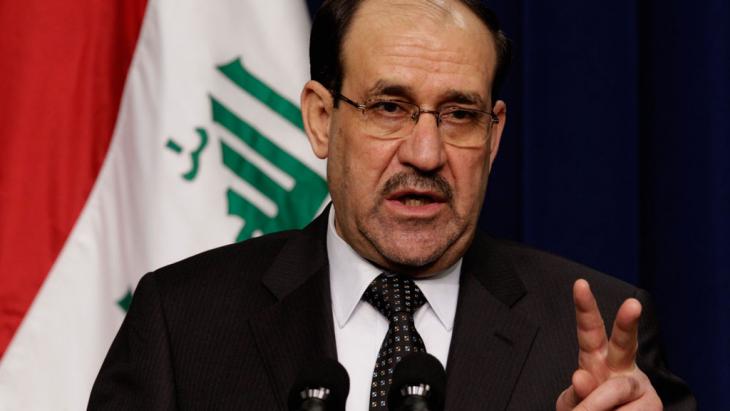 A figure of hate for Sunnis: the clashes in Anbar have been fuelled by Sunni rage against the Shia-dominated government of Prime Minister Nouri al-Maliki, which they feel puts them at a disadvantage. Many Sunnis also feel oppressed by the security forces, which are dominated by Shias

Vehicles that apparently belonged to terrorists and were heavily laden with weapons were attacked from the air. The inhabitants have not confirmed that these vehicles belonged to ISIS fighters. They have confirmed, however, that the al-Qaeda terrorists who used to have a stronghold in Anbar have returned.

The fighting in Ramadi ultimately spilled over into Fallujah. The government in Baghdad speaks of 250 deaths, including 25 fighters from "groups closely connected to al-Qaeda". In an audio message, the ISIS spokesman Abu Mohammed al-Adnani called on the Sunnis to continue fighting the Shia government: "Do not lay down your arms, or the Shias will enslave you."

Prime Minister Maliki has urged the population to leave both cities. The governor of Kerbela, the Shias' holy city, invited "Sunni brothers and sisters" to seek refuge with him. Maliki's home village is not far from Kerbela. According to UN estimates, over 5,000 families have already fled Fallujah.

According to the UN special representative for Iraq, Nickolay Mladenov, the situation there is particularly precarious. Due to the army's siege of the city, "food is becoming scarce". There are similar shortages in the supply of water and medicine.

It appears that Maliki is aware of Fallujah's bad disposition towards him. In any case, he has delayed the planned military intervention. Instead, tribal leaders are to be given money and weapons so that they can fight ISIS, the new al-Qaeda, themselves. The prime minister's office now says that the army will only intervene if Fallujah's security forces call for backup.

Initial clashes have already taken place between tribal leaders and terrorists in the districts of al-Askari and al-Shuhada, not far from the square where the demonstrations have been taking place. "However, we will also point our weapons at the army if they march into town", says Sheikh Rafa al-Jumaili, one of the tribal leaders in Fallujah. The inhabitants of Fallujah will not let themselves be used to close the ranks behind Baghdad's disputed head of government.

An interview by Foreign Minister Mohammed Javad Zarif has provoked outrage in Iran. In it, Zarif criticised the Revolutionary Guards' destructive role in both the nuclear ... END_OF_DOCUMENT_TOKEN_TO_BE_REPLACED

In Islamic mysticism, Ramadan is more than just a period of prescribed abstinence, signifying an opportunity for inner contemplation. Marian Brehmer explores the spiritual ... END_OF_DOCUMENT_TOKEN_TO_BE_REPLACED

The USA and NATO plan to withdraw from Afghanistan by September. The operation is risky, the outcome uncertain. Many Afghans fear civil war. The quake on the Hindu Kush will also ... END_OF_DOCUMENT_TOKEN_TO_BE_REPLACED

The Prophet Muhammad never executed anyone for apostasy, nor encouraged his followers to do so. Nor is criminalising sacrilege based on Islam’s main sacred text, the Koran. In ... END_OF_DOCUMENT_TOKEN_TO_BE_REPLACED

Surging coronavirus cases in many parts of the world have overshadowed the start of this year's Muslim holy month of Ramadan, with festivities once again curtailed by contagion ... END_OF_DOCUMENT_TOKEN_TO_BE_REPLACED

German Middle East analyst Guido Steinberg and television journalist Ulrich Tilgner have both published new books on the conflicts in the Middle East. Their analyses and their ... END_OF_DOCUMENT_TOKEN_TO_BE_REPLACED
Author:
Birgit Svensson
Date:
Mail:
Send via mail

END_OF_DOCUMENT_TOKEN_TO_BE_REPLACED
Social media
and networks
Subscribe to our
newsletter