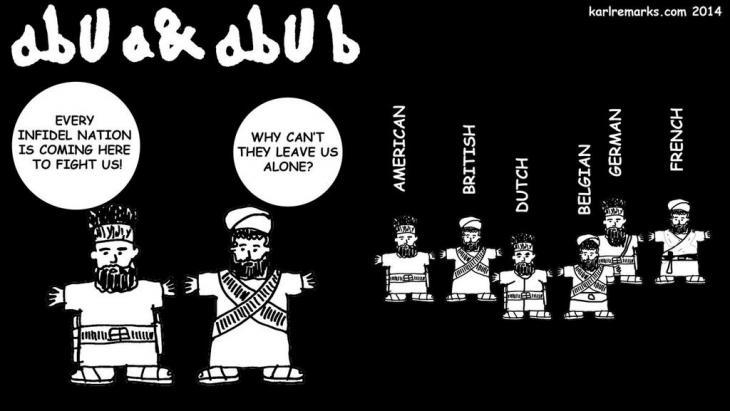 Reports and videos of Islamic State's horrendous deeds have left many people around the world speechless with shock. But for many Arabs – both in the countries affected by IS and elsewhere around the globe – the only way to fight IS is to satirise and ridicule it. Elisabeth Lehmann has the details

Abu Bakr Al-Baghdadi, the self-appointed caliph of the Islamic State, is strolling the streets of the town as the old caliphs did, to enquire after the wellbeing of his subjects. He comes across a poor man whose shoes are so ragged that his toes are poking out. Deeply affected by the poor man's poverty, Baghdadi bursts into tears. Touched by the man's fate, he wants to help and sends one of his followers to the man the next morning. The helper finds him in the same place, with the same ragged shoes. He tells the man that the caliph has sent him – and promptly chops his toes off.

This cruel joke is doing the rounds on the Internet. Yet for many Arabs, humour is the only way to face up to the IS terror and mentally liberate themselves from it. Whereas the West was long shocked into inactivity by the militant Islamists, their atrocities have fired the imagination and creativity of many Arabs.

"IS is so extremist that it provides a lot more material for satire than other movements," says the Lebanese-Iraqi blogger Karl Sharro. On his blog "Karl reMarks", he has been ridiculing the "caliph" and his fighters for some weeks, for instance inventing the comic warriors Abu A and Abu B.

Ridicule as a weapon

In one episode, the two jihadis come across a couple of extra terrestrials who dare to question the Muslim faith of the fighters, as neither A nor B speaks Arabic. Their only knowledge of Islam comes from a handful of videos on the Internet. When the aliens question them more closely, Abu A angrily asks "Are you questioning my faith?" "God forbid," replies the alien, "it just doesn't seem that you know it very well." Asked how he knows the word God, the alien says he picked up the word from sitcoms. That calms Abu A down and they get involved in a friendly chat about how "The Big Bang Theory" is better than "Friends".

Sharro plays on the barely existent Islamic background of many IS fighters and their ideological double standards – and he's not alone. A satire video by the group "Watan a Watar" from Ramallah has now racked up almost a million clicks. In the film, the Palestinian comedians ridicule an IS propaganda video. Car drivers are stopped on the road and asked about the rules of Islam. Anyone who doesn't answer correctly is shot, earning the fighters religious points to get into paradise.

In between, one of the IS men drifts off into sweet memories of his adventures in Beirut's nightlife district, where there are so many pretty girls. When a Christian comes along, the militiamen sense an opportunity. Killing people of other faiths gets them extra points. But the terrified Christian has a heart attack and falls down dead. The IS fighters panic: "Oh no! Dear Christian, please get up again for us so we can shoot you. Then you can die again."

The caliph on the couch

Even the so-called "caliph" himself is a popular object of ridicule. The blogger Karl Sharro, for example, has "reconstructed" a session between Baghdadi and his psychiatrist. Having declared the caliphate, Baghdadi doesn't quite know what to do next. There isn't a handbook for establishing a caliphate, after all. The psychiatrist advises him to look it up on Google. Baghdadi is wondering whether to start wearing a big turban, maybe in mauve or pistachio with a silver pin. Or perhaps that would make him look ridiculous.

Like all comedians, Sharro has to face accusations that stories like this trivialise IS. His answer is that the opposite is in fact the case: "We Arabs should be breaking taboos now, not creating new ones! It would be a false kind of political correctness not to talk about IS or make jokes about them."

There's one thing Sharro does have to admit, though – he's far away from the setting itself. "I live in London. I'm not directly affected. And that puts me in the rather comfortable position of being able to do such things." 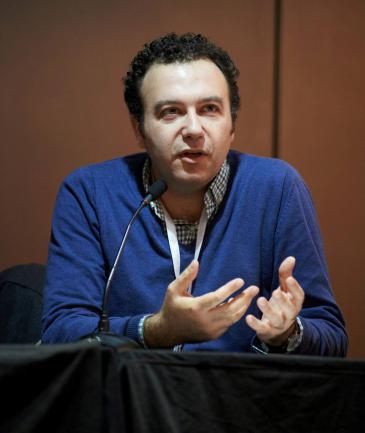 Disarmingly satirical: in his blog, the London-based Lebanese-Iraqi blogger Karl Sharro casts a satirical eye over developments in the Middle East. Says Sharro: "We Arabs should be breaking taboos now, not creating new ones! It would be a false kind of political correctness not to talk about IS or make jokes about them."

The Beirut band "The Great Departed" is in a different situation. Lebanon touches directly on the IS territories, from where thousands have fled across the border to escape the atrocities. Nevertheless, "The Great Departed" decided to fight IS with the weapons the fundamentalists most eschew: culture and music. They've been performing their hit "Madad Baghdadi" in night clubs for several weeks now, praising the "triumphator through divine laws" to the sound of Arab-style music, the man who "will lead God's disciples – into the abyss."

Remarkably, many satires come directly from the countries at stake. The Iraqi broadcaster Al-Iraqiya has dedicated a cartoon to IS, which is known as "Daesh" in Arabic. "The Daeshist" depicts the life of an IS fighter with all its pitfalls. Carrying out explosive attacks, for example, doesn't come naturally right away. The clumsy Daeshist injures his superior before accidentally shooting him dead because he's holding his gun the wrong way round.

The news that the IS cook recently died under mysterious circumstances prompted the Iraqi broadcaster "Al-Shahed Al-Mustaqil" to wonder whether he poisoned himself with the "cheese of the caliph". In a mock cheese advert inspired by the original "Kiri" brand, the claim goes, "The cheese of the caliph. Take it along wherever you want to blow yourself up." In a sideswipe at the IS's moral commandments, the "Kiri" cow's udder is pixelated.

Many Arabs can find no better way of dealing with IS than ridicule or provocation – and thus use very drastic means in some cases.

One of the most provocative acts so far was by the Egyptian feminist Aliaa Elmahdy. On her Facebook page, she posted a photo of herself and another woman naked, menstruating and defecating on IS's black flag. Since then, Elmahdy has been bombarded with hostility and death threats.

She stands up to these reactions via the internet, publishing the messages of hate on an almost daily basis. And she has at least given other users inspiration for barbed remarks against the terrorist militia. Under the hashtag "#AskIslamicState", the Twitter user WAEL posted Elmahdy's provocative photo with the comment: "Say hello to your virgins."

Home
Print
Newsletter
More on this topic
Humour in the West Bank: "I laugh, therefore I am"Humour in the Islamic world: Digging at the despotsBassem Youssef: Satire in the Service of DemocracyThe Lebanese satirical magazine "Ad-Dabbour": Hornets' nest in BeirutCreative Protest against Syria's Regime: The Puppet Rebellion
Related Topics
'Islamic State' | IS, Arab comics, Cartoons, Comedy, Jihadism | Jihadists, Media in the Arab World, Satire
All Topics

A French artist has used photos of torture from Abu Ghraib for an oversized artwork at the Berlin Biennale. Reactions from fellow artists have been mixed, with some criticising ... END_OF_DOCUMENT_TOKEN_TO_BE_REPLACED

Since Ali Khamenei, Iran's most powerful man, has openly and unconditionally come out in support of Putin's war in Ukraine, logistical help is on its way, with an allegedly ... END_OF_DOCUMENT_TOKEN_TO_BE_REPLACED

The Palestinian militant organisation Hamas, with Hezbollah's help, is building up a military presence in Lebanon, the ultimate consequences of which could be devastating, writes ... END_OF_DOCUMENT_TOKEN_TO_BE_REPLACED

In this essay, renowned Lebanese journalist and writer Hazem Saghieh asks whether the Arab Levant, which stretches from Iraq in the east to Egypt in the west, will remain an ... END_OF_DOCUMENT_TOKEN_TO_BE_REPLACED

Extreme drought in Iraq has given German and Kurdish archaeologists the unique chance to examine an ancient Bronze Age city that was hidden beneath the water of a reservoir for ... END_OF_DOCUMENT_TOKEN_TO_BE_REPLACED

With his fist bump greeting for a man he previously called a pariah, US President Biden has paved the way for Saudi Crown Prince Mohammed bin Salman's return to the international ... END_OF_DOCUMENT_TOKEN_TO_BE_REPLACED
Author:
Elisabeth Lehmann
Date:
Mail:
Send via mail

END_OF_DOCUMENT_TOKEN_TO_BE_REPLACED
Social media
and networks
Subscribe to our
newsletter