In Western eyes, it makes sense for Pakistan and India to cooperate with Afghanistan in crushing the Taliban. However, Pakistan's military views an alliance between its two neighbours as the gravest threat Pakistan faces today. Irfan Husain takes a look at the history of the conflict

On 7 July a suicide attack hit the Indian embassy in Kabul. "The enemies of Afghanistan and India's relationship cannot hamper our relationship," an Afghan official declared

​​Immediately after the devastating blast at the Indian embassy in Kabul on 7 July that left nearly 50 dead, the Karzai government named "a regional intelligence agency" as the mastermind behind the suicide bombing. This was a thinly veiled reference to Pakistan's Inter-Services Intelligence or ISI.

The explosion also highlighted the growing power of the Taliban. Within the last few months, they have tried to assassinate President Karzai at a military march-past in Kabul, as well as carrying out a daring attack at the international Serena Hotel in the capital. Written off as a fighting force after they were swept from power soon after the American-led invasion of Afghanistan in the wake of 9/11, the Taliban have come roaring back.

The border – a "land-grab" by the British

Dividing Pakistan and Afghanistan is the Durand Line, an ill-defined and virtually unmarked border imposed by the British to separate their Indian colony from a turbulent neighbour in 1893. Kabul has always considered that the Durand Line constituted a land-grab by the British, and that this arbitrary frontier divided Afghan tribes. The lack of any mutually agreed border is one of the basic problems besetting the region. 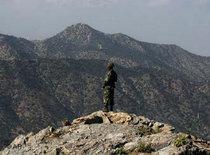 A Pakistan army soldier monitors the Afghan-Pakistan border at Kundigar post. The al-Qaida terror camps are gone from Afghanistan, but the threat of the Taliban insurgents hangs over the lawless borderlands

​​After the Soviets invaded Afghanistan in 1979, gunrunning and heroin production soared, and warlords with access to American-supplied funds and arms displaced tribal elders who were generally respected pro-government figures. With the defeat of the Red Army in 1988, various Afghan factions entered a period of infighting that developed into a full-scale civil war. Seeking to stabilise the situation in Pakistan's favour, the ISI supported the Taliban, a small group of madressa graduates who had studied in Pakistan.

If the Taliban are stronger today than they have been in the last six years, a major reason is the availability of safe havens in the tribal areas in Pakistan. Equally clearly, they would have been unable to find sanctuary in these badlands without the ISI's cooperation.

Every army, even the Taliban, needs money to fight. Here, heroin production and export is playing a key role in financing the insurgency. The Taliban are now charge protection money for this traffic. 'Five-dollar Taliban' are doing the bulk of the fighting, with bonuses being paid for each Western soldier killed.

Shaheed or martyred Taliban are promised a place in heaven, and their families are provided for. In a region without work or prospects, a few months of campaigning with the Taliban is often the only choice available. Another factor motivating these primitive holy warriors is the notion that if the West prevails, Afghan women will be forced to take off their all-enveloping burqas, and wear skirts. 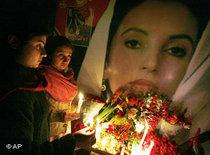 ​​As the war continues in Afghanistan, the fallout in Pakistan has been lethal. Last year, there were over fifty suicide bombings, with nearly a thousand people killed. Various Islamist factions who support their Afghan cousins across the border now style themselves the Pakistani Taliban. Their leader, Baitullah Mehsud, has been accused of being the mastermind behind Benazir Bhutto's assassination on 27 December, 2007. The Taliban grip over Swat, a popular tourist destination barely 150 kilometres from Islamabad, shows how fast their influence is spreading.

After a wave of attacks aimed primarily at security forces across Pakistan, the newly elected government entered into negotiations with Mehsud, and agreed to withdraw the army from the tribal areas under his control in exchange for a guarantee that he would cease his attacks in Pakistan. Obviously, this attempt by Islamabad to achieve a separate peace has been viewed with suspicion and apprehension by both Karzai and his Western backers.

Pakistan has long regarded its north-western neighbour as its backyard. Most Afghan imports traverse Pakistani soil to reach the landlocked nation; for over a decade, three million refugees sought shelter in Pakistan from the fighting in their country following the Soviet invasion and the subsequent civil war; and a common language and culture binds millions of Pakistani and Afghan Pashtuns, the ethnic group from which almost all Taliban are drawn.

Afghanistan, chess board of regional powers

Irfan Husain: "Islamic militants on both sides of the border should be viewed as a single force"

​​More crucial still is the concept of 'strategic depth' that has dominated the thinking of successive generations of army officers in Pakistan. As the country is geographically narrow, there has been a fear among military planners that India could cut it into two in a conflict. It was therefore deemed important to have an area where the army could pull back to continue fighting. This was seen to lie in Afghanistan, and it is largely as a result of this strategy that Pakistan has dabbled for years in Afghan affairs.

Logically, Islamic militants on both sides of the border should be viewed as a single force, and fought in both Pakistan and Afghanistan under a joint command. But due to Pakistani suspicions of Afghan links with India, this is unlikely to happen, especially as the recently elected government remains divided on strategy.

"India is not the eternal foe"

In Western eyes, it makes sense for Islamabad and New Delhi to cooperate with Kabul in crushing the Taliban. Islamic militancy threatens all three, and it would be in their interest to form a common front against this growing menace. However, Pakistan's generals have run the country's Afghan and Indian policies for decades, and they view an alliance between its two neighbours as the gravest threat Pakistan faces today. They are thus being driven to keeping the Taliban onside, weakening the Karzai government, as well as striking at Indian interests in Afghanistan.

As long as the Pakistani army remains convinced that its existential threat lies on its eastern border, its focus and resources will stay there, while it uses the Taliban as proxies to pre-empt the perceived Indian attempt to outflank it in Afghanistan. A solution of the Kashmir issue would go a long way in convincing the army that India is not the eternal foe.

Irfan Husain writes two weekly columns for Dawn, Pakistan's biggest and most influential English daily. After working in the Pakistani civil service for 30 years, he was president of a private university in Karachi for five years. He now divides his time between England and Pakistan. He has contributed to publications around the world during his freelance career spanning three decades.

Elections in Pakistan
Of Winners and Losers
As election results continue to trickle after the 18 February elections in Pakistan, it is clear that what is happening is little short of a tsunami that has transformed the political landscape overnight. Irfan Husain reports

Commentary by Tariq Ali
Poor Pakistan
Benazir Bhutto's legacy does not look very promising according to renowned Pakistani-British historian and philosopher Tariq Ali. In his view, Pakistan and Bhutto's People's Party deserve something better than a mere dynastic succession

END_OF_DOCUMENT_TOKEN_TO_BE_REPLACED
Social media
and networks
Subscribe to our
newsletter