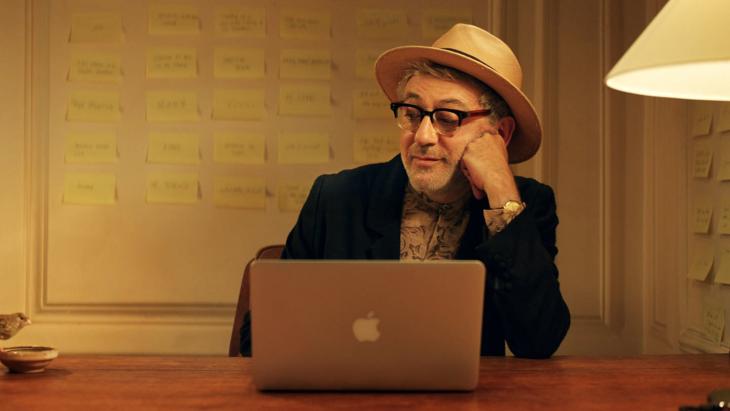 Palestine is disappearing. From the international agenda, from the map, as a concept. The filmmaker Elia Suleiman from Nazareth reacts in the only possible way: using the language of the absurd, says Stefan Buchen in his review

A modern philosopher once spoke of the impossibility of taking up a location outside of certain mechanisms, a vantage point from which the spectre in question might be named. The philosopher was Theodor W. Adorno, who may have overlooked the possibilities of cinema.

The film character Elia Suleiman takes a position outside of the mechanisms he is dealing with. He has left them behind. One suspects that he used to be part of these inner workings. But they spat him out, so to speak, so now he can only observe things from the outside.

It is possible to stage such events cinematically. Elia Suleiman is in the film. He even has a pronounced visual presence in it. And yet he is also remote from what is going on, on the outside. He doesn't speak. He only listens to what others are saying. He seems to hear what has been said. Whether he wants to hear it is slightly doubtful.

So it is impossible for Elia Suleiman, the silent film character, to call the spectre by its name. The director Elia Suleiman instead takes on this role. Which brings us to the movie as a whole.

The gradual fading of Palestine

The spectre is the gradual fading of Palestine, its disappearance from the firm ground of hard facts. In this respect, the director has created a sequel to his first work from 1996 – "Chronicle of a Disappearance".

At the beginning a priest with a magnificent beard, in an even more magnificent robe, carrying a staff and followed by a solemnly singing congregation, goes to stand in front of the church. It must be Christmas or Easter. The ritual requires that the church door be unlocked from the inside and opened – as if by an invisible hand – so that the community of the faithful can enter. That doesn't happen, however. Those who are supposed to open the door from the inside refuse to play along. The ritual comes to a halt.

From one moment to the next the priest abandons all solemnity and hisses angrily: "Open the door, you ass." A youthful voice can be heard from the inside. The man of God is told to get stuffed. "I won't open the door." The priest curses and takes the side entrance. Then we hear him beat up the insolent youth in the church.

What follows seems to have nothing to do with this opening scene, except that the location of the action is initially the same. It is probably Nazareth. One short episode chases the next. The formal link is the presence of the increasingly marginalised Elia Suleiman.

A hunter tells him how he shot down a circling eagle that was about to swoop down on a snake. The snake thanked him later. His car had a flat tire, which the snake re-inflated. He saw how it took a deep breath and blew it up again. The expression on the face of Elia Suleiman as he listens does not reveal much; at most that he does not think it completely impossible.

Fighting for the taste of home

An attractive young woman is eating a Palestinian poultry dish on a restaurant terrace. Two men drink whisky in sync, keeping her company. She complains to the host that the sauce is too acidic. He explains that the acid comes from white wine. It's supposed to be like that. The mood tenses over the contradiction between the woman's indignation about the discreet but natural presence of alcohol on her plate and the simultaneous carefree way the men pour hard liquor down their throats.

Elia Suleiman observes it as a solitary restaurant guest. He drinks arak, Palestinian anise liquor diluted with ice. One suspects that he, secretly allied with the host, is fighting in support of good taste, the taste of home.

When it comes to talent, Palestine may well be able to compete with other football teams in the region, but growth and development are hampered by the situation in the Palestinian ... END_OF_DOCUMENT_TOKEN_TO_BE_REPLACED

The change in U.S. president is also having an impact on the conflict between Turkey and Greece. Since the USA has started to play the Greek card, the strategic situation in the ... END_OF_DOCUMENT_TOKEN_TO_BE_REPLACED

Years ago, the International Holocaust Remembrance Alliance formulated how hatred of Jews can be recognised. Now a new definition is causing controversy. By Sarah Judith Hofmann END_OF_DOCUMENT_TOKEN_TO_BE_REPLACED

As someone accustomed to presenting his country to interested outsiders, Israeli teacher and tour guide Noam Yatsiv makes the case for a more nuanced appreciation of the ... END_OF_DOCUMENT_TOKEN_TO_BE_REPLACED

Jewish voices are much more diverse than the public often sees. Jewish men and women who oppose the injustice of Israeli occupation in the West Bank deserve our respect and ... END_OF_DOCUMENT_TOKEN_TO_BE_REPLACED

The Germans have a fragmented perception of the conflict between Israel and the Palestinians, and their discourse is dominated by certain catchphrases. All the while, there is a ... END_OF_DOCUMENT_TOKEN_TO_BE_REPLACED
Author:
Stefan Buchen
Date:
Mail:
Send via mail

END_OF_DOCUMENT_TOKEN_TO_BE_REPLACED
Social media
and networks
Subscribe to our
newsletter