A modern philosopher once spoke of the impossibility of taking up a location outside of certain mechanisms, a vantage point from which the spectre in question might be named. The philosopher was Theodor W. Adorno, who may have overlooked the possibilities of cinema.

The film character Elia Suleiman takes a position outside of the mechanisms he is dealing with. He has left them behind. One suspects that he used to be part of these inner workings. But they spat him out, so to speak, so now he can only observe things from the outside.

It is possible to stage such events cinematically. Elia Suleiman is in the film. He even has a pronounced visual presence in it. And yet he is also remote from what is going on, on the outside. He doesn't speak. He only listens to what others are saying. He seems to hear what has been said. Whether he wants to hear it is slightly doubtful.

So it is impossible for Elia Suleiman, the silent film character, to call the spectre by its name. The director Elia Suleiman instead takes on this role. Which brings us to the movie as a whole.

The gradual fading of Palestine

The spectre is the gradual fading of Palestine, its disappearance from the firm ground of hard facts. In this respect, the director has created a sequel to his first work from 1996 – "Chronicle of a Disappearance".

At the beginning a priest with a magnificent beard, in an even more magnificent robe, carrying a staff and followed by a solemnly singing congregation, goes to stand in front of the church. It must be Christmas or Easter. The ritual requires that the church door be unlocked from the inside and opened – as if by an invisible hand – so that the community of the faithful can enter. That doesn't happen, however. Those who are supposed to open the door from the inside refuse to play along. The ritual comes to a halt.

From one moment to the next the priest abandons all solemnity and hisses angrily: "Open the door, you ass." A youthful voice can be heard from the inside. The man of God is told to get stuffed. "I won't open the door." The priest curses and takes the side entrance. Then we hear him beat up the insolent youth in the church.

What follows seems to have nothing to do with this opening scene, except that the location of the action is initially the same. It is probably Nazareth. One short episode chases the next. The formal link is the presence of the increasingly marginalised Elia Suleiman.

A hunter tells him how he shot down a circling eagle that was about to swoop down on a snake. The snake thanked him later. His car had a flat tire, which the snake re-inflated. He saw how it took a deep breath and blew it up again. The expression on the face of Elia Suleiman as he listens does not reveal much; at most that he does not think it completely impossible.

Fighting for the taste of home

An attractive young woman is eating a Palestinian poultry dish on a restaurant terrace. Two men drink whisky in sync, keeping her company. She complains to the host that the sauce is too acidic. He explains that the acid comes from white wine. It's supposed to be like that. The mood tenses over the contradiction between the woman's indignation about the discreet but natural presence of alcohol on her plate and the simultaneous carefree way the men pour hard liquor down their throats.

Elia Suleiman observes it as a solitary restaurant guest. He drinks arak, Palestinian anise liquor diluted with ice. One suspects that he, secretly allied with the host, is fighting in support of good taste, the taste of home.

Palestine is a young woman, a pretty woman, of course, with long black hair. Naturally, she strolls through a sunny olive grove, and even though she is almost a fairy, Elia Suleiman can clearly see her through the branches. The fear that she might be kidnapped at any minute by two Israeli soldiers proves to be justified. Blindfolded, she finds herself in the back seat of a car. Elia Suleiman cannot save the prisoner.

He leaves Palestine. The plane bends and shakes as it moves away from the coast. The other passengers do not notice anything.

In the sphere of the absurd

The film operates in the sphere of the absurd, which lives and breathes from comedy. Paris is a good place of exile for this purpose. This is where the film character merges with the director. Elia Suleiman is now supposed to tell the story of Palestine through film. A poster in the film producer's office shows that what the Western movie industry expects from him is something apolitical and exotic. The poster advertises "Noruz", a Persian film that fortunately was never actually made. 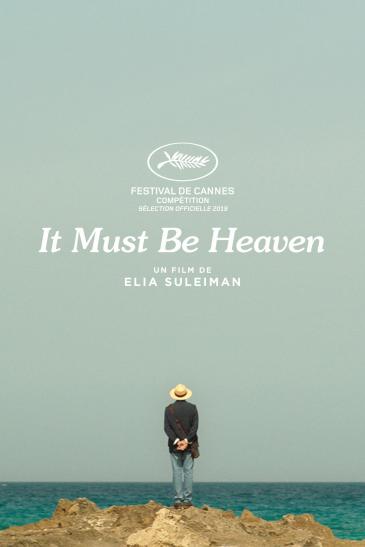 "There can be no doubt, however, that there is no better answer to that "plan" than his cinema of the absurd. Palestine should send a video file to the White House and a copy to the State Department. After all, these addressees only deserve an answer they don't understand," writes Buchen

Suleiman's visual language packs an overwhelming punch. However, the film is not congenial to the viewing habits of the typical crime story fan. If you buy your olives from the supermarket because you like them bland, you should avoid it. The Arabic title translates as "It Must Be Heaven". For the German market the film was named: "The Watering of the Lemon Tree". Fortunately, this abysmal, uninspired romantic translation does not detract from the original.

Elia Suleiman is asked by a slightly drunken-looking critic in New York City, his second place of exile, whether he is "the perfect stranger". As always, he gives no answer. The answer lies in the overall story. Nothing in it can be perfect or complete, not even estrangement. Too much has broken down. "Other cultures drink to forget. We Palestinians drink to remember", a fellow expatriate in New York explains over a glass of arak. Elia Suleiman must know that this statement is not entirely true.

Crying out for salvation

The absurd and the hilarious beget raw pain. This is how the work achieves true greatness. The pain cries out for salvation. Because the necessary repair of what is broken seems so impossible, salvation must be linked to the irrational desire to undo what has happened.

According to the United Nations' partition plan for Palestine, a contemporary expressed the wish in 1947 that the UN would take the position of King Solomon, who had made the proposal to split an infant in half, only to move the conflicting parties to find a better solution.

An angel who carries such ahistorical wishes on her wings flutters through the film. She lands in Central Park and is in danger of being shot down by the New York police. Seen from afar, the angel bears a certain resemblance to the Lady of Palestine. When the police finally bring her to the ground and lift her snow-white wings, the body underneath has disappeared.

The film makes clear that all this longing for salvation makes no sense without genuine Nazarene miracles. Elia, for whom someone has perhaps reserved a chair and a glass at a laid table in Palestine, must return in the end.

Violence is not an option

It seems that violence is not an option in this film. Walking alone in an alley that could be in Nazareth, but just as easily in Hebron, Bethlehem or Tulkarem, Elia Suleiman hears steps behind him. Half a dozen muscular and fashionably coiffed young men, armed with stones and clubs, run past him up the alley. At a fork in the road, the gang splits into three small groups. One can only guess who this threefold incursion is aimed at.

There are no other intifada reminiscences, and a plea for a third would certainly look different. Elia Suleiman's hair has turned grey since his "Chronicle of Disappearance". In the final scene, he takes a seat at the bar of a dance club. The old man quietly observes a group of wildly dancing young women and men.

This is not his world; he is a stranger. He looks upon this scene of unrestrained exuberance without reproach or resentment. We feel that we can instead see a glimmer of hope in his eyes. Could this generation come up with something new and better? The patriarch, it is clear, should in any case not lash out at them for their gaiety.

The White House has given the Palestinian leadership four years to think about Donald Trump and Jared Kushner's "plan of the century". Elia Suleiman could not have known of the "plan", in which no Palestinian was involved, before he wrote his screenplay.

There can be no doubt, however, that there is no better answer to that "plan" than his cinema of the absurd. Palestine should send a video file to the White House and a copy to the State Department. After all, these addressees only deserve an answer they don't understand.

The reviewer works as a television journalist for the ARD political magazine Panorama. He studied Arabic language and literature at the University of Tel Aviv.

As we digest the details of Donald Trump's Vision for Peace, we need to ask ourselves just one question: does this draft guarantee an Israeli and a Palestinian baby born today ... END_OF_DOCUMENT_TOKEN_TO_BE_REPLACED

As expected the Trump administration released its Israeli-Palestinian peace blueprint on Tuesday, a plan that ignores the Palestinians at the expense of lasting peace. Middle East ... END_OF_DOCUMENT_TOKEN_TO_BE_REPLACED

Beyond the latest crisis with Iran, current U.S. Middle East policy is nothing if not chaotic. Many fear that the Trumpian approach could irreparably damage future U.S. ... END_OF_DOCUMENT_TOKEN_TO_BE_REPLACED

At the suggestion of his Arab students, Israeli psychologist Ofer Grosbard created the project "Quranet", which uses texts from the Koran to solve educational problems in schools ... END_OF_DOCUMENT_TOKEN_TO_BE_REPLACED

Contemporary artist Mona Hatoum is one of those figures whose presence in western capitals stimulates much attention and critical writing, while her exhibitions in Arab cities ... END_OF_DOCUMENT_TOKEN_TO_BE_REPLACED

Wall, fences and checkpoints have become a way of life in the West Bank. But now innovative start-ups are using digital means to overcome borders and connect people across the ... END_OF_DOCUMENT_TOKEN_TO_BE_REPLACED
Author:
Stefan Buchen
Date:
Mail:
Send via mail

END_OF_DOCUMENT_TOKEN_TO_BE_REPLACED
Social media
and networks
Subscribe to our
newsletter