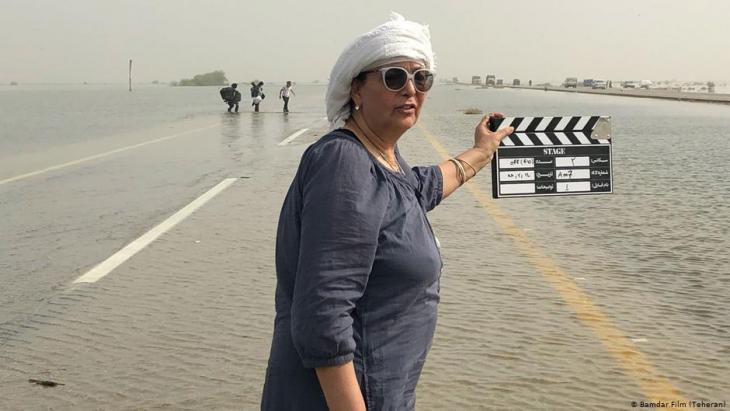 Iranian director Manijeh Hekmat expected the production of her latest movie to go ahead as planned – but then she found herself having to improvise. The resulting film is more than just an homage to Iran's landscapes. By Heike Mund

There's water as far as the eye can see. Muddy waves lazily roll towards the camera. A lone electricity pole remains standing amidst this waterscape. Then a boat approaches. When its three passengers get out, it becomes clear that they are in fact standing on a completely flooded highway.

A minibus is seen carefully ploughing through the floods, eventually coming to a complete stop. The three passengers get in as a news reader on the radio gives a flood warning for the Iranian province of Khuzestan. The roads have already been closed there, and villages evacuated.

The camera then pans through the windshield to reveal what is going on outside: people in packed cars, bumper to bumper trucks, shepherds trying to drive a panicked herd of sheep through the crowded convoy of vehicles.

This is both a graphic insight into the state of emergency in south-western Iran last year and an early scene in Iranian director Manijeh Hekmat's latest work, Bandar Band.

Hekmat, whose films are regularly screened at the Berlinale Film Festival, had planned to produce a road movie of sorts focusing on three young musicians from the countryside setting off for a competition in the capital. It was intended to be a road movie full of hope and big dreams of an international career, a 400-kilometre (250 miles) story of the drive to Tehran that is adventurous and fun. That was the plan, at least. 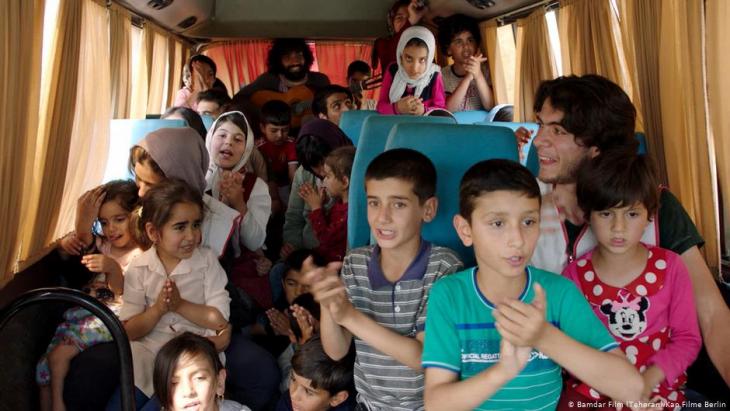 When fact and fiction collide: during production, the film crew encountered many people fleeing the floods. Between mid March and the end of April 2019, 26 of Iran's 31 provinces were hit by flash-flooding. Tens of thousands were displaced, villages and towns evacuated and at least 70 killed

But severe storms in Iran thwarted the director's filming schedule. About two thirds of the original plot were still salvageable, the film's co-producer Yasmin Khalifa told DW. The remaining parts then had to be improvised again and again along the way.

At one point in the film, the cast are told that they have to take aid supplies along or they wouldn't be allowed to continue their journey.

"That actually happened," Khalifa explained, adding that it was one of the many things that were unplanned, resulting in a script that was heavily inspired by reality.

In the film, one of the protagonists, Amir, suggests: "Let's just go straight to Tehran." It turns out to be a bit of wishful thinking: the band's pregnant singer, Mahla, calls the organisers of the festival to confirm what time the performance starts, and to inform them that the band is on its way. But the road is totally flooded: all they see for miles is water – which, however, doesn't dampen their spirits.

Mahla and guitarist Navid meanwhile use their time to watch online music videos of competing bands, where they see only women singing at the microphone. In Iran, this is anything but a matter of course, says co-producer Yasmin Khalifa.

"Mahla is a singer and the two musicians are there to accompany her. The reason behind this is that women in Iran are not allowed to sing solo in public. But this is a secret competition, so to speak, where the three are heading. Where the female voices can present themselves on stage." 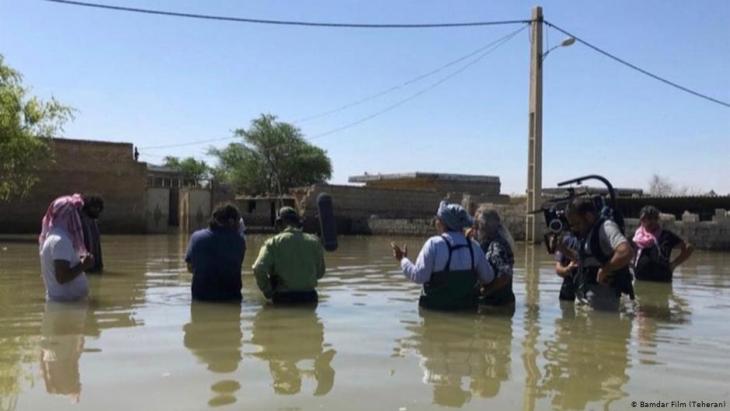 Flexibility required: Iranian director Manijeh Hekmat had planned to make a kind of road movie focusing on three young musicians setting off for a competition in Tehran, but heavy rains forced her to change plans, improvising and adapting along the way: according to the film's co-producer Yasmin Khalifa, about two thirds of the original plot were still salvageable

Outside the windows of the minibus, the landscapes seem to float past the passengers like paintings in watercolour. Endless expanses and narrow rows of trees are reflected in the watery plains like a surreal green belt, with the horizon a pale blue blur.

Mahla's gaze follows these passing landscapes, as she caresses her arched pregnant belly tenderly and introspectively.

A taste of music from Iran

Then a police cordon in the middle of the road stops the vehicle. Everyone gets agitated. Amir, the driver of the minibus and father-to-be, shouts that they "urgently have to go to Tehran, and we have a pregnant woman in the car."

But the police officers look unimpressed. There seems to be no thoroughfare; all roads are closed. "I know the way," says Amir, which eventually seems to help.

The minibus continues to plough through the water – and towards an uncertain future. The three protagonists pass the time singing together, lending their voice to everything from Iranian folk songs to pop tunes.

"In the film, we listen to music the whole way through, and also get a feeling for the kind of music that the Iranian youth listen to now," co-producer Khalifa explains. 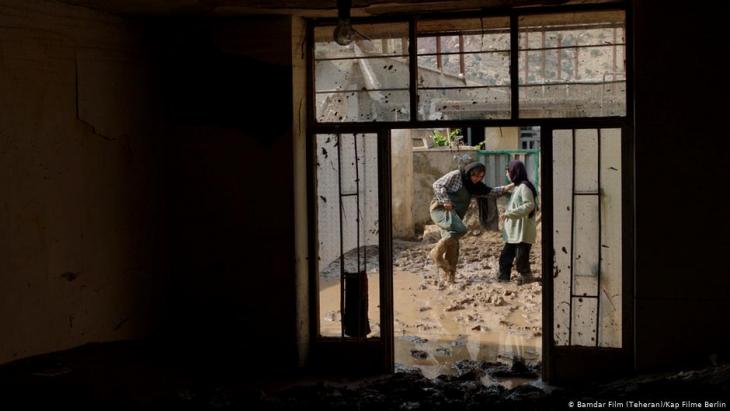 Hope and resilience amid adversity: according to Heike Mund, one of the film's key messages is that Iran's youth won't be defeated, and – much like the movie's protagonists – are constantly seeking new paths

At last, they emerge from a rough and bumpy sand road and reach a stretch of asphalt road. Things look better, at least for a while. But then the minibus comes to a sudden standstill in front of a gaping abyss: The road in front of the band has been washed away by the rain and has become impassable.

The three young musicians are seen standing helpless before the deep cracks in the pavement of the road. There is no way they can pass: they have to turn around.

"We will be late," Mahla tells the concert organiser in Tehran, as an entire village covered in water come into view. But it's not just any village – it's the home of Navid, the guitarist. The trio had planned a stopover to pick up his concert guitar.

As they wade through the hip-deep water towards his house and enter, the instrument drifts toward him. And this is when the full severity of the situation truly hits him.

The elusive dream of freedom

Navid is completely devastated. With his eyes closed, he lets the wind blow through hair. In short flashbacks, he is seen standing on stage singing. But this world has been destroyed.

Yasmin Khalifa explains why the inability to perform with his beloved guitar is so earth-shattering: "If they win this music competition, they'll go on from Tehran to Amsterdam, London and Berlin. They could finally travel along the Rhine in Germany, they think. But the reality in Iran is quite different: they are not allowed to go; they are locked up in this country. And where is the only place they truly are free? In their heads, in their music, in their dreams."

Director Manijeh Hekmat is a highly respected filmmaker in Iran, according to co-producer Yasmin Khalifa. She has managed to build a reputation at festivals around the world but also faces ubiquitous censorship in Iran.

Though that issue is only hinted at in the film, political messages resonate gently between the lines of dialogues. The imagery of the film is charged with metaphors while also serving as a visual homage to the beautiful landscapes of Iran.

A message of hope

The film benefits from a strong sense of authenticity due to all the incidental documentary-style material, which was unexpectedly created by the unplanned events that occurred during the trip.

The fact that that the three protagonists are actually actors who were cast to fit their roles is forgotten in the dramaturgy of the story, which is enhanced by the arduous circumstances in which the film had to be completed.

Towards the end, a thunderstorm casts its shadow over a deserted rest area; a dog is seen playing in a puddle. Water, water everywhere. But throughout it all, hope remains.

This is also one of the film's key messages: Iran's youth won't be defeated, and – much like the movie's protagonists – are constantly seeking new paths.

"Bandar Band" is a joint production of the Tehran-based production company Bamdad Film and the Berlin-based studio kapFilme. Its world premiere took place on 19 September at the TIFF Film Festival in Toronto. Later in September, it will also be shown at the Filmfestival Zurich.

Director Manijeh Hekmat (born in Arak, Iran, in 1962) has been working in the Iranian film industry since 1982, producing her first feature film "Women's Prison" in 2002. This film was also shown at the Berlinale Film Festival. Travel restrictions caused by the coronavirus outbreak will prevent her from attending the premiere of her current film.

The Human Rights Film Festival Berlin has been held for the third time in 2020 under the patronage of Nadia Murad. In just a short time, this festival, which was initiated by the ... END_OF_DOCUMENT_TOKEN_TO_BE_REPLACED

The small East African nation of Djibouti has so far evaded musical discovery by the West. Now, however, the country's official national band, Groupe RTD, is picking up ... END_OF_DOCUMENT_TOKEN_TO_BE_REPLACED

Germany is home to 21 million people with a migrant background. Hospices and providers of palliative care are adapting their practices to make them more inclusive. By Christoph ... END_OF_DOCUMENT_TOKEN_TO_BE_REPLACED

Iran's capital city, Tehran, is firmly in the grip of the coronavirus pandemic. The cultural scene is suffering because of it too. But in the face of adversity and the often ... END_OF_DOCUMENT_TOKEN_TO_BE_REPLACED
Author:
Heike Mund
Date:
Mail:
Send via mail

END_OF_DOCUMENT_TOKEN_TO_BE_REPLACED
Social media
and networks
Subscribe to our
newsletter