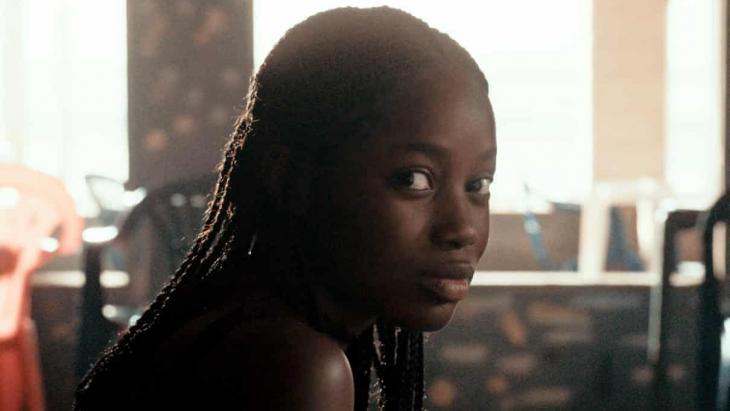 The outstanding debut feature of French-Senegalese filmmaker Mati Diop is an eclectic cinematic composite of genres and a startling social drama on contemporary transatlantic migration, in which a tragic scenario spiked with supernatural elements proves a catalyst for transformation and reversal. By Adela Lovric

A gigantic, futuristic, shamelessly luxurious Muejiza Tower is being erected atop a barren area near Dakar. It represents the real-life wealth enclave set to emerge by 2035 – the obtrusive hubris of the wealthy few Senegalese driving the inequality-ridden country towards econocide. The dichotomy is beautifully shown in the opening scene. Dramatic silhouettes and glaring surfaces fade behind a curtain of dust ascending from unpaved roads, while the constant humming of machinery melds with the mooing of cows.

A revolt flares among a group of workers who haven’t been paid for three months-worth of labour at the construction site. Brimming with despair and dreading the inevitable, Souleiman (Ibrahima Traore) fixes his gaze on the sea. He and his fellow workers had set up an escape plan to Europe. His girlfriend Ada (Mame Bineta Sane) knows nothing about it and their last meeting leaves much unsaid and undone.

That night, Ada and her friends gather at a beach bar to meet their lovers, only to find out that they have sailed out in a pirogue. No-one got the chance to say goodbye or stop their loved ones from embarking on a path that rarely ends well.

Caught in a trap

Shortly after, a story surfaces – of Souleiman’s lifeless body caught in a fishing net. The monstrous sea seems to have swallowed and regurgitated him whole. Heartbroken Ada copes with grief, while her family arranges her wedding with Omar (Babacar Sylla), an emotionally detached businessman flashing his wealth earned abroad. 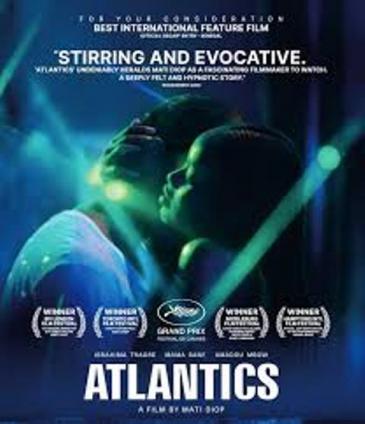 Permanent backdrop and mysterious entity: the Atlantic ocean is endlessly melancholic; a mass graveyard that bears memories of cruel deaths of the transatlantic slave trade and of young men taking the fatal leap in a desperate attempt to reach the European coast. Despite all warnings of known dangers, its lure remains riveting and inescapable

Her mother doesn’t mind her teenage daughter rejecting the marriage; she rationalises it as a solution to Ada’s financially uncertain future. The overlap of patriarchy and capitalism becomes tangible to the young woman enmeshed in the oppressive hegemony of both.

On their wedding day, the film takes a decided turn towards the supernatural. A mysterious fire breaks out in Omar’s bedroom. The ominous event triggers tension between Ada’s conservative and sexually liberated friends. Prompted by the police inspector’s suspicion of Ada and Souleiman committing the arson, Omar’s family requests a bizarre virginity test from Ada.

In the eyes of African men setting out on a migratory journey, Europe is a fata morgana on the horizon that disappears as soon as approached. In "Atlantics", rather than existing as living ghosts in Europe, the destiny of men is to return home as "djinn" seeking justice at all costs.

Ada soon finds out that Souleiman has returned as one of the djinn, invoked by her weeping for romantic closure. Diop takes her inspiration for this supernatural narrative twist from pre-Islamic Arabian and Islamic mythology. The djinn originates there as a neither good nor bad spirit born of fire and air, able to shape-shift and possess humans.

Souleiman as a djinn chooses to possess the body of the police inspector Issa (Amadou Mbow). He uses it for the final reunion with Ada, which culminates in one of the most tear-jerking romantic scenes on-screen, pushed to a cathartic high by Fatima Al-Qadiri’s entrancing soundtrack.

Other men have also returned as djinns, possessing the bodies of their lovers at night to seek retribution from the greedy tycoon. Bodily boundaries are transgressed without consent, paralleling the way in which women are policed, governed, and ultimately violated by dominant religious and patriarchal codes. Yet in being possessed – as opposed to being a possession – they are finally empowered as arbiters of justice.

The way the film addresses migration goes beyond transatlantic escape. Its cinematic treatment implies migration between body and spirit, along the gender continuum and power axis, as well as migration to different forms of the afterlife.

Set in Dakar, the film shows multiple sides of the capital of Senegal, which is where Diop's father, the musician Wasis Diop, emigrated to France from in the 1970s. It is the director's place of what-ifs, of romanticised longings for another version of her own coming-of-age.

She shows us its stark contrasts: beauty against a backdrop of rubble, exploited youth and a corrupt system, emancipation versus religious conservatism, female sexuality challenging the patriarchy, a lingering past and the unattainable future. A brutal ending of interlinked stories provides an opportunity for power shifts along these faultlines, while the vibrancy of the coastal town on the Cape Verde peninsula slowly fades under the brooding force of the rising ocean.

The ocean exists in the film as a permanent backdrop and a mysterious entity; a forceful counterpart to the threatening hyper-masculine verticality of Muejiza Tower. It is endlessly melancholic; a mass graveyard that bears memories of cruel deaths of the transatlantic slave trade and of young men taking the fatal leap in a desperate attempt to reach the European coast. Everything breaks and disappears under its colossal power. Despite all warnings of known dangers, its lure remains riveting and inescapable.

A new wave of representational politics

Those who can relate to the talented Mame Bineta Sane and Mati Diop, both of whom are intimately ingrained in Ada’s character, will feel a rush at Ada’s final words while she piercingly looks at the camera: "Ada, to whom the future belongs". Indeed, the future belongs to her. It belongs to a de-colonised female gaze.

With "Atlantics", Mati Diop entered the 2019 Oscar competition and the Cannes Film Festival, becoming the first Black female director to win the Grand Prix. Only several months after spellbinding the major festivals’ gatekeepers, the film was featured on the streaming platform Netflix. The intense exposure and the celebration of Diop’s singular vision make it possible to imagine a new wave stirring the stale representational patterns of mainstream waters.

The small East African nation of Djibouti has so far evaded musical discovery by the West. Now, however, the country's official national band, Groupe RTD, is picking up ... END_OF_DOCUMENT_TOKEN_TO_BE_REPLACED

Morocco officially declared itself a country of immigration in 2013, responding to the growing number of immigrants arriving from sub-Saharan Africa. Since then, tens of thousands ... END_OF_DOCUMENT_TOKEN_TO_BE_REPLACED 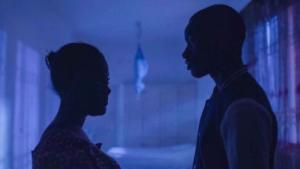 A fight for the soul of Islam

Violent Islamist fundamentalism has not yet come to Senegal, but it could – just as it has in Mali, Burkina Faso and Nigeria. A fascinating new feature film from Senegal shows how ... END_OF_DOCUMENT_TOKEN_TO_BE_REPLACED

This evening, Algeria will play Senegal in Cairo International Stadium in the final of the 2019 Africa Cup of Nations. Joseph Hammond takes a look at how the football championship ... END_OF_DOCUMENT_TOKEN_TO_BE_REPLACED 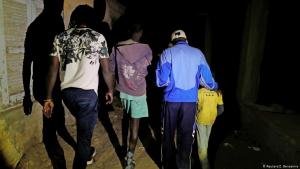 Families across Senegal have long enrolled their children in schools called "daaras" to learn Islamic scripture and build character. The tradition of begging for food to instill ... END_OF_DOCUMENT_TOKEN_TO_BE_REPLACED

Diali Cissokho left his native Senegal for North Carolina years ago. Raised as a griot, one of the traditional musical story tellers and historians of West Africa, he wanted to ... END_OF_DOCUMENT_TOKEN_TO_BE_REPLACED
Author:
Adela Lovric
Date:
Mail:
Send via mail

END_OF_DOCUMENT_TOKEN_TO_BE_REPLACED
Social media
and networks
Subscribe to our
newsletter