The death of Michael Jackson is the catalyst that leads a young imam in Cairo to question the meaning of his life in the Egyptian film "Sheikh Jackson". Schayan Riaz watched the film

Crying has an important role to play in many religions – and Islam is no exception. When an imam should shed tears during prayer, for example, it is seen as the most sincere expression of his faith. But what happens when a religious scholar is no longer able to cry? This intriguing question lies at the heart of Egyptian film "Sheikh Jackson". It is safe to assume, given this context, that the thoughts expressed on crying in the Prophetic tradition: "the eyes that cry for fear of Allah shall never look upon the fires of Hell" are no incidental inclusion in the film. It is an idea, however, that director and screenplay writer Amr Salama turns on its head from the very beginning.

Khaled (Ahmad Alfishawy) is a young imam from Cairo, who has not always been religious. As a teenager in Alexandria, he idolised pop star Michael Jackson, copying the hairstyle, wearing the same clothes and learning the song lyrics and dance steps of his hero by heart. When Khaled's strict father gives him money to spend on private tuition, he spends it on the King of Pop's latest album instead. And no cheap pirated copy either, only the imported, expensive original will do.

In his present life, everything is different. When he discovers his rebellious daughter secretly watching Beyonce videos, Khaled rips the Internet cable from its socket. To his wife (Amina Khalil) he confides: "I love you because I know that you love Allah more than you love me." He wears a special bracelet with two buttons that allow him to keep a tally of all his good and bad deeds. Positive things are marked by pressing the green button, for everything else it's the red.

From his own point of view, Khaled's pious and peaceful life could not be better. Until, that is, Michael Jackson dies. When he hears the news, Khaled's world falls apart. Plunged into a profound identity crisis, he is forced to confront his complex past. His former love of life gives way to impassive indifference – no longer able to cry, he even seeks out the services of a therapist. While leading prayers, he forgets the correct order of some verses and gradually the congregation begins to turn away from him.

He is affected by hallucinations and in one brilliant scene, we find Michael Jackson himself (played by Carlo Riley) leading the prayers. The scene culminates in the worshippers breaking into a zombie dance (a la "Thriller") that completely derails Khaled's prayer recital. Such sequences draw a fascinating parallel between religiosity and fandom, highlighting the parallels that reveal them as two sides of the same coin. What are big concerts, after all, if not scenes of mass adoration?

The film's screenplay is packed with other examples of symbolism. Khaled, for instance, always sleeps in the coffin-like enclosed darkness below his bed, the eternal imminence of death requiring constant preparation. Plagued by bad dreams into sudden wakefulness, he is continually banging his head on the underside of the bed. Here, in the physical constrictions of the confined space, we are presented with what is in effect a metaphor for Khaled's own essential ambivalence. Salama appears to be suggesting here that all his fears and worries are self-inflicted. He is his own monster under the bed. It is not the devil. And certainly not Michael Jackson.

What a man is

In a series of flashbacks, we see the adolescent Khaled (Ahmed Malek) rebelling against his authoritarian father. Though a sensitive young man, he does not allow others to tell him what to do. For the father (a performance of impressive conviction from Maged El Kedwany) an icon like Michael Jackson embodies everything he does not want to stand for. "He is neither man nor woman. Something in between." 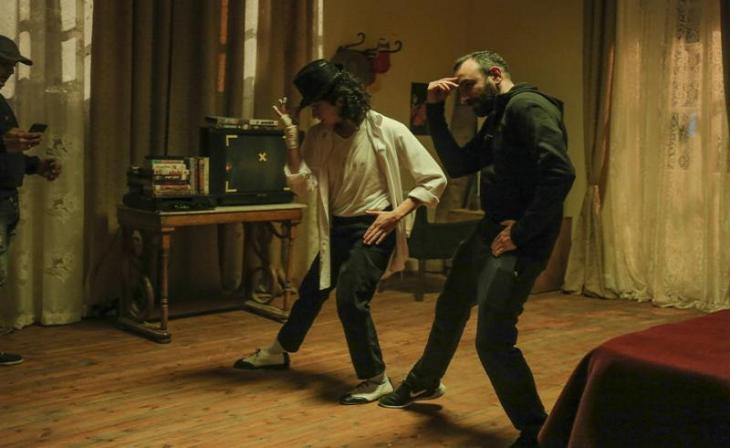 "King of Pop": "Sheikh Jackson" is a fascinating character study, reminding us that even religious scholars are flesh-and-blood; normal people living out their own lives and experiences.

Here too we find parallels between Khaled's natural evolution into a super-fan and the life of an artist – someone who does not pretend, does not hide and on stage, day in and day out, all over the world, always gives completely of himself. It's hardly surprising that as an adult Khaled is unable to shake himself free of this bond.

"Sheikh Jackson" is a fascinating character study. Importantly it reminds us that even religious scholars are flesh-and-blood like the rest of us; normal people living out their own lives and experiences. Salama is never judgmental, presenting his characters with an unadorned, warts-and-all authenticity. Khaled is a three-dimensional, rounded personality, who would not have been written with so much depth in other films. This freshness of insight lends conviction to the story and the unobtrusive observation allows the film to unfold its extraordinary and unpretentious power.

The only criticism of an otherwise highly accomplished film is the lack of authentic music. Of course, "Sheikh Jackson" is not intended to be a biopic of the pop star. It is much more about the people who worship him. Nevertheless, the lack of the real Jackson songs, the true catalyst for everything that follows, is a weakness.

Due to the lack of licensing rights to the original music, Salama was forced to have his characters silently mouth popular songs such as "Beat It". At one point, Khaled talks about the content of "Stranger in Moscow" and describes the accompanying music video without the viewer being able to either see or hear it. Such moments in the film are undeniably awkward. Yet when viewed in its entirety, such small imperfections can be excused. In other aspects, "Sheikh Jackson" hits all the right notes.

In Doha, Arabs from Morocco, Tunisia, Egypt and Algeria are gathering to celebrate the first ever FIFA World Cup to be held on Arab soil. The criticism from Europe? Over the top, ... END_OF_DOCUMENT_TOKEN_TO_BE_REPLACED

November 2022 sees the Arab world firmly in the spotlight with the COP27 in Egypt and the FIFA World Cup in Qatar. Public trust in MENA governments is weak, thanks to their ... END_OF_DOCUMENT_TOKEN_TO_BE_REPLACED

Palme d’Or winner "Boy from Heaven" is a classic crossover film in which cultural elements are mixed together in haphazard and random fashion. Shady Lewis Botros bemoans the ... END_OF_DOCUMENT_TOKEN_TO_BE_REPLACED

COP27 in Sharm el-Sheikh is turning into a PR disaster for Egypt’s military regime. Instead of praise for the host, the news is full of solidarity for imprisoned activist Alaa ... END_OF_DOCUMENT_TOKEN_TO_BE_REPLACED

END_OF_DOCUMENT_TOKEN_TO_BE_REPLACED
Social media
and networks
Subscribe to our
newsletter