A comedy about one of the world's longest-running violent conflicts? Can that work? It certainly can! "The 90 Minute War" uses a soccer match to highlight the issues of the Israeli–Palestinian conflict, taking a humorous and sarcastic look at what is actually a deadly serious and ideologically charged debate. By Eva-Maria Verfürth

"Israel's prime minister and the president of the Palestinian Authority have decided there is only one logical way to resolve the longest-running conflict in modern history: a soccer match." A serious-faced television correspondent is addressing the camera against a panoramic backdrop of Jerusalem with the golden cupola of the Dome of the Rock. His introduction perfectly sums up the story of "The 90 Minute War".

This comedy by Israeli director Eyal Halfon feels like a documentary, but the action is obviously fictitious: after half a century of wars and bloodshed, political negotiations and peace accords have failed to resolve the Israeli–Palestinian conflict, so a soccer match is arranged to settle the matter once and for all. The winners can stay, the losers must find another homeland.

Agreeing on the football match is only the first step, of course. The film follows the two teams and their managers as they prepare for the momentous encounter. Nothing is easy, and the public pressure is immense. Where is a neutral venue for the match? Who can serve as truly impartial referee? And where will the losers go?

Right from the outset, there are heated negotiations, replete with allegations, recriminations and recurrent threats to call off the match.  And even when the main issues have been settled, new obstacles keep popping up. 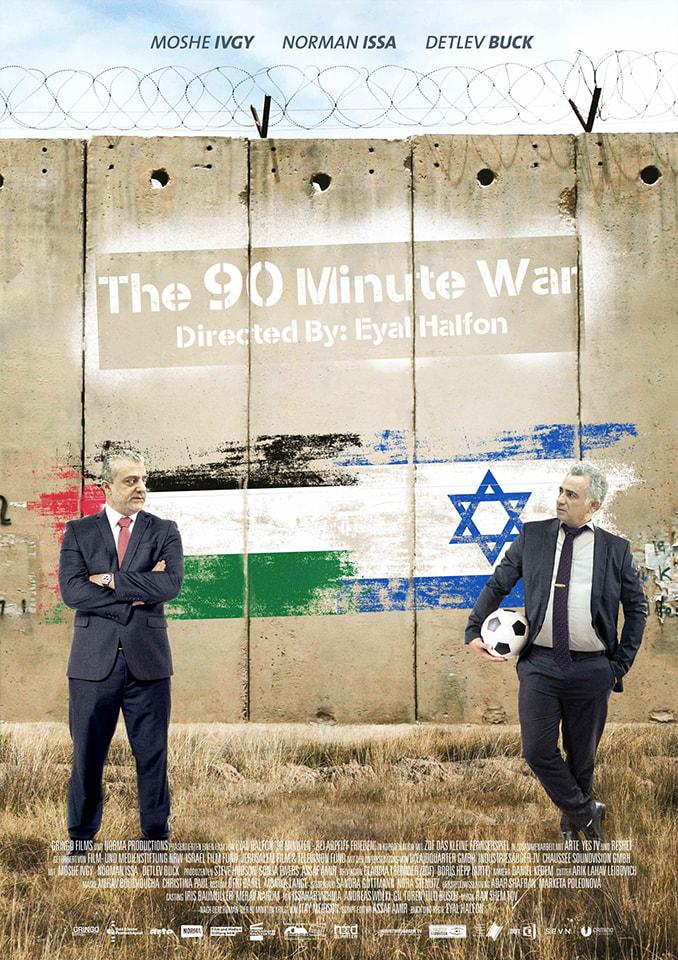 The mockumentary entitled "The 90 Minute War" plays "with stereotypes, takes a scathing and politically incorrect look at all parties involved and, in doing so, accurately highlights the absurdities of the conflict," writes Eva-Maria Verfürth

The film plays with stereotypes, takes a scathing and politically incorrect look at all parties involved and, in doing so, accurately highlights the absurdities of the conflict. While the Israelis arrange for a star coach to be flown in – from Germany of all places – the Palestinian team bus is regularly held up at checkpoints when players try to travel between the West Bank and Gaza for squad training.

An Israeli soccer player with Palestinian roots is plunged into a crisis when he has to choose which team to play for. Thus, the fundamental question of who should be allowed to play for which team arises. When it is finally decided that players need to have spent at least two weeks in the respective country in the two years prior to the match, the Israelis immediately close the borders – while the Palestinians smuggle an international soccer star into Gaza through an underground supply tunnel.

No one is spared

The world of sport is not spared either: the negotiations are brokered by the president of "Ifa" – the thinly veiled counterpart of the real international soccer association Fifa. Ifa has a keen interest in the match taking place – especially since it will be a lucrative major sporting event.

But what about the problems presented by such a highly political match? "There are always problems. But if anyone knows how to solve problems, it's us." The Ifa president smiles into the cameras, adding that his association is also tackling problems in South Africa, Brazil and Qatar.

The main characters of the film, the two team managers, are played by Moshe Ivgy and Norman Issa. Both actors who are well-known in Israel are active peacebuilders in private life. Moshe Ivgy is an Israeli born in Casablanca, Norman Issa a Palestinian with a Jewish wife.

In the film, the two managers are driven to despair by public pressure and their sense of responsibility. They drive each other crazy in interminable negotiations. But in the end, they are the ones who take a step towards each other – on neutral ground and without international pressure.

What it means for the fate of the two nations, however, and who actually emerges victorious are questions the film leaves unanswered. But there may be a clue in the title: a "90 Minute War" is surely less likely to end in peace than in a renewed displacement.

In an act of subversive diplomacy, Israeli singer and actress Liraz Charhi has recorded her latest album in secret collaboration with Iranian artists. By Carl Holm END_OF_DOCUMENT_TOKEN_TO_BE_REPLACED

A German IT company has started an academy to train Palestinians in software development. Despite the pandemic's challenges, it has managed to run its first boot camp in Ramallah ... END_OF_DOCUMENT_TOKEN_TO_BE_REPLACED

This summer it was reported that Israel had abandoned its plan to annex parts of the occupied West Bank. Now, however, Israel is driving forward its settlement programme in the ... END_OF_DOCUMENT_TOKEN_TO_BE_REPLACED

Conceived by Israeli journalist and rabbi Elhanan Miller, "People of the Book" is a YouTube project designed to provide information on Judaism in Arabic. Disarming prejudice with ... END_OF_DOCUMENT_TOKEN_TO_BE_REPLACED

Comments for this article: A level playing field

Notice the language: "Israeli–Palestinian conflict". Foucault might be of a help here.

END_OF_DOCUMENT_TOKEN_TO_BE_REPLACED
Social media
and networks
Subscribe to our
newsletter