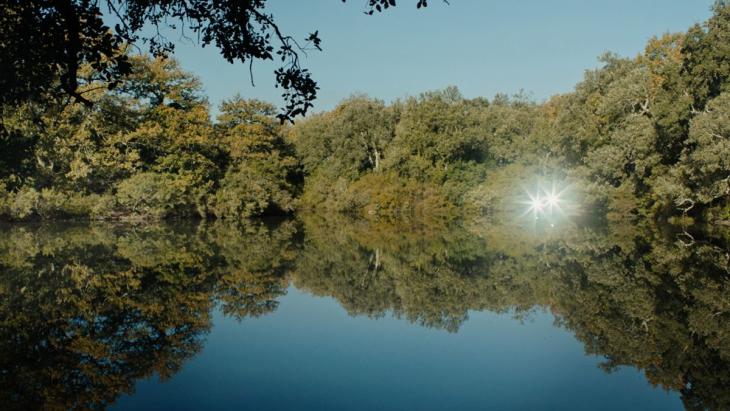 "Tlamess", a visually striking experimental feature by Tunisian director Ala Eddine Slim, brings two drop-outs together in a weird, wild cohabitation in the woods: a desperate army deserter and a pregnant woman who walked away from her seemingly perfect life. By Adela Lovric

In the midst of a desolate landscape, a Tunisian army unit is on the hunt for terrorists. The atmosphere is sombre, days devoid of conversation and meaning. One soldier confides in another: "I’m fed up! Terrorism. Bullshit! There’s nothing, nothing at all. We starve people and kill them for no reason." The thought starts to spread like a virus that pushes the protagonists to escape, in one way or another, from their bleak realities.

When the young soldier S (Abdullah Miniawy) is assigned home leave to go to his mother's funeral, he seizes the opportunity to desert the army. Shortly after, the authorities catch on to his plan and hunt him down until he is captured. Yet, powered by absolute refusal of the situation, S runs away again – fully naked, as if shedding the last remainder of his identity, of belonging to society. He stumbles through chaotic wastelands into a dark forest like a wounded animal, giving the impression of spiralling madness (as defined by dubious societal standards).

With long, dark, visually impressive drone shots over a night-time cityscape and through the woods, one story fades out suggesting a threatening, apocalyptic ending, and its opposite follows. In stark contrast to the descending darkness, the second part of the film opens with pastel-hued brightness. F (Souhir Ben Amara), a young mother-to-be, is overseeing the move into her new home. Her reality – a rich husband, a luxurious house in the countryside, a child on the way – is the supposed dream of so many women. Despite her apparent blessings, F is unable to conceal her unhappiness with her ultimately hollow consumer lifestyle behind the aspirational facade.

Silent revolution in a mystical forest

One day, F wanders aimlessly into the woods. It’s the same place where S once disappeared, and the two stories abruptly collide. F becomes a captive of S, the latter now transformed into an unkempt bearded hermit living in a cave-like shelter. After some initial resistance by F, they enter into a wild cohabitation in the damp squalor, sustaining themselves with the most primitive means while waiting for the baby to be born.

S and F gradually shed their forced societal roles and transition into a new way of existence. A bizarre deconstruction of gender roles allows them liberation from the pressures of traditionally prescribed masculinity and femininity. Language as another signifier of identity and an instrument of oppression becomes obsolete and the two start to communicate telepathically, via eye-gazing. Their lives are initially very different, but their depraved essence is mirrored. It is why they understand each other so well, even without words, and why they make this desperate leap together.

By making his protagonists prioritise freedom, Slim strongly rejects the violent socio-political reality of today. While telling a story of breaking free from authoritarian constructs – the military and the patriarchal family – he also attempts to break free from the usual parameters of cinematic building blocks. With an idiosyncratic vision, the director imagines a fantastical possibility; a rebirth of civilisation. A spin on the biblical story of creation, of a new kind of Adam and Eve in the lush Gardens of Eden, or some place similar enough.

Throughout the film, Slim uses simple allegorical pointers such as a serpent and an apple, a dog being killed and a dog sheltering her new-born puppies, to zoom in on the bottom line. One of the oldest mythological symbols, the serpent, represents re/birth, transformation, and healing – the processes that both main characters thoroughly experience. The serpent is seen as a unifier of opposite forces, which is the dynamic on which the structure of the film pivots. It also symbolises the umbilical cord that joins all humans with Mother Earth. Yet, the feeling that lingers through the film is far more dystopian and complex than the idea of a mere return to nature.

Thanks to the music, which seemingly assumes the role of the narrator, the absence of dialogue is barely felt in the film. The gloomily droning texture of the soundtrack by Oiseaux-Tempete amplifies dystopian undertones and builds up a range of emotions and expectations. Through their music releases, the French band often conceptualises the music around a critique of capitalism and attempts to voice the violence and confusion that fuels discontent and protests. Slim’s film comes as an extension of their practice, as much as it works the other way around.

Another brilliant director’s choice is the casting of Abdullah Miniawy as the character S. Miniawy is a celebrated 25-year-old poet and musician who gave the voice to revolutionaries and freedom fighters of Egypt and represents its fiery youth. Besides outsourcing collaborators whose lives and artistic engagement correspond with the narrative and the ethos of the film, the director also used his own army experience to shape this rebellious cinematic journey.

Slim is a filmmaker who is able to offer a fresh, unique, truly exciting cinematic perspective on contemporary Tunisia. In his poignant debut film, "The Last of Us" (2016), a refugee finds himself alone in Tunisia and heads out to sea to reach Europe. With "Tlamess”, the director manages to capture the anxiety of our age again and create unusual beauty in roughness, a scrap of sense in chaos. It’s a film that aptly expresses the zeitgeist at the turn of the decade; an appeal against the pressures of traditional structures whose destructiveness and nonsense is reaching a tipping point.

M’hamed Oualdi presents the story of a manumitted-slave-turned-dignitary in the Ottoman province of Tunis and the posthumous conflicts over his estate as a case study to ... END_OF_DOCUMENT_TOKEN_TO_BE_REPLACED

The coronavirus lockdown has hit performing artists especially hard, with the cancellation of live concerts denying them their major source of income and promotional opportunities ... END_OF_DOCUMENT_TOKEN_TO_BE_REPLACED

In the Arab world, freedom of opinion collides with a societal juggernaut that silences imagination with remarkable efficiency. Egyptian author and novelist Khaled al-Khamissi ... END_OF_DOCUMENT_TOKEN_TO_BE_REPLACED

The rise of liberation movements in the Arab World during the 20th century brought with them an array of complimentary works from the creative sector. Sultan Sooud Al Qassemi ... END_OF_DOCUMENT_TOKEN_TO_BE_REPLACED

Since independence in 1956, Tunisia has gone to great lengths to mobilise its water resources. Its drinking-water supply rate and the number of households connected to sanitation ... END_OF_DOCUMENT_TOKEN_TO_BE_REPLACED

With the arrival of thousands of Tunisian refugees in Italy, the Italian government is putting increased pressure on Tunisia and wants to extend its deportation deal with the ... END_OF_DOCUMENT_TOKEN_TO_BE_REPLACED
Author:
Adela Lovric
Date:
Mail:
Send via mail

END_OF_DOCUMENT_TOKEN_TO_BE_REPLACED
Social media
and networks
Subscribe to our
newsletter