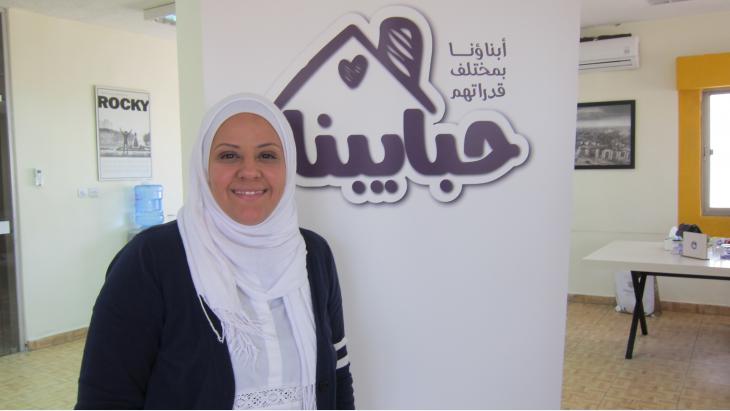 Reem Al Farangi from Gaza, mother to two children with autism, has created the first Arabic-language website for the parents of disabled children. "Habaybna" provides important information about early recognition, therapies and self-help – and connects parents from across the region. Claudia Mende reports from Amman

Looking at her today, it’s difficult to imagine that things were once very different for Reem Al Farangi. That she was once at rock bottom. Beaming and full of optimism, the 38-year-old Palestinian invites me into her office in downtown Amman and introduces her project.

It was personal concern that led her to develop the "Habaybna" website (literally: "our loved ones") – the first Arabic digital platform for the parents of children with disabilities. Habaybna went online in 2017 and has been providing important information about early recognition and therapies, financial support, self-help, awareness-raising, and everyday life with disabled children ever since.

From attention deficit disorder to Down’s syndrome, learning difficulties to cerebral palsy, the website covers a broad spectrum of disabilities. Around a thousand short videos offer valuable suggestions in easily understood language. They have so far attracted 400,000 clicks. There is a great need for reliable information in a region where therapeutic treatment for people with disabilities is not yet provided across the board.

Reem pours tea and tells me how the project came about. Habaybna is the result of the painful things that she and her husband Mohammed, 40, had to go through. They are both from Gaza, that narrow strip of land between Israel, Egypt and the Mediterranean, which has been repeatedly afflicted by military conflicts between Israel and Hamas.

As bombs rained down

It was in Gaza that, following a long odyssey, they finally received confirmation that their two sons Amro and Aboud – who were then aged four and six – were suffering from Autistic Spectrum Disorder.

For a long time, the couple had thought that the war was to blame for their children’s difficulties with speech and social interaction. At the end of 2008 and the start of 2009, Israeli bombs started falling in Gaza once again, in response to rocket attacks by the Islamist Hamas.

The Al Farangi family stuck it out and stayed in their flat while the bombs fell all around them. Afterwards, it was as if the children had been turned to stone, Reem recalls. The younger of the two boys stopped speaking altogether. And when the doctor finally gave them the diagnosis in 2011, after a lot of back-and-forth, "I was shocked and completely at a loss."

There was no therapy available in Gaza. "I was in the process of building up a photography studio for women." It hit her like a punch in the gut, she says. "At that point, I thought my life was over and my children would never get a chance to develop." The world looked like a dark tunnel, from which she would never emerge. And on top of that, the people around her reacted dismissively towards her children.

After the diagnosis, the pre-school refused to keep taking the pair of them. Neighbours averted their eyes and stopped their children from playing with Aboud and Amro. "There is still some shame and stigma around disabled people here, even today," Reem says. Many families fall apart under the strain.

It used to be the fathers who would leave their families, but lately mothers have been leaving, too. There are also still cases of people with disabilities being locked away or put in restraints. In desperation, Reem and her husband Mohammed searched the Internet for information, but found nothing tailored to their situation in the Middle East.

In 2011, the family managed to move to Amman, the capital of Jordan, to get treatment for the children. As a Palestinian, she got a residence permit. Healthcare is comparatively good in Jordan, and a lot of people go there from other Arab countries for medical treatment. "I felt like Alice in Wonderland."

Education is the key to the future. Muzoon Almellehan has known this since she was 14 years old. But she lives in a Jordanian refugee camp. And since then she has been fighting ... END_OF_DOCUMENT_TOKEN_TO_BE_REPLACED

In Jordan, members of civil society have set up the first shelter for women who are under threat of death from their own families. For one year now, such women have been able to ... END_OF_DOCUMENT_TOKEN_TO_BE_REPLACED

Basma, Jad and Ma'zooza are about to join the Sesame Street family. The trio of new Arabic-speaking characters will help teach children in the Middle East to read and write, as ... END_OF_DOCUMENT_TOKEN_TO_BE_REPLACED

Equality in divorce, a ban on polygamy: reformers of Islamic family law have a clear agenda. They are exploiting the ambiguity of traditional jurisprudence. By Joseph Croitoru END_OF_DOCUMENT_TOKEN_TO_BE_REPLACED

The stereotype of the oppressed Arab woman continues to dominate public discourse throughout Europe. Not only is this skewed image altering the perception of changing notions of ... END_OF_DOCUMENT_TOKEN_TO_BE_REPLACED

Comments for this article: "Habaybna" – for advice, community and inclusion

I’m interested in providing resources for my Arabic speaking families in my school. Glad to know about this website.

END_OF_DOCUMENT_TOKEN_TO_BE_REPLACED
Social media
and networks
Subscribe to our
newsletter