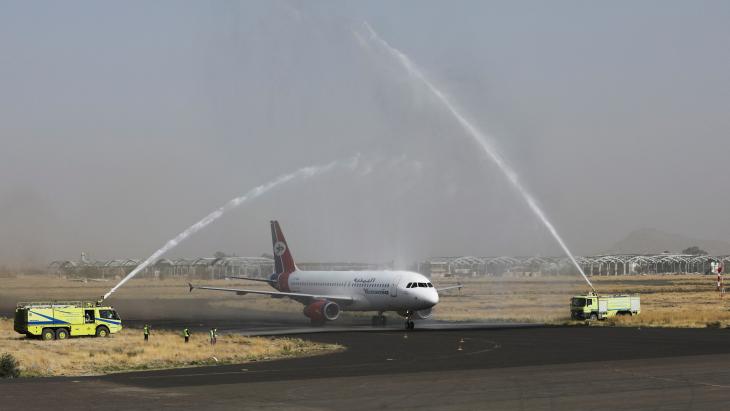 The first commercial flight in six years took off from Yemen’s rebel-held capital on Monday, officials said, part of a fragile truce in the county’s grinding civil war. The Yemen Airways flight, with 151 passengers on board, was bound for Jordan’s capital of Amman, according to media outlets run by the Iran-backed Houthi rebels.

Earlier, the plane had arrived in Sanaa from the southern port city of Aden to pick up the passengers. On touchdown, it was welcomed by a ceremonial “water salute”, according to a video posted online by the national carrier. The Houthi media office said a return flight was expected back in Sanaa from Amman later Monday.

The flight is part of the U.N.-brokered, 60-day truce agreement that the internationally recognised government and the Houthi rebels struck last month. The truce, which went into effect on 2 April, is the first nationwide cease-fire in Yemen in six years.

The truce accord calls for two commercial flights a week to and from Sanaa to Jordan and Egypt. The Houthi-held Sanaa is blockaded by the Saudi-led coalition, which backs the internationally recognised government.

The closure of the airport has inflicted major economic and humanitarian damage – thousands of people had lost their jobs as businesses providing services closed down or suffered heavy losses.

Before the blockade, the Sanaa airport had an estimated of 6,000 passengers a day, and more than 2 million passengers every year, according to the Norwegian Refugee Council, an international charity working in Yemen.

The flight was initially due to take off on 2 April, but a dispute over passports issued by the Houthis had delayed the departure date. This time, the internationally recognised government allowed passengers with Houthi-issued documents to board the flight.

The government-run SABA news agency said last week that new Yemeni passports would be issued in Jordan for those arriving with Houthi-issued travel documents.

Erin Hutchinson, Yemen director at the Norwegian Refugee Council, said the take-off of the first flight was a “stepping stone towards a lasting peace for Yemen”.

“The long overdue re-opening of the airport was one of the major objectives of the truce," she said, urging warring parties to work towards implementing other elements of the deal, including reopening of roads around the government-held Taiz and other provinces.

Along with the flights, the truce also included allowing 18 vessels carrying fuel into the Red Sea port of Hodeidah, which is controlled by the Houthis, over a two-month period.

The ceasefire came amid concerted international and regional efforts to find a settlement to the conflict that has devastated the Arab world’s poorest country and pushed it to the brink of famine.

Yemen’s civil war erupted in 2014, when the Houthis seized the capital Sanaa and forced the government into exile. The Saudi-led coalition entered the war in early 2015 to try to restore the government to power.

Despite daily violations reported by both sides, major ground and air clashes have subsided and the rebels have stopped their cross-border attacks on Saudi Arabia and the United Arab Emirates, another pillar of the anti-Houthi coalition.    (AFP)

END_OF_DOCUMENT_TOKEN_TO_BE_REPLACED
Social media
and networks
Subscribe to our
newsletter