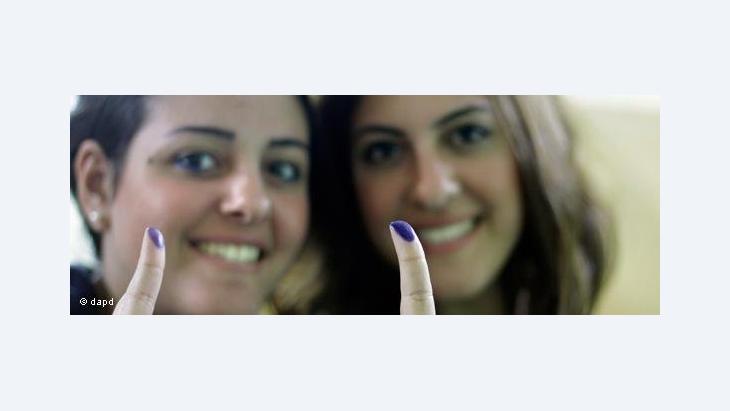 Despite warnings of rioting, thousands of Egyptians gathered at polling stations in the early hours of Monday morning to cast their votes. The unexpectedly high voter turnout indicates that in future, Egyptians are not about to allow anyone to deny them their free democratic rights again. Observations from Cairo by Amira El Ahl

Sahar Hanna knew exactly who was going to get her vote. On the party list, the 20-year-old Copt put an X next to the Egyptian Bloc, an alliance of the Social Democratic Party, the Tagammu Party and the Free Egyptians Party.

The two crosses on the list of independent candidates were also swiftly dealt with: one for a worker, the second for a farmer, as stipulated. Sahar Hanna was voting for the first time in her life, but she was well prepared ‒ unlike many others at her polling station in Shubra, a district in northern Cairo.

By midday, confusion had taken hold. In this kind of chaos, casting a secret ballot was an impossible undertaking. Voters mingled and talked across each other, exchanging tips and viewpoints. Many didn't have the first clue what they were supposed to be doing, let alone for whom they were going to vote. Many even asked the polling booth officers where they should put their cross. This is because although each candidate also has a symbol to make him or her recognisable to illiterate voters, many people are quite simply overwhelmed by the electoral system and the large volume of candidates.

It was important for Sahar Hanna to vote; she stood in line to do so for almost two hours and was undeterred by the masses of people at the polling station. "I want a better Egypt and to have a say in how things progress politically in this country," said the student.

Changing the course of politics in Egypt 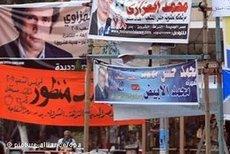 Courting the electorate: more than 50 parties are standing in the parliamentary elections, as well as individual candidates; the Muslim Brotherhood's Freedom and Justice Party is being tipped to win

​​These are the first free parliamentary elections after three decades of Mubarak rule, and they will have a significant impact on Egypt's future political direction.

The lower and upper houses are each being elected in three phases, with voters from nine of the 27 governorates being invited to cast their ballots during each phase.

The first phase began on Monday in, among others, the governorate of Cairo. The elections are taking place following large-scale rioting the previous week, which claimed the lives of at least 42 people and left thousands injured.

Many of the demonstrators on Cairo's Tahrir Square and other locations across the nation had called for a boycott of the poll, but in the end, all political parties remained committed to the scheduled starting date for the election. And despite warnings of further rioting, thousands of people gathered at polling stations in the early hours to cast their ballots.

In Zamalek, one of Cairo's most affluent districts, long queues started forming at 7.00 a.m. outside polling stations. Many came in groups, with friends, some had music or a book, as well as stools to make the wait more comfortable. The queues lengthened with every hour that passed; by midday they snaked around several blocks. "I've never seen anything like it, the voter turnout is unbelievable," said businesswoman Nada Gamal, also voting for the first time in her life in her mid-50s.

There have, however, been some hitches. Some parties were still campaigning outside polling stations on election morning, which is forbidden. But neither police, nor the soldiers or magistrates supervising the poll took any action.

Robust public interest in Egypt's first free parliamentary poll: voter turnout at many polling stations was between 50 and 70 percent, much greater than for previous elections under Egyptian dictator Mubarak, toppled in February after a wave of nationwide demonstrations

​​There were also difficulties inside the polling stations themselves. Each voter has to complete two ballot papers. "We were told that every ballot paper has to have a stamp, but there's a stamp missing on one of the ballot papers and the magistrate is just signing it," explained Nada Gamal. She and other women in the queue discussed the matter at length with the election officers and in the end, one young woman called a hotline number to find out whether ballot papers without stamps were valid. "I didn't get up at the crack of dawn to find out later that my vote is null and void," she said.

After a wait of more than two hours, Nada Gamal exited the polling booth. She dipped her forefinger in ink and stepped out onto the street, beaming. "It feels good to have voted," she said. But she expressed some concerns. The discussion with the electoral officials, who would have preferred her to keep her mouth shut, has made her furious. The idea that every voter has the right to cast a ballot and insist on free and fair elections hasn't quite sunk in with everyone. "How do you plan to remove a corrupt and rotten system that's been in place for 60 years with one election?" she asked.

The high voter turnout is at least an indication that in future, Egyptians are not about to allow anyone to deny them their right to vote again.

Home
Print
Newsletter
More on this topic
The Role of Religion in Egyptian Society: ''Dictatorship is out in Egypt''Egypt's Parliamentary Elections: Moving in the Wrong Direction?
Related Topics
All Topics
Date:
Mail:
Send via mail

END_OF_DOCUMENT_TOKEN_TO_BE_REPLACED
Social media
and networks
Subscribe to our
newsletter