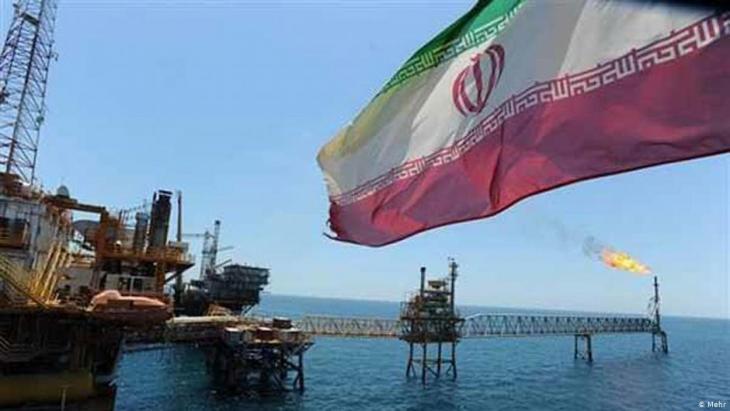 First INSTEX transaction with Iran
Trade as an obstacle course

Germany and other member states of the European Union are for the first time making use of the so-called INSTEX mechanism to circumvent the sanctions imposed on Iran by the United States. By Birgit Svensson in Cairo

It was long overdue. The first INSTEX transaction has now been concluded. A small one, according to insiders in Tehran, but a transaction nonetheless. The European agency set up to circumvent the US trade sanctions against Iran has been in operation for a good year now, but this is the first time it has been put to use.

Now, at last, France, Germany and the UK were finally able to deliver medical equipment to Iran, one of the countries most severely affected by the corona pandemic. The Foreign Office in Berlin is confident that, now that the first deal has been concluded, INSTEX will be "working on further transactions and refining the mechanism".

INSTEX, which stands for "Instrument in Support of Trade Exchanges", is designed to be "a sustainable long-term solution for legitimate trade between Europe and Iran" in the context of ongoing efforts to uphold the nuclear agreement with Tehran.

Cash injections for an ailing economy

The spokesman for the Iranian Foreign Ministry announced on 14 March that Tehran had received medical equipment or financial support from countries including China, Japan, Qatar, Russia and Turkey as well as from France, Germany and the UK. The Iranian government and people "never forget who their friends are in times of need", the spokesman commented at the time.

The Islamic Republic of Iran – along with Italy, Spain and the US – is currently one of the countries hardest hit by the pandemic. According to the government in Tehran, as of 6 April more than 58,000 people were infected with the novel coronavirus and more than 3,600 people had died of related lung complications. The number of unreported cases is likely to be considerably higher.

Instex: a paper tiger fighting the US sanctions against Iran? INSTEX aims to provide a sustainable, long-term solution for legitimate trade between Europe and Iran as part of the continued efforts to preserve the JCPOA (Joint Comprehensive Plan of Action), which was concluded in July 2015

After US President Donald Trump unilaterally withdrew from the nuclear deal in 2018, the EU instrument was set up as a way to rescue the agreement. INSTEX provides a vehicle for business transactions to be carried out with Iran while protecting companies from US sanctions. This grand design disguises a desperate attempt by the Europeans to stand up to the Americans and not waste years of efforts and hopes for better relations with Iran.

INSTEX has its headquarters at 139 Rue de Bercy in Paris. The manager is British; its president German. Ministry officials from the three foreign ministries sit on the supervisory board. Six other countries joined the agency at the end of November: Belgium, Denmark, Finland, the Netherlands, Norway and Sweden. But some of them are keeping a low profile – for fear of the Americans.

Michael Bock, a crisis-tested diplomat, is serving as president. The 66-year-old was German Ambassador in Cairo when the Arab Spring began, so he witnessed first hand the overthrow of longstanding ruler Hosni Mubarak and the ultimate failure of the struggle for democracy and civil rights.

Later, he was on the scene in Colombia when the rebel organisation FARC reached an agreement with the government, negotiating a fragile peace. Bock was in retirement when he was approached and asked whether he felt up to the task of breathing life into INSTEX. He said yes, without knowing exactly what he was getting himself into.

"Since then, this has become a round-the-clock job with uncertain outcomes and a steady stream of stalemates," says Bock. The president of INSTEX was not even spared contracting the Covid-19 virus. He was not infected in Iran, where he has spent a great deal of time recently, but in Paris, where he often travels for consultations. After three weeks of quarantine and stockpiling of essentials, he has now recovered and can carry on with his work. But Bock has his doubts as to whether INSTEX can do anything to stop the freefall of the Iranian economy, because the damage done is already enormous. 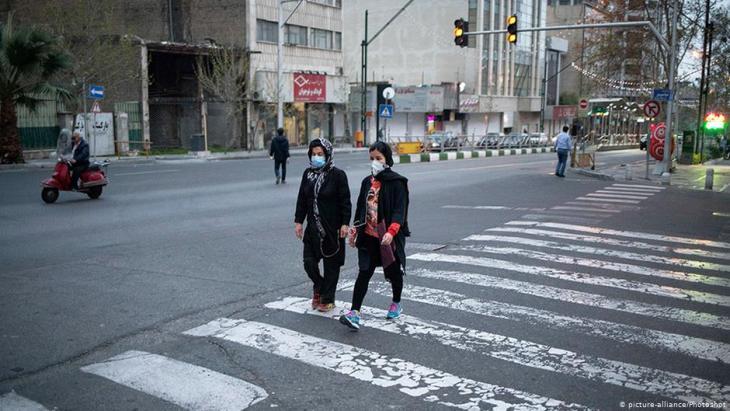 An empty street in Tehran, the capital of Iran. The Islamic Republic of Iran is currently one of the countries hardest hit by the pandemic. According to the government in Tehran, as of 6 April, more than 58,000 people were infected with the novel coronavirus and more than 3,600 people had died of related lung complications. The number of unreported cases is likely to be considerably higher

In May 2018, the US administration under President Donald Trump broke the international agreement designed to curb Iran's nuclear energy programme and re-imposed drastic sanctions on the country. Although humanitarian aid supplies such as medicines and medical equipment are formally excluded from these sanctions, Iran is practically unable to buy such goods on the international market because the banks refuse to back business transactions with Tehran due to US sanctions.

All sectors of the economy are deteriorating, but health care has been particularly badly hit. The regime of the mullahs evidently did not plan for the eventuality that it would be unable to continue selling oil. It therefore appears to be incapacitated by the situation that has now arisen.

A year and a half ago, Tehran was still selling a total of 2.5 million barrels per day. Now, sales are down to 300,000 to 500,000 barrels a day, and even that does not all go through official channels. Revenues that were already budgeted have thus come in below expectations.

This means that Iran is facing a massive problem on the income side, and the budget for the coming calendar year, which began on 21 March, no longer includes revenues from the oil business. The sanctions have, therefore, had a very swift impact. In May 2019, the last US exemption permits for eight states that were still allowed to import oil expired.

The Americans are applying considerable pressure – "maximum pressure", as Trump calls his Iran strategy – and are practically paralysing Iran's oil trade. Because the European economy is heavily intertwined with that of the USA, it will be extremely difficult to circumvent the sanctions.

French President Emmanuel Macron made a try in early September, announcing a $15 billion credit line for Iran that would be based on oil supplies, but it never came to fruition because only three weeks later, oil fields were burning in Saudi Arabia. The US administration blamed Iran for the attack; France, Germany and the UK, the founders of INSTEX, came to the same conclusion. Nobody believed that the Yemeni Houthis, who claimed responsibility for the attack in Saudi Arabia, were the actual perpetrators. 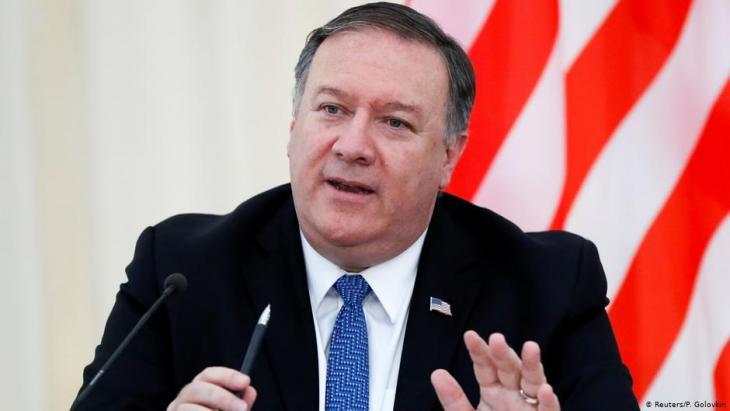 At the end of March, US Secretary of State Mike Pompeo held out the possibility that the US may consider easing sanctions on Iran and other nations to help fight the coronavirus epidemic. However, he outlined no concrete plans to do so. Asked if there might come a point at which Washington might re-evaluate its stance on easing sanctions, Pompeo told reporters: "We evaluate all of our policies constantly, so the answer is – would we ever rethink? – Of course."

Less than a week after the attacks on the oil fields, the USA imposed new sanctions on Iran's central bank and sovereign wealth funds for allegedly financing terrorist activities. "We have now cut off all sources of income for Iran," said Finance Minister Steven Mnuchin. The USA warned all governments to stop cooperating with Iran's central bank. Macron's deal with Tehran was off the table.

Now that financial transactions with Iran have come to an almost complete halt due to international entanglements and the American influence, all that's left for the agency are barter deals. In such conditions, the big question is whether INSTEX will ever be able to facilitate exchanges on the necessary scale.

Iran does not have much more to offer for exchange than oil. The president of INSTEX describes the ratio of other goods flows as 20 to 80. The Europeans formerly exported four times more to Iran than was imported from the country. Only Greece and Italy bought oil from Iran.

Other exports coming out of Iran were minimal: Persian carpets from Isfahan and pistachios from Rafsanjan and Kerman, the home province of General Qassem Soleimani, who was killed by the Americans. "We are now considering whether we can act as a commodity broker," says Michel Bock, "by selling Iranian medical technology that is not suitable for the West to Africa and in return supplying Western products to Iran.

Various models are currently under review, but the agency has not yet reached a decision. The problem with INSTEX, says Bock, is not so much the Iranians as the Europeans. As long as the UK sits on the supervisory board, the Americans also have a seat at the table. Nevertheless, Bock hopes that the current €500,000 transaction is a good start, paving the way for further, more extensive deals.

Since returning to power in Afghanistan, the Taliban have steadily eroded the rights and opportunities of women and girls, particularly their access to education. But Afghans are ... END_OF_DOCUMENT_TOKEN_TO_BE_REPLACED

The book "The Invention of the Maghreb: between Africa and the Middle East" prompts us to review basic terminology. This includes terms that we use almost every day as if they are ... END_OF_DOCUMENT_TOKEN_TO_BE_REPLACED

Tunisia has been going through a severe economic and political crisis in recent years. More than one in three young people there are unemployed. For many skilled, qualified and ... END_OF_DOCUMENT_TOKEN_TO_BE_REPLACED

At the end of every year, the team at Qantara.de gives you a run-down of the ten most-read articles on the site over the past 12 months. Here is a quick overview of the stories ... END_OF_DOCUMENT_TOKEN_TO_BE_REPLACED

The government in the Netherlands, one of the last European nations to abolish slavery, has made an historic apology. But some feel that there is still a long way to go. By Ella ... END_OF_DOCUMENT_TOKEN_TO_BE_REPLACED

To celebrate the bicentenary of the deciphering of the Rosetta Stone, the British Museum is running an exhibition entitled "Hieroglyphs: unlocking ancient Egypt" until February ... END_OF_DOCUMENT_TOKEN_TO_BE_REPLACED
Author:
Birgit Svensson
Date:
Mail:
Send via mail

END_OF_DOCUMENT_TOKEN_TO_BE_REPLACED
Social media
and networks
Subscribe to our
newsletter