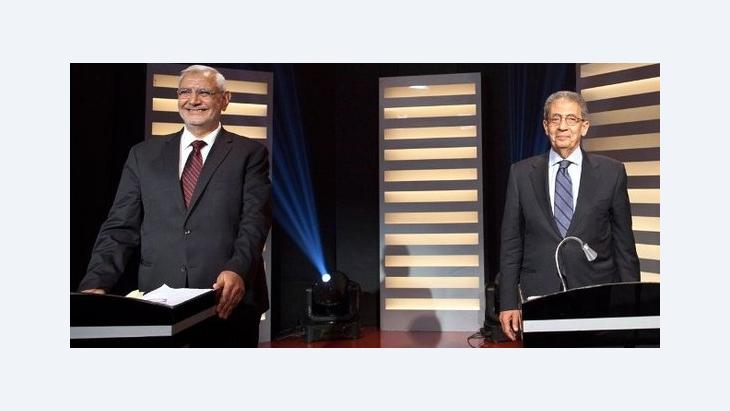 A chapter of television and democracy history was written live before the eyes of millions of Egyptian TV viewers when for the first time candidates vied for the highest office of the land in a televised debate, Amr Moussa squaring off against Abdel Moneim Aboul Fotouh. By Karim El-Gawhary

Cairo's streets were just as deserted as if the national football team had been playing a match, and cafés were packed full of curious onlookers following the sparring on screen: the televised duel between Amr Moussa, former secretary-general of the Arab League and former foreign minister under Mubarak, and Abdel Moneim Aboul Fotouh, a physician and former member of the Islamist Muslim Brotherhood.

Many invited friends over to watch the TV debate at home. At least in terms of the timing and duration of the broadcast, Cairo lived up to its reputation as a city that never sleeps. For four long hours, until two o'clock in the morning, the candidates fought neck-and-neck and at times with no holds barred, especially when it came to trying to discredit their opponent.

Although the debate was strictly regulated according to the US model and broadcast by several independent private television stations, whenever the candidates had the opportunity to question one another outside of their two-minute answers to the 24 pre-defined questions posed by the moderators, the discussion heated up. 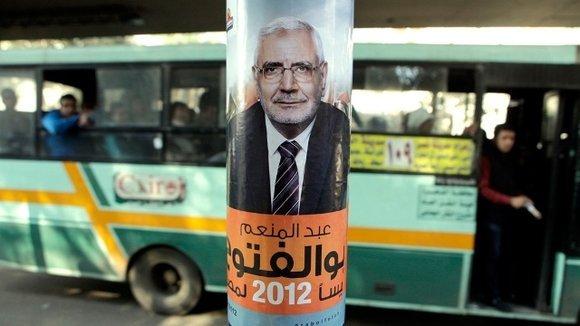 Political beacon of hope or compromise candidate? Since he turned his back on the Muslim Brotherhood, Aboul Fotouh is regarded by many Egyptians as a moderate and independent politician. Even the Salafists support him now that their candidate has been disqualified by the election commission and because they don't view the Muslim Brotherhood candidate as offering a real political alternative for them

​​Aboul Fotouh, who left the Muslim Brotherhood in 2011 for ideological reasons, citing it as too conservative, and in order to launch his own presidential campaign, was portrayed by Moussa as an Islamist in disguise, with a secret agenda.

Moussa accused Aboul Fotouh of having connections with the so-called "Islamic group" at the university, which later became militant. In the end Moussa warned the audience that with Aboul Fotouh as president the country would return to the days of terrorism and insecurity.

A man of the old regime?

Aboul Fotouh countered by describing Moussa as a man of the Mubarak regime, who as secretary-general of the Arab League had once publicly pushed for Mubarak's re-election. "I would like to hear from you one single word of the opposition you put up against the Mubarak regime back then," said Aboul Fotouh, who was imprisoned several times under Mubarak and his predecessor Sadat. While Moussa often looked aggressive on screen, agitatedly pointing his finger at the adversary behind the podium next to him, Aboul Fotouh maintained his composure.

At other times, the debate was directed forward toward the audience, for example when the candidates were asked to describe the relationship between religion, state and military, and to outline their proposals for dealing with social issues, the health-care system and the role of women.

Moussa consistently presented himself as the candidate with the greater fund of political experience needed to lead the country into a new era. Aboul Fotouh in turn emphasised his role as a man of the revolution, remembering at the beginning of the debate those who lost their lives in the uprising against Mubarak, to whom he wished to do justice as president with a fundamental transformation of the country.

He has forged quite a colourful coalition of followers by now, gaining the support of a portion of the Salafists, the younger members of the Muslim Brotherhood, as well as some liberals and leftists: even the Tahrir youth see him as the best and most promising candidate. It is precisely this contradictory coalition that Moussa continually used as ammunition against him in the debate, asking how he proposed to merge these divergent interests in a coherent programme.

Candidate of the "silent majority"

Moussa for his part has united behind him all those who fear the political influence of the Islamists, as well as the so-called "silent majority" who are hoping less for change than for a return to order. 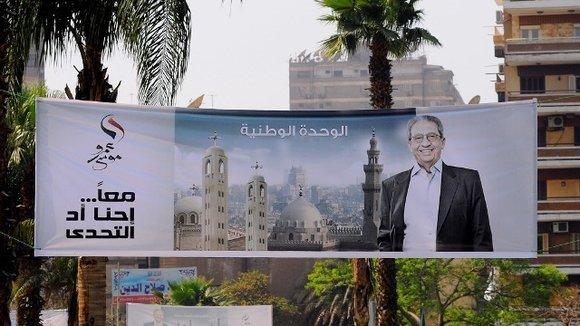 It looks like a tight race: if no candidate manages to gain an absolute majority in the elections on 23 and 24 May, a run-off will be held. At the end of June, the Supreme Military Council, which has ruled the country since Mubarak's departure, is supposed to hand over power to the new president

​​According to a recent opinion survey conducted by a political consulting institute working for the cabinet, which however took place before the TV debate, in early May, nine per cent of those surveyed would vote for Abdel Moneim Aboul Fotouh, followed by eight per cent for the last prime minister under Mubarak, Ahmad Schafiq, and seven for Moussa. The other ten candidates would obtain a maximum of four per cent of the votes, among them the official Muslim Brotherhood candidate, Muhammad Mursi.

The survey determined that 39 per cent of voters have not yet decided whom they will choose, with a slight majority tending toward Aboul Fotouh. Another 17 per cent said they had not yet decided if they would vote at all on 23 and 24 May, while eight per cent provided no information. It is however unclear how reliable such surveys are in democratically inexperienced Egypt.

The probable outcome is that none of the 13 candidates will collect over 50 per cent of the votes, and that a run-off will follow in June. In Mubarak's day, there was usually only a referendum in which voters could vote "yes" or "no". Opposing candidates were allowed just once, in 2005.

In every case, Mubarak miraculously won some 90 per cent of the votes. As a Tweet commented with regard to the recent four-hour TV debate: "Mubarak is lying in bed somewhere in a Cairo hospital, chuckling to himself and thinking: I didn't have to give even a single interview to get this job!"

END_OF_DOCUMENT_TOKEN_TO_BE_REPLACED
Social media
and networks
Subscribe to our
newsletter