Persian culture is in the spotlight in an exhibition at the James Simon Gallery in Berlin. The artefacts feature unexpected multicultural influences. By Christine Lehnen 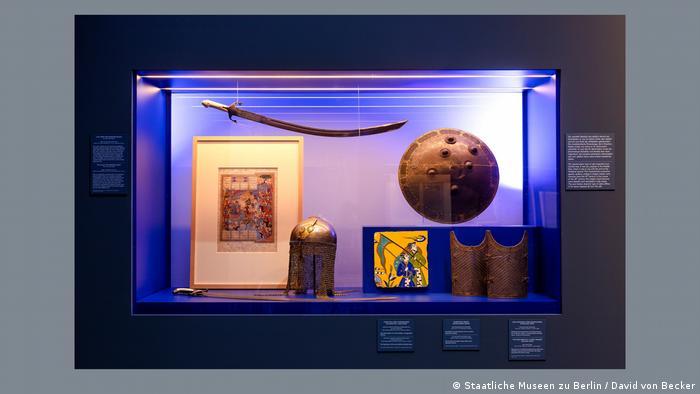 A long cultural history: even though our perception of Iran is influenced by current political issues, the country's historical and cultural significance is undeniable, points out Stefan Weber, director of the Museum of Islamic Art and co-curator of the Berlin exhibition, "Iran. Five Millennia of Art and Culture." The show features exhibits from the early civilisations through to the modern era 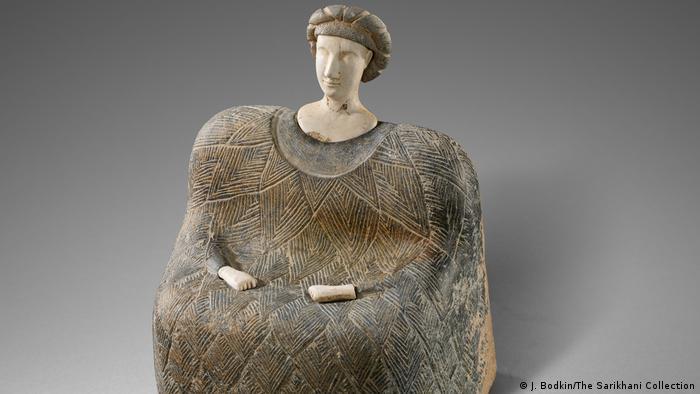 Chlorite figurine (3rd millennium BC): different urbanised cultures arose in Iran as early as 8,000 years ago. The ancient civilisations were stimulated by trade with their neighbours in Mesopotamia and the Indus, and various fine art objects were created in the region. The first great Iranian empire, now known as Elam, developed in the 3rd millennium BC in the southwest of modern-day Iran, in the city of Susa in the Zagros Mountains 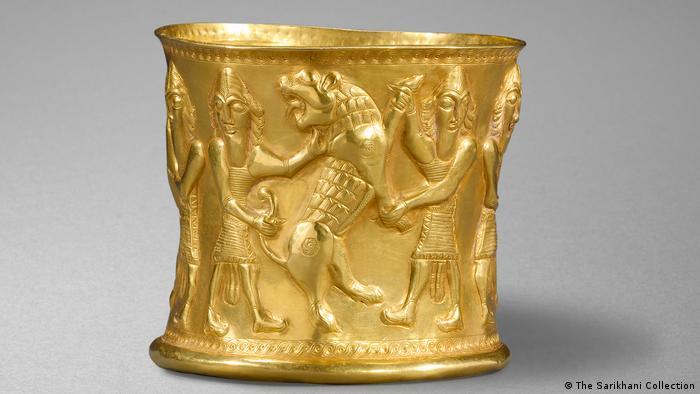 Gold vessel (12th-11th centuries BC): in the late 3rd and 2nd millennium BC, numerous peoples lived in the Zagros Mountains and along the Caspian Sea. The great powers of the time depicted the mountain dwellers without a writing system as uncultivated and barbaric. But richly decorated artefacts found in Luristan, Ziwiye, Amlasch and Marlik are proof of their artistic achievements 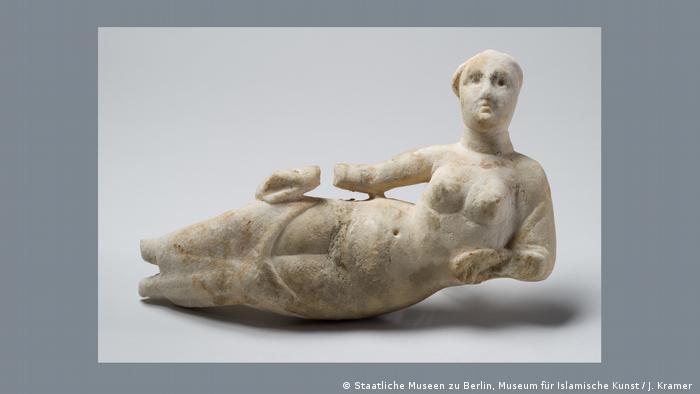 Female goddess (2nd century AD): early Persian civilisations developed impressive technologies, such as the underground water transportation system called the "qanat" in the early 1st millennium BC, now listed as a World Cultural Heritage. This figurine is comparatively recent: it dates from the 2nd century AD, and shows multicultural influences, as such nude depictions of goddesses were also typical of Greek sculptures 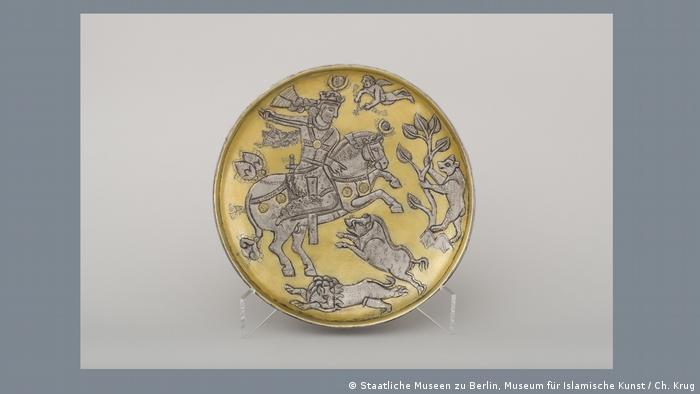 Royal hunt for lions, bears and boars (6th-7th centuries AD): five centuries years later, the Sassanid Empire ruled over what is now Iranian territory – a multi-ethnic region located between China, India, Arabia, North Africa and Byzantium. Works of art were created there that were admired long after the Arab conquest in the 7th century AD 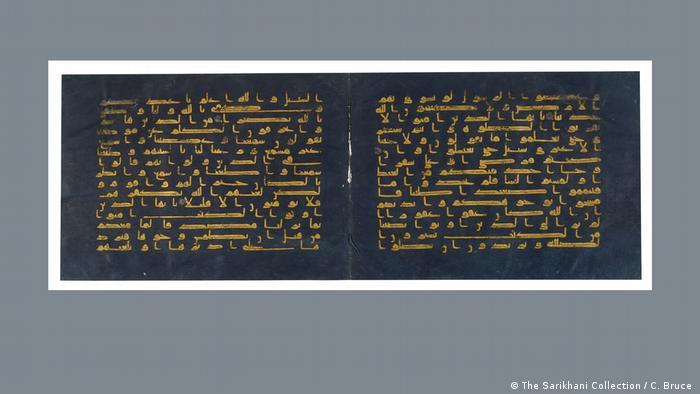 Double sheet from the 'Blue Koran' (9th century AD): the conquest of the Sasanian Empire (635 - 651 AD) by Arab tribal fighters, leading to the introduction of Islamic law and a poll tax for non-Muslims, triggered resistance among the local population. The Zoroastrian religion eventually declined. Exceptional early manuscripts such as the "Blue Koran" illustrate the enormous importance of Arabic script for art 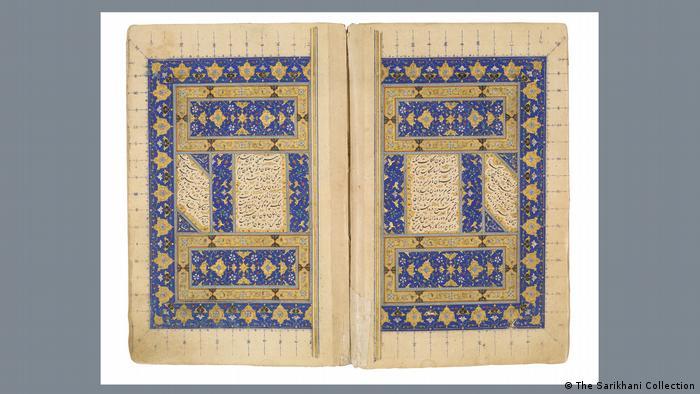 Ancient Rumi 'mathnawi' (895): a Persian-Islamic culture emerged from the 9th-13th centuries. Persian complemented Arabic as the language of poetry and science. The capital, Bukhara, developed into the centre of fine arts and universal learning. In the 15th century, after a war, Herat (today's Afghanistan) took over this role. Poet Rumi is world famous to this day; shown here is one of his mathnawis, or poems 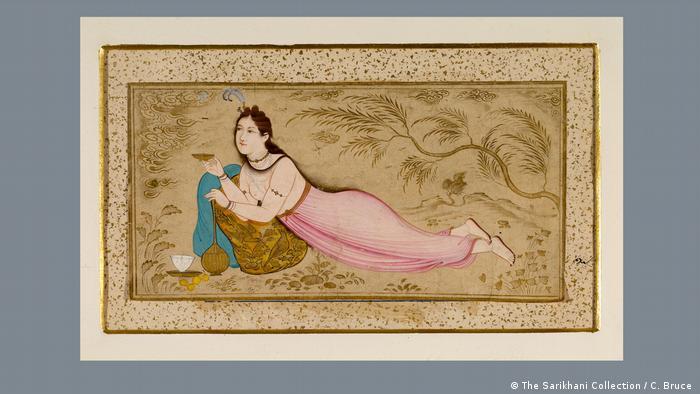 'Lady Drinking Wine' by Mu'in Musawwir (1672): culture flourished under the Persian dynasty of the Safavids in the 16th and 17th centuries. Involved in global trade, the urbanised society had artists working for the imperial court. In the capital of Isfahan, mosques, palaces, gardens and cafes developed around the impressive Naqsh-e Jahan Square (which translates as "Image of the World Square"), now a UNESCO World Heritage Site 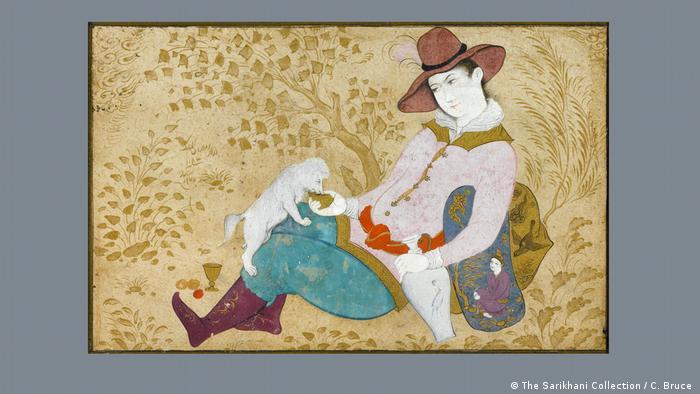 'European youth with wine bowl and lap dog' (1673): according to the exhibition organisers, Iran historically served as a "cultural highway" connecting Asia, Africa and Europe. This ink drawing from Isfahan from 1673 is an example of intercultural exchange. Artists were inspired by court life, typically depicting the fashion and lifestyle of the urban elite 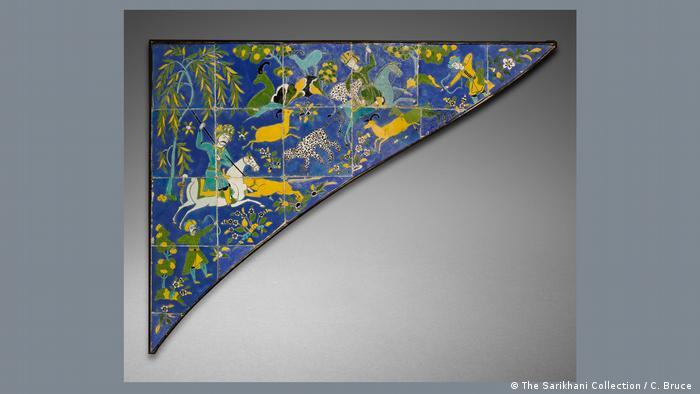 Hunting idyll in the park' (17th century): economic and political crises ushered in the end of the Safavid era in 1736. As part of its legacy, the dynasty contributed to the Shia transition to modernity and the creation of the Iranian nation-state, according to the curators of the exhibition. "Iran. Five Millennia of Art and Culture" is on show from 4 December 2021 to 20 March 2022 at Berlin's James Simon Gallery

END_OF_DOCUMENT_TOKEN_TO_BE_REPLACED
Social media
and networks
Subscribe to our
newsletter