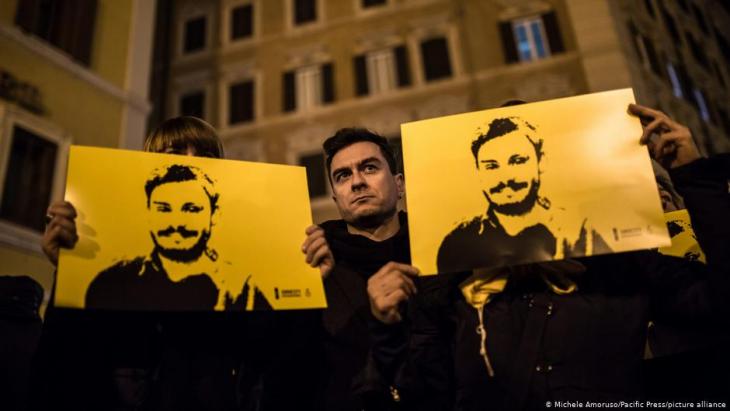 Egypt has never been called to account for the murder of Giulio Regeni, nor for the numerous human rights violations committed by the Sisi regime. Focusing only on stability, European governments are increasingly losing touch with actual developments in Egypt, say Lars Brozus and Stephan Roll

On 3 February 2016, the mutilated body of Giulio Regeni was discovered on the outskirts of Cairo. The Italian scholar had been conducting research in Egypt on the development of independent trade unions. This evidently attracted the attention of the country's security authorities, who fear any form of unmonitored civil society organisation as potential opposition.

Regeni was last heard from on the evening of 25 January 2016, the fifth anniversary of the start of the popular uprising against the Mubarak regime, a day when Cairo was swarming with security forces. Multiple witness statements and circumstantial evidence indicate that Regeni was subjected to inhumane torture by Egyptian security forces for days. Although an in-depth investigation by the Italian public prosecutor's office was able to identify four high-ranking employees of the Egyptian security apparatus as the main perpetrators, the authorities in Cairo have stubbornly refused to initiate criminal proceedings.

Europeans upgrade Egypt's status rather than pushing to uncover the truth

In the wake of the murder, European governments and parliaments have repeatedly demanded clarification of the incident. The German government, which itself has gathered intelligence on the case, has addressed Regeni's fate in a series of bilateral talks. However, the incident has not had any consequences for Europe's political and economic relations with the most populous country to their south.

"[N]ot much has changed in EU policy towards Egypt since 2019 and recommendations from human rights groups and the European Parliament remain largely unheeded."

And yet the gruesome murder of Giulio Regeni is not an isolated case. Ever since the military coup in 2013, led by then defence minister Abdul Fattah al-Sisi, the state of Egyptian civil society has deteriorated dramatically. International observers estimate that there are as many as 60,000 political prisoners languishing in the horrendously overcrowded Egyptian prisons. Local human rights activists report widespread and systematic use of torture at police stations.

According to Human Rights Watch, Egypt is among the ten states where the death penalty is most frequently imposed and carried out. And Reporters Without Borders cites Egypt under President Sisi as one of the countries harbouring the highest number of imprisoned journalists.

But instead of holding Egypt's leadership politically responsible for this situation, the Europeans have repeatedly upgraded its status in recent years. Since Regeni's death, there have been a number of high-level state visits. Bilateral development loans and, not least, generous support under a comprehensive IMF agreement have been granted without any political conditions being imposed. Particularly worthy of note is that arms exports also continue to flow on a grand scale. Egypt is a major client not only for Germany and France. Even Italy continues to supply the country with weapons.

Social media make many things possible – including the unwanted circulation of intimate private photos. This has given rise to new forms of crime and sexual blackmail. An ... END_OF_DOCUMENT_TOKEN_TO_BE_REPLACED

The change in U.S. president is also having an impact on the conflict between Turkey and Greece. Since the USA has started to play the Greek card, the strategic situation in the ... END_OF_DOCUMENT_TOKEN_TO_BE_REPLACED

Arab women played a leading role in the protest movement of 2011. Since then, ongoing social transformation has had a considerable impact on their lives. What is their assessment ... END_OF_DOCUMENT_TOKEN_TO_BE_REPLACED

They’ve already got the Louvre; they’ll soon have a Guggenheim Museum as well – and now the Emirates have added literature to their quest for cultural supremacy in the Arab world ... END_OF_DOCUMENT_TOKEN_TO_BE_REPLACED

Years in the making, Sisi's elite New Administrative Capital will isolate most Egyptians from their centres of government in an effort to fortify the regime against any social ... END_OF_DOCUMENT_TOKEN_TO_BE_REPLACED

Professor Timothy Brennan's "Places of Mind: A Life of Edward Said" is a detailed biography of one of the most important intellectuals of the twentieth century, taking us on a ... END_OF_DOCUMENT_TOKEN_TO_BE_REPLACED
Author:
Stephan Roll und Lars Brozus
Date:
Mail:
Send via mail

END_OF_DOCUMENT_TOKEN_TO_BE_REPLACED
Social media
and networks
Subscribe to our
newsletter