Football War between Algeria and Egypt
Game of Hate

Algeria's triumph in the qualifying round for the FIFA World Cup has unleashed an unprecedented crisis in Egypt. After games in Cairo and Khartoum where the Algerian team and its fans were the victims of violent attacks, all the lip service to Arab brotherhood seems to have popped like a soap bubble. Hamid Skif looks into a bizarre internecine conflict 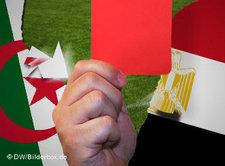 ​​Egypt has still not gotten over its defeat by the rival team in the 18 November play-offs in Khartoum. The country is pursuing a campaign of vitriol and absurd polemics in the media, using "intellectuals" and indoctrinated artists as "official" mouthpieces.

Even Al Azhar University has insisted on having its say, its imams – suddenly turning into football experts – going so far as to excommunicate the Algerians, saying that they are not really Muslims, much less Arabs.

The Algerians for their part are revelling in their victory. After a long, 24-year absence, they will once again be returning to the arena for world football's major event. Turning a deaf ear to Egypt's slurs and diatribes, the Algerians are concentrating on getting ready for South Africa, and for the African Nations Cup taking place in January in Angola. They might very well cross paths there with the Egyptians.

FIFA President Sepp Blatter explained dryly, and perhaps with a touch of cynicism, that he "is convinced that Algeria and Egypt will be facing off again and that everything will go smoothly". He promised to make sure "that the official representatives of both teams will come together."

In fact, however, the Algerians suspect Blatter of taking sides. They don't understand why FIFA didn't cancel the game in Cairo and take disciplinary measures against the Egyptians after the Algerian team bus, supposedly under Egyptian police protection, was pelted with stones. After all, this is the same FIFA that lost no time in censuring Diego Maradonna just 24 hours after he made offensive remarks against the press. 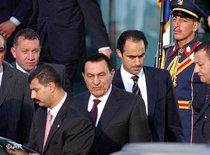 "Feeding the Algerians to the hungry jaws of the Egyptian mob": the Mubarak clan have apparently used the football crisis to tighten their grip on power

​​As if trying to substantiate these suspicions even further, the organisation's Secretary General, M. Valcke, remarked in an interview in the Algerian newspaper Compétition that a civil war in Egypt could fortunately be narrowly averted thanks to the fact that the game was played as planned!

After the Algerians, insisting that the bridges with Egypt had not yet been burned, rejected the intervention of Amr Moussa, Secretary General of the Arab League, whom Muammar Gaddafi had asked to step in to try to calm the troubled waters, Sepp Blatter is now suddenly assuming the mantle of mediator.

The dispute has become so serious, however, that his efforts seem doomed to fail – even more so now that the Egyptians have boasted that they plan to boycott any sporting or cultural events involving Algeria. But not only that: they are also demanding apologies and compensation.

How did things come to this pass?

For the Mubarak clan, who have been in power since 1981 and are preparing for the enthronement of Gamal as his father's successor in 2011 in keeping with "Jumlukiya"*, it went without saying that Egypt would of course qualify for the World Cup.

The triumph that would surely be theirs would revive the image of an autocracy that is currently being undermined by an explosive economic and social situation, hopefully ensuring it a further period in office. What's the best way to handle circumstances like these?

"Football is not a matter of life and death - it's more important than that." - Algeria's 1:0 victory over les Egypchiens had tempers running high

​​Apparently, it's feeding the Algerians to the hungry jaws of the Egyptian mob, whose anger has been stoked by ridiculous media campaigns, and doing it with such conviction that the president of the National Sport Council, equivalent to a ministry post, went so far as to say of the 2,000 Algerian fans permitted to enter Egypt for the game: "Do with them what you will!"

His statement was backed by both of Mubarak's sons, who poured as much oil as possible onto the fire. Unfortunately, their opponents were not willing to play the role of scapegoat. With hurt pride, the Algerians mobilised all possible flights in order to bring tens of thousands of fans to Egypt for the play-off game in Khartoum, all of them buoyed by the conviction that Egypt would not walk off with a victory on neutral ground as had always been the case before.

Football and politics in Algeria

Credit for Algeria's win, which was celebrated like a second Independence Day and is tantamount to Algeria's re-entry into the international sports limelight, is naturally being taken by President Abdelaziz Bouteflika. He did everything in his power to support the team, knowing full well that a defeat combined with the aggression facing the national players and their fans in Egypt would have dealt a deep blow to his regime.

The reception that millions of Algerians prepared for their returning heroes let them forget for a brief moment their increasing anger at the high cost of living and the unemployment plaguing the country's neglected youth, who suffer from every conceivable social disadvantage and are increasingly seeking a vent for their problems in violent uprisings – and all this even though Algeria's oil reserves are bringing huge investments into the country. 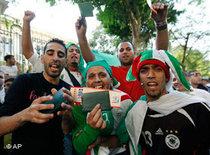 "Sport has become the opium of the masses." - Algeria's 1:0 over Egypt was celebrated in the streets of Algiers "like a second Independence Day", writes Hamid Skif

​​Just as in Cairo, the government in Algiers is keeping a close eye on the football calendar, offering as it does a way for citizens to blow off steam in a relatively harmless manner. Sport has become the opium of the masses. In the opinion of journalist Gamal Fahmi, "the Arab regimes are anchoring football in the spirit of their people in order to distract their attention from the pervasive political failures at home".

The damage caused by the crisis will surely be felt in relations between the two countries for a long time to come. This is even more the case now that the Algerians were the victims of what could almost be called a manhunt in Egypt, while back in Algeria goods from Egyptian companies were being burned in protest.

In spite of it all, the Algerian government is still trying to maintain "normal" relations with its Egyptian counterpart, sweeping from the table the massive criticisms coming from the street and the media, which ask how Algeria can still be prepared to negotiate with a country that virtually set a trap for its Algerian guests.

The football play-offs have brought resentments and reproaches on both sides to the surface, unmasking grandiloquent talk of brotherhood and a shared destiny as empty posturing.

After the Egyptians decided that Algerians are not really Muslims or Arabs, an identity that not all of them lay claim to anyway, the Egyptian media and authorities went so far as to insult the memory of Algeria's freedom fighters who lost their lives in the fight to cast off the yoke of their country's colonial rulers, calling the Algerians "barbarians" and "terrorists" and even maintaining that, had it not been for the Egyptians, Algeria would still be a colony.

It was supposedly the Egyptians who taught the Algerians Arabic. One can only imagine what might have happened in the past few months if Egypt and Algeria shared a common border.

Algerian Internet users for their part have taken possession of the Web by feeding in video satires of the Egyptian commentators, and by underscoring the fact that, if Egypt is really Misr umm al-dunya (mother of the world), then Algeria is the father. They call their rivals Egypchiens, replacing the last syllable with the French word for dog; or Misrail, a play on the Arab word for Egypt, misr, and the word Israel.

The Arab media is following developments with concern in some cases, some media makers being accused by their Egyptian colleagues of a bias toward Algeria. One commentator at Al Jazeera even received a death threat from colleagues that work for the many Egyptian satellite broadcasters.

As Algeria doesn't have a satellite station of its own, relying on a single state-run television channel tellingly nicknamed "the silent one", which has in its customary fashion reserved comment, the only retort to the Egyptians has taken place in the newspapers.

These have maintained a relatively even tone, however, with the exception of the Arab-language daily Al Shuruq, which has featured no-holds-barred critiques of Egypt's behaviour.

Although the Algerian government is determined in spite of the tremendous wave of criticism to maintain cordial relations with its Egyptian colleagues, it nevertheless leaves no doubt that it is quietly pursuing a politics aimed at undermining what is left of Egypt's leadership in the Arab world. The first field for action will be to demand the reform of the Arab League, a budget-devouring and patently ineffective organisation, which the Egyptians have dominated since its founding.

The second measure will be to back those members of the Egyptian opposition who take a critical view of their country's stranglehold on the Palestinians. However, in view of US and Saudi Arabian support for Mubarak's regime, Algeria will presumably face difficulties in playing these two cards.

* Jumlukiya, an invented hybrid of the Arab words for republic (jumhuriya) and monarchy (malikiya), refers to Arab republics in which the son succeeds the father as leader, as in Syria for example.

Hamid Skif is an Algerian journalist and writer. He now lives in Hamburg, Germany.

Turkish Football
Mirror of National Identity
With its dramatic ascent to the semifinals of the Euro 2008, the Turkish team has impressed the world of football. But how much potential does Turkish football really have? Amin Farzanefar in an interview with sports journalist and Turkey expert Tobias Schächter

The Integrative Power of Football
Those Who Score, Get to Pray to Allah
It appears as if Islam is always perceived only as a threat. Yet, when soccer players pray to Allah, it is a popularly acclaimed declaration of faith. Nonetheless, the football pitch still has a long way to go to becoming a multicultural paradise, says Claus Leggewie

END_OF_DOCUMENT_TOKEN_TO_BE_REPLACED
Social media
and networks
Subscribe to our
newsletter