"Forever is Now": Art in the Egyptian desert

A premiere after 4,500 years: in autumn 2021, Egypt hosted its first art exhibition against the backdrop of the Giza Pyramids. Various artists created large installations in the desert sand. By Nele Jensch 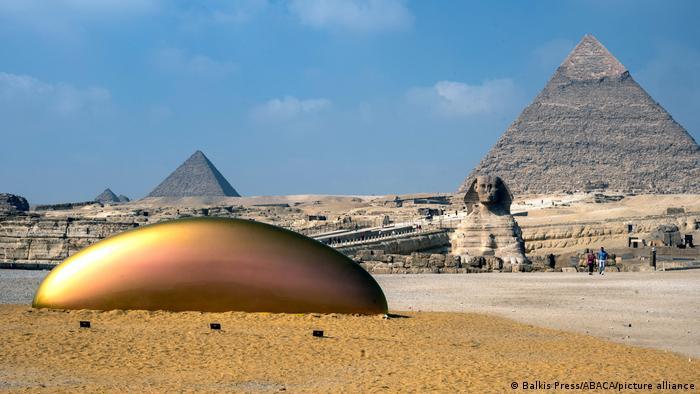 Golden memory: last autumn, for the first time ever, an art exhibition was organised in front of the 4,500-year-old Giza Pyramids, a UNESCO World Heritage Site. The work "Eternity Now" by American artist Gisela Colon was displayed next to the Sphinx: a 9-metre elliptical dome paid tribute to the historical legacy of ancient Egypt – as did the entire "Forever is Now" exhibition 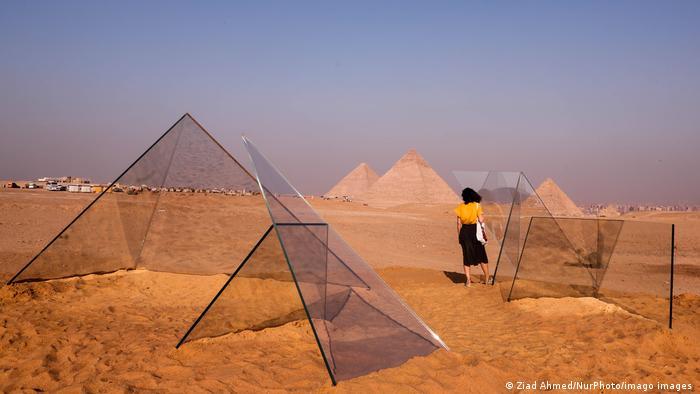 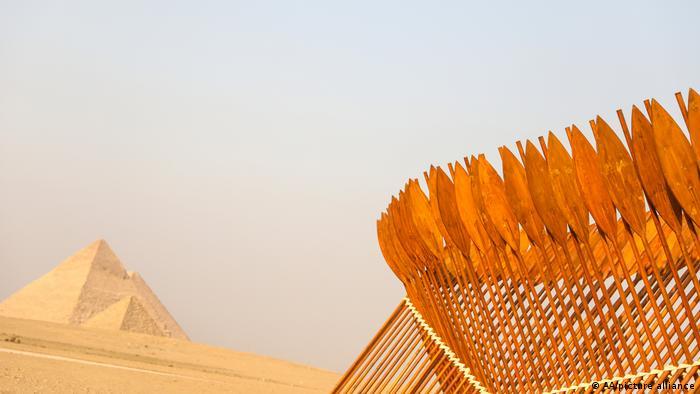 Inspired by sun barques: the installation "Bazarkh" by Egyptian artist Moataz Nasr, on the right of the photo above, is inspired by the sun barques – vessels that in ancient Egypt were supposed to transport the soul of a deceased pharaoh safely to the realm of the dead 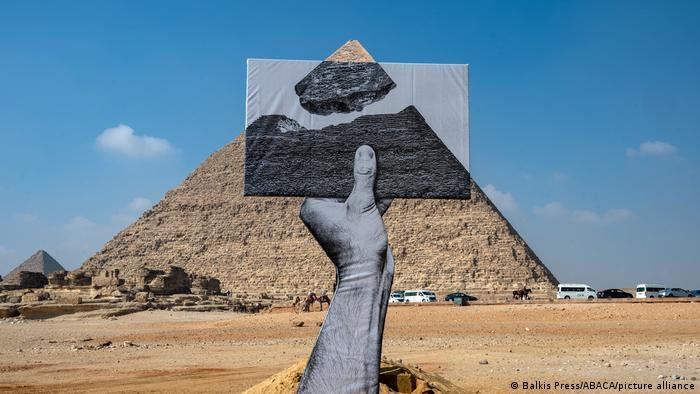 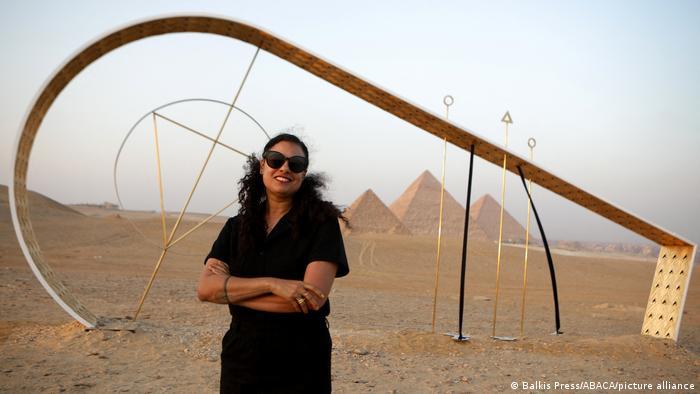 Tribute to Egyptian women: Los Angeles-based Egyptian artist Sherin Guirguis stands in front of her work, "Here I Have Returned". It is a tribute to the women who have supported and enriched Egyptian culture and society over time. The shape of the sculpture is inspired by the sistrum, a kind of framed rattle used by women belonging to the cult of Isis in ancient Egypt 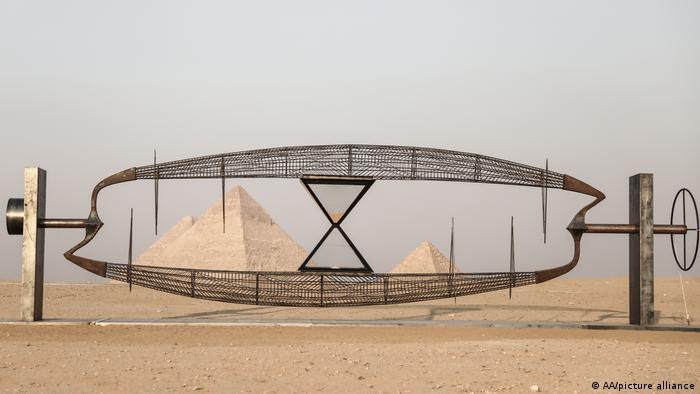 Circle of life: Alexander Ponomarev's artwork "Ouroboros" is made of steel, ceramic and glass. It depicts a variation of the ancient Greek image of a snake biting its own tail – a symbol for the circle of life 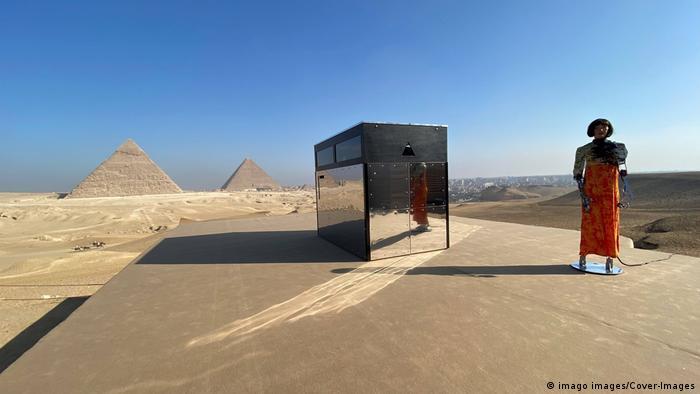 Robot behind bars: nor only can the robot woman Ai-Da talk, she can also paint, draw and even create installations. Her road to the exhibition was not without a hitch, however. When she entered the country, Ai-Da was "arrested" – the Egyptian security authorities thought she was a spying device. After efforts by the British Embassy, Ai-Da was finally released after 10 days 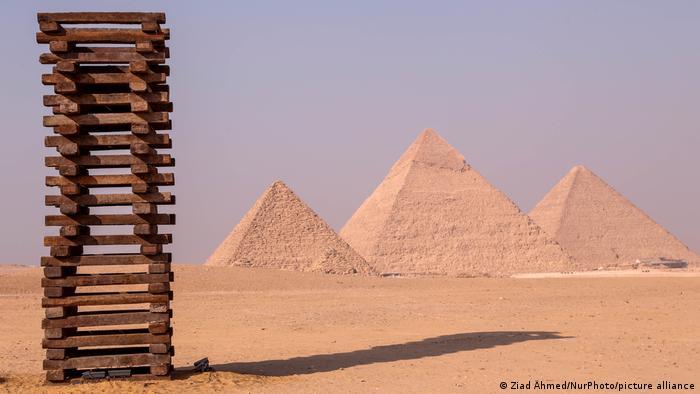 Upcycling: railway sleepers become art. The sculpture "Body That Rises" by Brazilian artist Joao Trevisan is somewhat reminiscent of an oversized Jenga game. Seven metres tall, it is composed of old Egyptian railway sleepers that were laid in the 19th century – Trevisan's aim was to incorporate Egypt's immediate past into his work 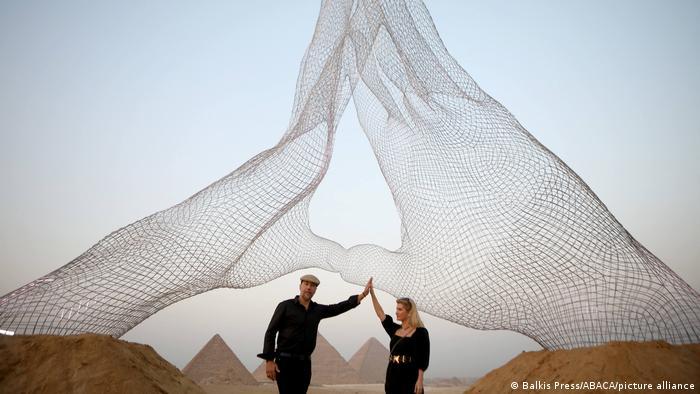 An historic event: Italian artist Lorenzo Quinn stands with his wife, Giovanna, under their sculpture "Together". "The reason I chose to create this work for this site is to honour the fact that society always works better and can surpass any obstacle when it works together," Quinn told reporters. He called the exhibition "an historic event"

END_OF_DOCUMENT_TOKEN_TO_BE_REPLACED
Social media
and networks
Subscribe to our
newsletter