Forming a Government in Iraq
Maliki's Disservice to Democracy

Iraq's incumbent Prime Minister Nuri al-Maliki is doing everything in his power to retain his position as head of government in Baghdad. The actual election victor, former Prime Minister Ayad Allawi, looks on in disbelief at the machinations of his rival. His chances of building a government are dwindling from day to day. In the meantime, terrorists are taking advantage of the power vacuum. Birgit Svensson reports from Baghdad 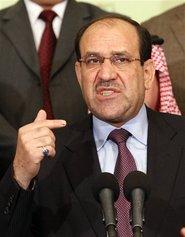 Hungry for power at all costs: Nuri al-Maliki, still serving Prime Minister, is currently pulling out all the stops to stay in office

​​The murderers ambushed him in front of his house in the Amil district of Mosul, the third largest city in Iraq. They fired numerous rounds of ammunition as he left his house. The wounds were fatal. Bashar Hamid al-Agaidi died in hospital shortly afterwards.

Unfortunately, shootings such as these are still an everyday occurrence in a country that has experienced a bloody regime change. Bomb attacks are again becoming more frequent. This murder, however, most dramatically reflects the current political situation in the land between the Euphrates and Tigris. Al-Agaidi was a newly elected member to the Iraqi parliament. He belonged to the Iraqiya list of Ayad Allawi, the winner of the parliamentary election held on 7 March.

The 43-year-old had to pay for this post-election struggle over power and influence with his life. The other 324 members of parliament may now be asking themselves who is next. Political observers in Baghdad all agree on one thing. This is the payback for the American decision to rely for so long on the military option while paying scant attention to the political process.

Urgent political problems in the northwest

Abdullah al-Juburi was shocked at the death of his colleague. The 57-year-old doctor also belongs to Allawi's list and was elected to parliament to represent Diyala Province, northeast of Baghdad. 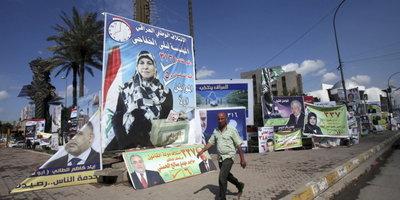 Election posters in Baghdad: It is improbable that both election victors will join forces to form a coalition government, although together they would enjoy a comfortable majority

​​"In Nineva, where Bashar came from, we are close to a political solution," says Juburi speculating on the reasons for the assassination. There, Allawi was far ahead of the Kurdish parties in winning the most votes. Iraq's most north-western province and its capital Mosul are part of a contested area, in which administrative control remains a matter of dispute. The oil producing city of Kirkuk, only 80 kilometres away from Mosul, serves as a symbol for the conflict.

The issue here is whether the region will fall under the jurisdiction of the autonomous Kurdistan Regional Government in Erbil or continue to be ruled by the central government in Baghdad. Since the new constitution came into effect four years ago, this has remained an unresolved problem, which should have been settled long ago.

Yet, even a solution to the most pressing immediate problem, namely finding a majority for a stable government in Baghdad, is also not in sight. For weeks now, an exhausting and relentless tug-of-war has been playing out with undiminished ferocity. Nuri al-Maliki, the still incumbent Prime Minister, has been pulling out all the stops in order to remain in power. Since it has become clear that he is not the undisputed victor of the parliamentary elections, he has been doing everything in his power to keep from vacating his post.

At first, he contested the results in court, demanding that the ballot papers for Baghdad be counted again. Then, elected members of parliament from the opposing party were disqualified because of their political background. And, finally, Maliki merged his State of Law Party, despite considerable differences of opinion, with the third-placed Shiite Alliance, thereby ensuring 159 of the 163 necessary votes to form a government.

The actual election victor, former Prime Minister Ayad Allawi, can only look on in disbelief at the machinations of his rival. His chances of building a government are dwindling from day to day.

Neck and neck race between Allawi and Maliki 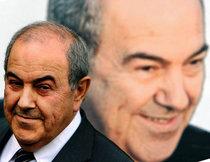 ​​When the first partial results were made public only a few days after the election, Maliki assumed he was certain of victory. The results certified his lead over his opponent Allawi. Bit by bit, the total results from Iraq's 18 provinces began to trickle in. They increasingly indicated a neck and neck race between Allawi and Maliki. When the preliminary official results were announced at the end of March, Allawi proved to be the narrow winner with two seats ahead of his rival. Yet, neither of the two has enough votes to govern alone.

Reports from national and international election observers did indicate questionable results in some election centres, such as Kirkuk and Baghdad, yet these possible falsifications remain under three percent of the total, which is an acceptable figure for a new democracy. Election observers are unanimous in view that this changes nothing in terms of the final results.

Yet, Maliki refused to accept the results and filed a complaint with the Supreme Court, which has the reputation of being positively inclined towards the government in its decisions. In a speech given in Kerbela at the end of April, the Shiite politician accused the international community of being responsible for the election results. He claimed they wanted to oust him in a putsch through voting manipulation. He accused his rival Allawi of "stealing votes." The court decided to allow a manual recount of votes in Baghdad. Maliki, however, came up empty-handed once again – the results remained the same.

Since then, the head of government has been bombarded with criticism. He has been reproached for trying to cling on to power at any price. His Kurdish government coalition partners are now openly speaking of dictatorial traits that the 59-year-old Shiite leader has developed during his past four years in office.

Parliament in Iraq: No majority for al-Maliki despite the clever merger of his State of Law Party with the Shiite Alliance

​​Even the leader of the Supreme Islamic Iraqi Council, the second largest group in the INA Shiite alliance with which Maliki's State of Law Party has merged in order to form the largest grouping in parliament, has not spared his criticism. In an interview with the state television broadcaster Al Iraqiya, Amar Al-Hakim remarked that whoever doubts the election results in order to gain one or two more mandates also casts doubt on the election commission and constitutional institutions.

Maliki has thrown into question the validity of the whole political process, Al-Hakim maintains. "When the votes on a proposal by an alliance have to be counted again by hand in Baghdad, then another alliance can demand a recount in Erbil, and then another in Anbar, Basra, or Najaf." For Hakim, this means that there is no basis for trust within the political alliances. "How can this alliance lead Iraq, when one alliance doubts the trustworthiness of another?" says the Shiite cleric in his black turban, summing up the political situation in Iraq.

Maliki, however, is still unsatisfied. A control panel has since expressed its reservations concerning six members of the newly elected parliament. Four of them are members of Allawi's list. The candidates have been accused of having links to the former Baath Party of the deposed dictator Saddam Hussein. During the election campaign alone, the Justice and Accountability Commission, the successor to the de-Baathification Commission set up by the American administration, disqualified over 500 candidates.

The courts retracted some of the disqualifications, however, and questioned the legitimacy of the institution. Now, all members of parliament will have to be checked for Baathist associations. If the disqualification of the four Iraqiya parliamentarians had been legally confirmed, then Allawi would have lost his majority. When the Supreme National Debaathification Commission was set up, Maliki served as one of its top administrators from 2003 to 2004. Since then, he is regarded as a Baathist hunter. Allawi, by contrast, received a large portion of his votes from former Baath Party members.

This is why it is difficult to imagine that the two opponents could ever form a government together, although such a coalition would enjoy a comfortable majority. Initial talks held last week between the two parties ended without any agreements.

War Crimes in Iraq
Shared Agony of Kurds and Shiites
Under Saddam Hussein, Kurds and Shiities were oppressed, systematically persecuted and murdered in large numbers. Iraq is now attempting to confront these dark chapters its recent history. Details from Baghdad provided by Birgit Svensson

END_OF_DOCUMENT_TOKEN_TO_BE_REPLACED
Social media
and networks
Subscribe to our
newsletter