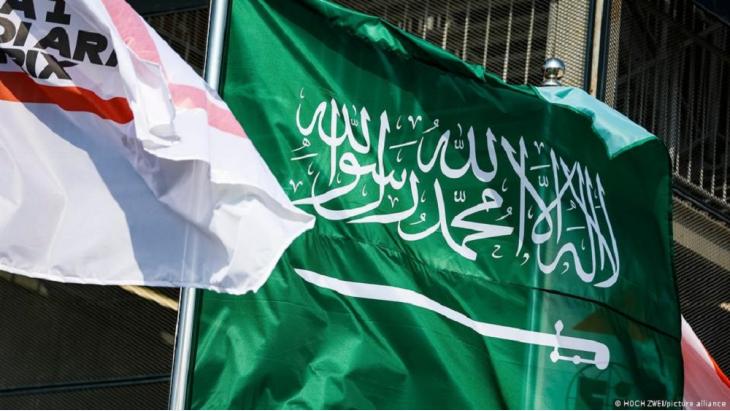 The Saudi Arabian Grand Prix raises questions as to how seriously Formula 1 really takes its commitment to respecting human rights. The criticism might be loud, but the financial incentives are irresistible. By Andreas Sten-Ziemons

"It is appalling," says Madawi al-Rasheed. "During a time when the whole world is focused on how to deal with authoritarian rulers who threaten peace, we find that sports corporations are not taking any notice of the human rights record of leadership such as that in Saudi Arabia." Originally from Saudi Arabia, the 59-year-old social anthropologist has long lived in London, where she is a visiting professor at the Middle East Centre of the London School of Economics.

In view of the human rights situation in the country and Saudi Arabia's involvement in the war in Yemen, she is just as critical of the Formula One race as she is of other major sporting events taking place in Saudi Arabia. "The solution is to boycott these kind of events and make any kind of Western assistance and support conditional on the Saudi regime abiding by international law and international human rights, values and norms." said Al-Rasheed.

Hundreds of millions for a positive image

Instead, the second race of the 2022 Formula 1 season took place as planned in Jeddah on Sunday, giving Mohammed bin Salman, who is a big F1 fan, a second opportunity to play the proud host of a Grand Prix. The controversial Saudi crown prince visibly enjoyed walking through the pit lane and starting grid at F1's premiere in the country last December, as he basked in the glory of the world's most prestigious racing series.  "It is part of his Vision 2030, whereby he wants to basically sports-wash the Saudi reputation," said Madawi Al-Rasheed. 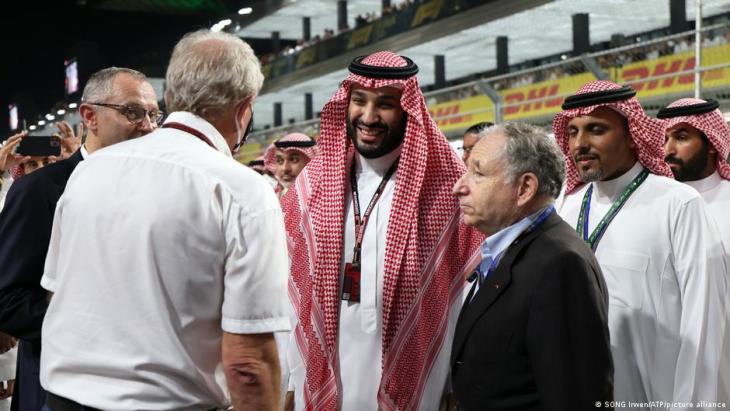 Jeddah 2022 – Grand Prix in the country of mass executions: human rights activists repeatedly complain about the high number of executions in Saudi Arabia. Last year, the human rights organisation Amnesty International said that after a decline during the country's G20 presidency, more people had been executed again. Between January and July 2021, 40 executions were carried out – compared with 27 the year before

With this second race, "the kingdom has now become the home of motorsports in the region," Sports Minister Prince Abdulaziz bin Turki Al-Faisal was quoted as saying by the Saudi newspaper Al Riyadh last week. In addition to Formula 1, the Dakar Rally has also been passing through the Saudi desert since 2020. Footballing highlights such as a friendly between Brazil and Argentina and the Spanish Supercup have also been held in the kingdom in recent years, as has a world heavyweight title boxing match. Most recently, the Saudi sovereign wealth fund PIF secured an 80% majority stake in Premier League club Newcastle United for around €350 million.

Saudi Arabia also opened its coffers for a Formula 1 bid, with state oil company Aramco striking a sponsorship deal with the racing series. Shortly thereafter, in January 2020, F1 organisers announced the creation of the Saudi Arabian Grand Prix. The Aramco deal is worth around €535 million over 10 years, according to a report published by Motorsportweek.com in April 2020. Some sources put the figure as high as €800 million. That's a lot of money for Formula 1, which, according to rights holder Liberty Media, recorded $1.15 billion in sales in 2020. But it's mere peanuts to Aramco, which according to Fortune magazine made $110 billion in profit last year. So, financially speaking, the partnership makes a lot of sense for F1.

From a purely economic point of view, at least, Formula 1 has landed in the right place. "Saudi Arabia is a very young market. There are a lot of big families, so there are a lot of young people," Christian Glosauer, economics expert for the Middle East at Germany Trade and Invest, explained. "It is also a classic car country. The car has a very high status there." While much is being done to improve public transportation in the country, Glosauer doesn't see this as a viable alternative at this point. "People in Saudi Arabia simply depend on and love their cars," he said. 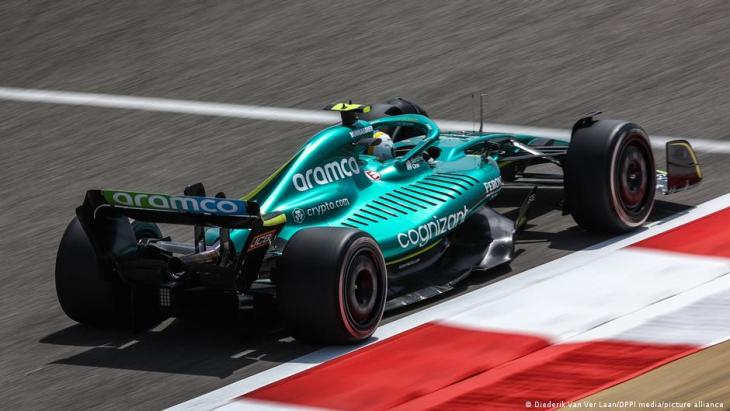 Money talks: Aramco has also become the main sponsor of Sebastian Vettel's Aston Martin team. The Aramco deal is worth around €535 million over 10 years, according to a report published by Motorsportweek.com in April 2020. Some sources put the figure as high as €800 million. That's a lot of money for Formula 1, but it's mere peanuts to Aramco, which according to "Fortune" magazine made $110 billion in profit last year

At the same time, the oil country Saudi Arabia is also a suitable partner when it comes to sustainability – which Formula 1 is committed to promoting. "There are big plans for renewable energies that are already being implemented," explains Glosauer. "Above all, it's about photovoltaics on a very large scale and green hydrogen, and there are also some projects for large solar parks."

No freedom of expression, thousands of civilian casualties in Yemen

The obvious financial benefit of the deal is one thing, the human rights situation in the country is another. The desert state is under authoritarian rule by the Saudi royal family. There are no elections, and any expression of opposition is severely punished. The case of blogger Raif Badawi, freed earlier this month after a decade in prison, is just one prominent example among many. Reporters Without Borders places Saudi Arabia at 170 out of 180 countries on its press freedom ranking. "Despite all the rhetoric of reform," it says, "repression has intensified since the appointment of Crown Prince Mohammed bin Salman in 2017. Many media professionals are arbitrarily imprisoned, most are likely tortured".

Human Rights Watch (HRW) has criticised the "continuing repression of dissidents and activists and the failure to provide accountability for the murder of Saudi journalist Jamal Khashoggi by Saudi agents in October 2018." That's not to mention the high number of state executions, some of which are even carried out in public. While there have been laudable reforms for Saudi women, which HRW said would amount to a significant step forward when fully implemented, it also noted that women's rights activists "remained in prison or on trial for their activism". 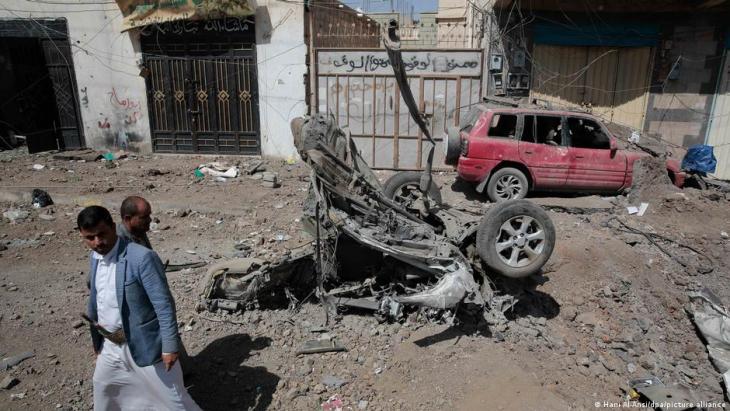 Saudi Arabia supports the government's side against the Houthi rebels in the Yemen war: "The armed conflict in Yemen since 2015 between the Saudi and UAE-led coalition and the Houthi armed group has resulted in numerous abuses that have killed and injured thousands of civilians. The coalition has conducted scores of unlawfully indiscriminate and disproportionate airstrikes against civilians and civilian structures", reports Human Rights Watch

It should also not be forgotten that Saudi Arabia has been waging a bloody proxy war in neighbouring Yemen since 2015, which has claimed more than 10,000 civilian lives, about a quarter of them children, according to the aid organisation Save the Children. In addition, almost 400,000 girls and boys under the age of five suffer from acute malnutrition.

'Alarming news' no reason for cancellation

None of this has stopped Formula 1 organisers from including Saudi Arabia in its Grand Prix series. Not only that; starting in 2023, the kingdom is to host a second annual race. Formula 1 has issued a declaration of commitment to respect human rights. Among other things, it says it will "engage in meaningful consultation with relevant stakeholders in relation to any issues raised as a result of our due diligence, where appropriate." Requests for comment on how F1 and motor sports' world governing body FIA go about raising human rights issues with their Saudi partners went unanswered.

Before the race in Jeddah, however, Formula 1 Managing Director Stefano Domenicali spoke out on Sky Sports. While he described the recent news of 81 people being executed in a single day in Saudi Arabia as "quite alarming", he also said he saw no reason to cancel the race. On the contrary, he argued, Formula 1 helps give the issue "a different prominence in the news", which shines "an intense spotlight" on the abuses.

This coincides with the Saudi view. Sports Minister Al-Faisal admitted in a recent interview with Al Riyadh that there is still much to be done on the issue of human rights. At the same time, hosting major events like Formula 1 is important "to make our society more inclusive and diverse and to promote equality". Criticism is welcome, he said, if it also acknowledges the change and great development the Kingdom is experiencing in general and in sport in particular.

When Vladimir Putin's Russian forces invaded Ukraine last month, it wasn't long before F1 cancelled the Sochi Grand Prix, which had been scheduled for September. However, it seems that neither Saudi Arabia's human rights record, nor the alleged war crimes being committed in Yemen with Saudi support, are enough to prod F1 to act.

Last Wednesday, 90 members of the European Parliament accused FIA and Formula 1 of actively promoting sports washing and displaying a "strong double standard". But this is unlikely to have a drastic effect; after all, Formula 1 has been perfectly at ease with this double standard for many years.

Many Turks are dissatisfied with the international status of their country. At the same time, opinion polls reveal great scepticism among the Turkish population towards the USA. ... END_OF_DOCUMENT_TOKEN_TO_BE_REPLACED

Very different Western reactions to the suffering in Ukraine and the Arab world show that there is a profound rift among cultures. Essay by Michael Young END_OF_DOCUMENT_TOKEN_TO_BE_REPLACED

Since Spain abandoned its traditional neutrality towards the conflict in Western Sahara, Morocco has announced a "new phase" in relations between the two countries. But what is ... END_OF_DOCUMENT_TOKEN_TO_BE_REPLACED

Tunisia's president has been carrying out a coup by degrees, demolishing the country's hard-fought democratic gains bit by bit. With an economy in turmoil and a splintered ... END_OF_DOCUMENT_TOKEN_TO_BE_REPLACED

From the Euphrates to the Mekong, dams that ensure one country's water supply risk leaving others parched. But shared water resources can be a source of peace as well as conflict ... END_OF_DOCUMENT_TOKEN_TO_BE_REPLACED

Middle Eastern countries are still on the fence when it comes to the Russian invasion of Ukraine. Their citizens point to the West's double standards surrounding conflict and ... END_OF_DOCUMENT_TOKEN_TO_BE_REPLACED
Author:
Andreas Sten-Ziemons
Date:
Mail:
Send via mail

END_OF_DOCUMENT_TOKEN_TO_BE_REPLACED
Social media
and networks
Subscribe to our
newsletter