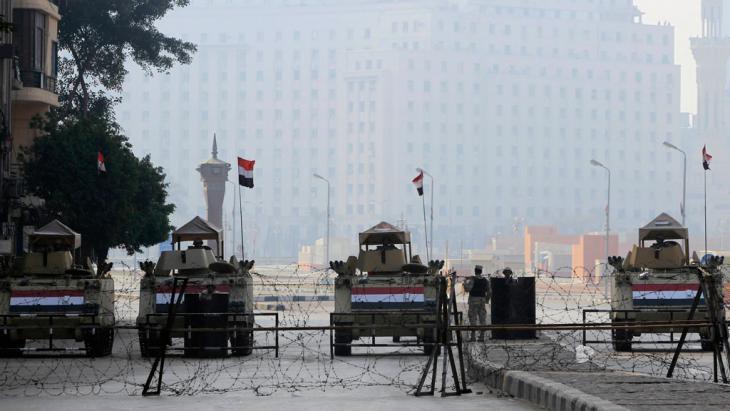 On the first anniversary of Egypt's January revolution, there was a huge festival on Cairo's central Tahrir Square. On the fourth anniversary, demonstrations were banned and the square blocked off by the army. By Karim El-Gawhary in Cairo

Revolution anniversaries are always a good indicator of where a post-revolution country stands politically. In Egypt, this historical milestone is celebrated every year on 25 January – the date on which the uprising against the Mubarak regime began in 2011.

Yet unlike the past three anniversaries, Tahrir Square remained windswept and empty this year. Anyone approaching it risked arrest. The military had simply cordoned off the symbolic site and announced a general ban on demonstrations.

The case of Tahrir activist Shaima El-Sabbagh demonstrated how seriously this ban should be taken. El-Sabbagh was shot dead on the eve of the anniversary, only a few hundred metres away from the square. She and several dozen members of a small socialist party had intended to take flowers and wreaths to Tahrir Square to commemorate the 840 people killed during the uprising against Mubarak. After a matter of minutes, the small group was targeted by the police with tear gas and shotguns. According to the coroner's report, Shaima's heart and lungs were ripped apart by shot.

As if that wasn't enough, the 17-year-old Sondos Reda Abu Bakr had also been shot dead by police at a Muslim Brotherhood anti-coup march the previous day. On the day of the anniversary itself, there were brutal clashes between the police and followers of the Muslim Brotherhood, mainly in Cairo's poor Matariya district. Twenty people died. "Four years after the revolution, the police are still regularly killing demonstrators," concludes Sarah Leah Whitson from Human Rights Watch. 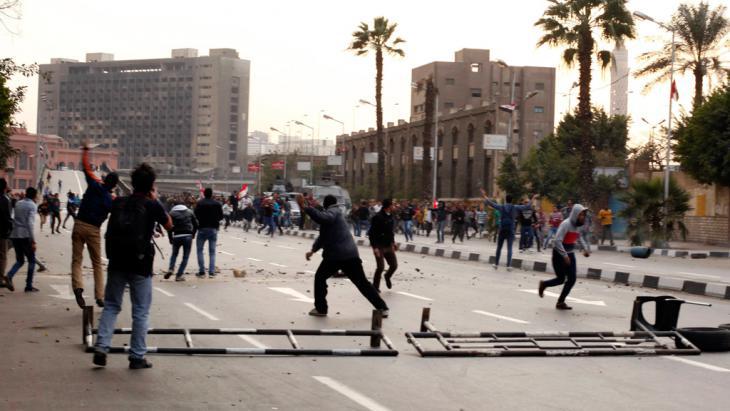 Protests near Tahrir Square on 25 January 2015. Speechless anger four years after the Arab Spring: a total of 18 people were killed in violent clashes on the fourth anniversary of the revolution in Egypt, including three police officers. At least 82 others were injured

The most conspicuous thing, however, was the empty streets in Egypt's 20-million-inhabitant capital on the fourth anniversary of the uprising. Most people stayed at home – either out of fear or out of indifference towards the regime and its opponents.

On the first anniversary after Mubarak was removed from office, Tahrir Square had been one big party zone. Hundreds of thousands of Egyptians gathered there, vowing to defend the revolution's achievements, even though the Supreme Council of the Armed Forces was already pulling the strings.

That year's rally on Tahrir Square was organised in the form of a gigantic march converging from 25 starting points. Even by the afternoon, not all of the demonstrators had arrived at the square. Despite chants against the Supreme Council, the atmosphere was one of a peaceful street party, bringing together old and young, men and women, poor and wealthy. Not a single police officer was to be seen anywhere around the capital's main square.

A year later, there was another large demonstration on Tahrir Square, but this time, the atmosphere was tense. Mohammed Morsi of the Muslim Brotherhood had taken office as president and there were violent clashes across the country. Muslim Brotherhood offices were attacked, usually by masked young men, and young people fought street battles with the police outside the Interior Ministry. It was a day of dissatisfaction on all sides. When it was over, people were concerned that the revolution might end in chaos after all.

The triumphant march of the roaring lion 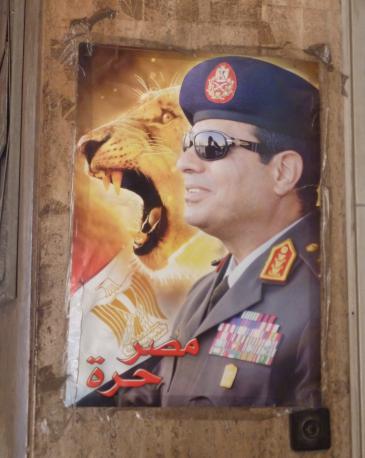 General, pharaoh and lion: since Sisi took office, the Egyptian military has become even more powerful. Freedom of speech and assembly has been drastically restricted. Many of the former revolutionary activists from the popular April 6 Youth Movement are also now in prison

On the third anniversary, supporters of the then military chief and president-to-be, Abdul Fattah al-Sisi, organised a huge, enthusiastic victory celebration on Tahrir Square, holding up posters showing the general alongside the head of a lion. They were demonstrating in support of a man who had swept Morsi out of office six months previously by means of a military coup with widespread public backing.

"I'm going to stay on the square until he stands for office," one of the demonstrators announced at the time. A large banner depicted Sisi with a butcher's knife, beneath him the militarily deposed ex-president Mohammed Morsi as a sheep, with a number of other leading members of the Muslim Brotherhood. "Execute the Muslim Brothers!" and "Sisi is my president!" the crowd chanted at high volume. A police officer stood on a stage on Tahrir Square and sang the national anthem to thousands of flag-waving Egyptians on the revolutionary anniversary.

This was the official re-writing of the Egyptian revolution's history. The Interior Ministry, which was responsible for the high number of victims during the 18-day uprising against Mubarak, with some 840 killed, was not only rehabilitated but was now also claiming the revolution for itself – the height of absurdity.

Yet another part of Egypt continued to demonstrate against the regime on that day. "What's just happened on Tahrir Square, that they're creating a new pharaoh, is really the last thing our country needs," said the activist Khaled Daoud at a demonstration outside the Journalists' Association that was broken up by the police shortly afterwards. A young Tahrir activist by the name of El-Sayed Wezza, who had demonstrated alongside him, was shot dead that day. 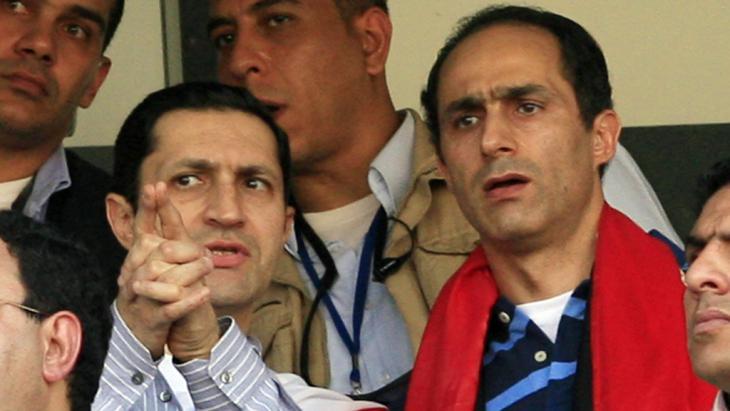 Out of prison: the deposed Egyptian president Hosni Mubarak's two sons, Alaa (l.) and Gamal Mubarak, were released on Monday, according to justice officials, even though a corruption case is still pending against them. A court ruled last month that the two men had already spent the maximum permissible period of 18 months in pre-trial detention

A few months previously, he had collected signatures in support of the Tamarod protest movement, calling on the then President Morsi to hold early elections. Now Wezza wanted to demonstrate against the military leadership, which had used the Tamarod movement to justify its coup. He paid for his dissent with his life.

Yet it was above all the numerous counter-demonstrators from the Muslim Brotherhood who suffered the greatest losses on that day last year. A total of 49 people died, most of them from Cairo's Alf Maskin and Matariya slums, regarded as strongholds of the Muslim Brotherhood. More demonstrators were arrested on the third anniversary of the revolution than on the first day of the anti-Mubarak protest itself – while police officers intoned the national anthem on Tahrir Square.

Four years after the revolution, little remains of the former spirit of freedom, aside from the few people like Shaima, who still have the courage to take to the streets for that spirit.

A further indicator of the state of the nation is that on the morning after the fourth anniversary of the overthrow of the long-term dictator Hosni Mubarak, his sons Gamal and Alaa Mubarak, once charged with corruption, were released from prison in Cairo.

Political analyst Taqadum al-Khatib argues that Egypt can, in co-ordination with its European partners, develop a common vision to solve the complex conflict in Libya. For this to ... END_OF_DOCUMENT_TOKEN_TO_BE_REPLACED

The upheavals of the past year in the MENA region are arguably as momentous as those of the Arab Spring in 2011. Yet perhaps the biggest difference is that our interest seems to ... END_OF_DOCUMENT_TOKEN_TO_BE_REPLACED

In 2019, the long-running Penguin Classics series released its first novel translated from Arabic: Tawfiq al-Hakim’s "Return of the Spirit", conveyed into English by William ... END_OF_DOCUMENT_TOKEN_TO_BE_REPLACED

Equality in divorce, a ban on polygamy: reformers of Islamic family law have a clear agenda. They are exploiting the ambiguity of traditional jurisprudence. By Joseph Croitoru END_OF_DOCUMENT_TOKEN_TO_BE_REPLACED

Decades of oil exports have completely destabilised culture and politics in the Middle East. Speaking with Lena Bopp, the renowned writer Amin Maalouf says that the distorted ... END_OF_DOCUMENT_TOKEN_TO_BE_REPLACED