Four years have passed since Lebanon's former prime minister Rafik Hariri was killed in a car bomb attack. Syria's secret service is suspected of involvement, but to this day, no-one can say with any certainty who was really behind Hariri's assassination. Birgit Kaspar reports

Beirut, 14 February 2009: hundreds of thousands pay tribute to the former Lebanese prime minister Rafik Hariri on the fourth anniversary of his assassination

​​ Rafik Hariri wanted to go down in history as "Mr Lebanon" and he undoubtedly has. On 14 February 2005, Lebanon's charismatic former prime minister was killed at the age of 60 in a car bomb attack while driving from the parliament in Beirut to his villa in the district of Qoreitem.

The assassination sent shockwaves around the world because although born into a simple farming family in the southern Lebanese city of Sidon, Hariri's ambition and business sense made him a multi-billionaire with high-ranking friends around the world. Like no other, Hariri stood for the reconstruction of his civil war-torn native country.

The trail leads to Damascus

No-one knows who killed Hariri. Nicholas Blanford, author of the book Killing Mr. Lebanon, recalls that at the time of the murder, 99.9 per cent of the Lebanese believed that Syria was behind the assassination. "This is still the case. Nevertheless, four years after the fact, we are still waiting to find out whether there is any proof to back up this belief."

After all, since voicing the suspicion that Damascus was involved in the assassination, the International Independent Investigation Commission (IIIC) is now conspicuously holding its fire. On 1 March, the commission will give way to a Special Tribunal for Lebanon in The Hague. Nevertheless, no immediate charges are expected to be brought.

From head of company to head of state

​​ After taking a degree in business studies in Beirut, the ambitious young Hariri went to Saudi Arabia where he quickly gained a foothold in the construction industry. With this undertaking, he laid the foundation for his billion-dollar fortune. Both this wealth and his close links to the Saudi royal family would later help him in his political career. When the Lebanese civil war ended in 1990, Hariri returned to his native country to realise his personal dream of reconstructing his battered homeland and, in particular, the nation's capital, Beirut.

Blanford says that it wasn't only the Lebanese who found it difficult to resist the jovial Hariri. "His style was that of a steamroller; he was larger than life. He was a man of endless ambition  both economically and politically." 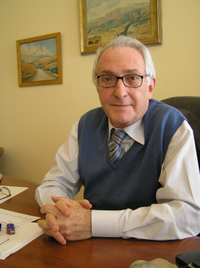 ​​ Hariri was made prime minister of Lebanon for the first time in 1992 under Syria's internationally recognised protectorship. He ran the country as he ran his company: by establishing additional institutions, he created a kind of parallel government that made it easier for him to push through his projects.

Georges Corm, economist and former Lebanese finance minister, accused him of ruling the country in a dictatorial style. He considers it scandalous that Hariri was allowed to burden the nation with crippling debts, which now amount to over 170 per cent of the country's gross national product. Says Corm:

"Hariri pumped billions into the reconstruction of the country, yet 18 years after the end of the civil war, the Lebanese still do not have power 24 hours a day." Nevertheless, he says, the myth of Hariri's amazing reconstruction programme remains untarnished.

"Corrupt in a Saudi kind of way"

Hariri had banked on the establishment of a widespread peace in the Middle East that would lead to an economic upswing, making it possible for Beirut to repay its debts. But the desired peace did not come about. Although downtown Beirut has been elegantly rebuilt, ordinary Lebanese citizens cannot afford to pay the high rents being asked in that part of town.

Although Damascus has always denied being behind the murder, Syria withdrew its troops from Lebanon in April 2005 after almost 30 years following growing international pressure

​​ That being said, Blanford feels that during his two periods in office (199298 and 200004), Hariri succeeded in improving Lebanon's image on the international stage.

Moreover, it was his personal reputation that made it possible for him to mobilise generous financial aid from abroad. The downside to the enormous flow of cash was, however, corruption, which reached new heights in Lebanon. Blanford points out that it was less a case of Hariri lining his own pockets: "He was corrupt in a Saudi kind of way. In other words, he used money to make things happen. If you have a problem, you keep throwing money at it until it disappears."

His luck began to change in 2004 when he tried to block an extension of the pro-Syrian president Emile Lahoud's term in office. Hariri, who described himself as a friend of Syria and acknowledged Syria's interests in Lebanon, was roundly rebuffed by Syria's President Bashar Al-Assad.

Says Blanford: "Hariri was objecting to the fact that his own political and economic projects were being blocked, especially by Damascus-backed pro-Syrian elements in Lebanon." One of these elements was Lahoud.

Blanford considers it possible that the Syrians believed whisperings in Lebanon that Hariri was a threat to Damascus. "Based on my extensive research, I believe that a tragic misunderstanding could have led to Hariri's death."

Interview with Georges Corm
Double Standards
Georges Corm is convinced that as long as the West pursues double moral standards and applies international law unequally, its attempts to establish dialogue with the Islamic world cannot be taken seriously. Mona Sarkis spoke to the social scientist and former Lebanese Finance Minister

Civil Society in Lebanon
Sensitive Political Issues Are Avoided
After the killing of former Prime Minister Rafik al-Hariri, thousands took to the street to protest. In Beirut, Bernhard Hillenkamp interviewed social economist Omar Traboulsi about the prospects of civil society in the midst of political turmoil

Interview with Hussam Itani
Trying to Find a Common Denominator
After the murder of Rafik al-Hariri in February 2005 the old coalition between the fractions al-Hariri, Walid Jumblat, and Syria broke down. Mona Sarkis interviewed Hussam Itani, a columnist for the Lebanese newspaper As-Safir, about the new alliances

END_OF_DOCUMENT_TOKEN_TO_BE_REPLACED
Social media
and networks
Subscribe to our
newsletter