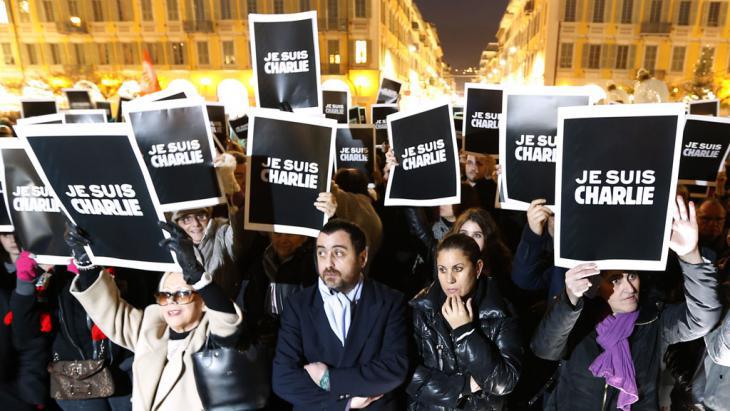 After the murderous attack on "Charlie Hebdo", will the French succeed in joining hands with the country's Muslim minority to confront the Islamist movement at home, or will Muslims once again be made the scapegoat. By Birgit Kaspar

France is holding its breath, and not just during a minute's silence a day after the attack on the offices of the satirical magazine "Charlie Hebdo" in Paris, which left 12 people dead and another 11 injured. Society as a whole is deeply shocked by the most serious attack on French soil for more than 40 years.

There is an atmosphere of solidarity, indignation and fear – fear not least of the potential long-term consequences of the murder of journalists who saw themselves as the vanguard of press freedom in France and whose suspected killers are thought to be from the jihadist, radical-Islamist milieu.

The French knew of the threat they faced from radical Islamists. Loic Garnier, head of France's national anti-terrorism co-ordination unit (UCLAT), recently warned that the question was not whether there will be an Islamist attack in France, but when.

Editors at "Charlie Hebdo" also knew that they were on the Islamists' list of targets. In 2006, the French satirical magazine republished all the controversial Muhammad cartoons from the Danish newspaper "Jyllands-Posten" together with a few of its own. The magazine's director, Charb (Stephane Charbonnier to give him his full name), who was killed in Wednesday's attack, justified the re-publication of the Danish cartoons as a gesture of support for press freedom. He also emphasised that "Charlie Hebdo" by no means specialised in attacks on Islam. However, he added at the time, if it was deemed necessary, he and his colleagues would not shy away from it.

The editorial offices of the magazine have been under police protection since November 2011, following a firebomb attack that came after the publication of a special edition titled "Sharia Hebdo". The title page of the issue showed a caricature of the Prophet Muhammad, ironically cast as guest editor-in-chief of the issue, saying: "A thousand lashes if you don't die laughing."

No one was injured in the arson  attack. The magazine published further Muhammad caricatures in 2012 and 2013. These were also greeted with repeated threats from Islamist circles. But the threats had become less noticeable in recent months, which made the fatal attack on the journalists all the more shocking, the magazine's editor-in-chief Gerard Biard told "Le Monde".

On the evening after the attack, tens of thousands of French people took to the streets, united in their disgust at the brutality of the crime and determined to stand up for their values of press freedom and democracy. President Francois Hollande called for national unity and declared a day of national mourning – a rare move in recent French history. 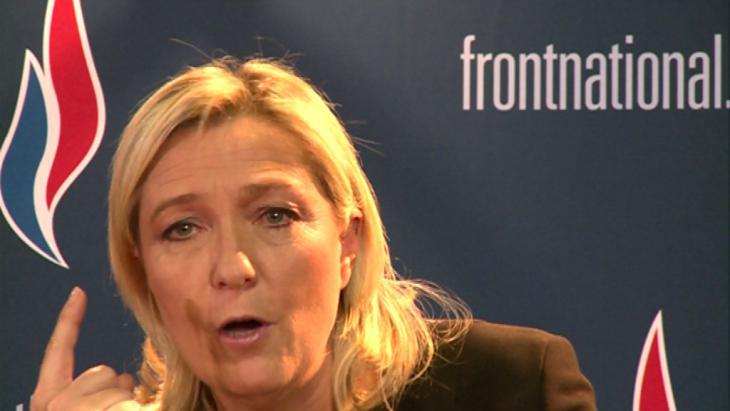 Grist to the mill of the extreme right in France: Marine Le Pen "said that France must immediately regard itself as being at war with Islamic fundamentalism. Political observers are already warning that the Front National could benefit from the fallout of the attack against 'Charlie Hebdo' in the medium term," writes Birgit Kaspar

Struck in the heart

France had been struck in its very heart, said Hollande. It was a phrase taken up by politicians of every hue, and a sentiment with which many of the protesters on the streets of Paris, Toulouse, Lyon and Marseille could identify.

Marine Le Pen, head of the ultra-right Front National, went a step further. She said that France must immediately regard itself as being at war with Islamic fundamentalism. Political observers are already warning that the Front National could benefit from the fallout of the attack against "Charlie Hebdo" in the medium term.

Official representatives of France's Muslim community were also swift to condemn the attack unreservedly. Representatives of various Islamic organisations gathered at the Grand Mosque in Paris upon the invitation of the French Council of the Muslim Faith (CFCM).

In a joint declaration, they called on all imams in France to issue an unequivocal denunciation of violence and terrorism during mosque services. They also called on French Muslims to take part en masse in the national rally scheduled to be held at the weekend "to throw weight behind their desire for peaceful coexistence and their respect for the values of the republic."

"A psychopathic vision of Islam"

Dalil Boubakeur, the President of the CFCM, had previously denounced the attackers' "totally misguided, morbid and psychopathic vision of Islam". The imam at the mosque in Drancy, Hassen Chalgoumi, known for his commitment to peaceful interfaith dialogue in France, also emphasised: "The assailants' barbarism has nothing to do with Islam."

There is a tangible fear among French Muslims that despite the omnipresent calls for national unity, they will ultimately be the victims of an intensified version of an already widespread Islamophobia. There are already initial reports of attacks on a number of mosques in France. The president of the International League against Racism and Anti-Semitism, Alain Jakubowicz expressed what many people are thinking: "The fear is great that Islam will once again be seen as the root of this monstrosity."

Everyone is still talking about national unity – including those Muslims who share the values of the republic, among them freedom of the press and freedom of expression. But this could change as soon as the first big wave of emotion begins to ebb, a possibility cautiously raised by regular Muslims on the Internet. 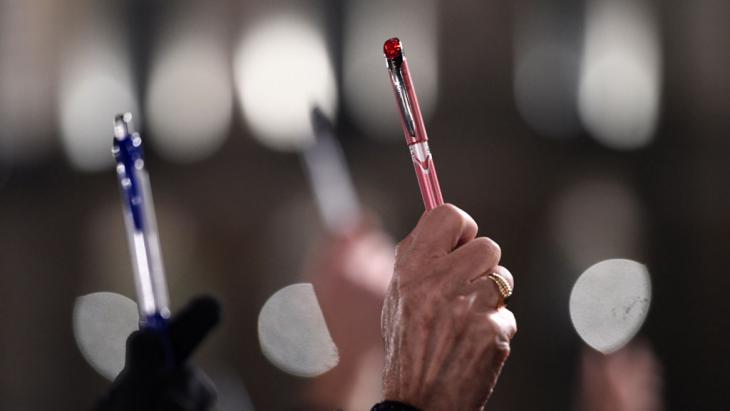 "Everyone is still talking about national unity – including those Muslims who share the values of the republic, among them freedom of the press and freedom of expression. But this could change as soon as the first big wave of emotion begins to ebb," writes Birgit Kaspar

On the Facebook page "Pas en mon nom" (Not in My Name), 17-year-old Ikram, who is of Algerian heritage, emphasised: "Their Islam [i.e. the Islam of the attackers] is neither mine, nor that of thousands of other Muslims who experience Islamophobic attacks directly or indirectly every day." She went on to quote Voltaire: "I do not agree with what you have to say, but I will defend to the death your right to say it."

A newly-created Facebook page called "Musulmans nous soutenons Charlie Hebdo" (Muslims, we support "Charlie Hebdo") has so far been given a cautious reception. AmineK tweeted: "Before it's even happened, I am already pained by the stigmatisation that will be aimed at those who have nothing at all to do with this act."

As well as genuine indignation at the bloodshed, a sense of public unease appears to be taking hold. Few French people and still fewer French Muslims dare to criticise the satirisation of Islam featured in "Charlie Hebdo". Solidarity with the victims of the attack and the fight to preserve press freedom are top of the agenda.

But now as in the coming weeks, this is about much more than press freedom. It will also be a question of whether the French will succeed in joining hands with the country's Muslim population of almost five million to confront the Islamic jihadist movement at home or whether, when all is said and done, the Muslims and their religion will once again be made the scapegoat, whether they will again be placed under general suspicion where there is any case of doubt.

"Charlie Hebdo" didn't make everyone laugh; in fact, it couldn't even make some people smile. But in the Western understanding of democracy, censorship can and must not be tolerated. At some point down the line, however, one should ask whether satire should be required to shoulder a certain amount of the responsibility for its impact in a socio-political climate that is already characterised by a certain degree of Islamophobia. This is evidently less difficult in other equally sensitive religious contexts.

Speaking with tears in her eyes, one demonstrator in Paris with Algerian-Tunisian roots said she was deeply worried for this country. This is a sentiment echoed by many French people today, and not primarily because they believe that press freedom is under threat.

Home
Print
Newsletter
More on this topic
Attack on the French satirical magazine "Charlie Hebdo": Do not be deceived!Reactions to the "Charlie Hebdo" attack in the Arab world: "Radicals killed radicals"French reactions to IS terror: "What next? Will we ask Muslims to kneel?"
Related Topics
Cartoons, Charlie Hebdo, Democracy and civil society, Freedom of the press, Front National, International terrorism, Jihadism | Jihadists, Muslims in the West, Satire
All Topics

Much has changed in the European post-fascist firmament since former SS officers, veterans of the collaborationist Vichy government and other dubious figures established the ... END_OF_DOCUMENT_TOKEN_TO_BE_REPLACED

One year ago the Taliban returned to power, seizing Kabul; the U.S. and its allies made a panicked exit from the country. Of all the books written on the subject, four stand out ... END_OF_DOCUMENT_TOKEN_TO_BE_REPLACED

In "Iran. Die Freiheit ist weiblich", journalist Golineh Atai describes the dogged resistance of courageous Iranian women against the Islamic Republic and the mullahs who have ... END_OF_DOCUMENT_TOKEN_TO_BE_REPLACED

Unflattering terms were used at a German Football Association human rights congress aimed at "intensifying the discussion" ahead of the World Cup. One speaker in particular made ... END_OF_DOCUMENT_TOKEN_TO_BE_REPLACED

Egyptian authorities have Mada Masr in their sights once again after critical reporting. But the editor of the country's last independent news source is adamant they will continue ... END_OF_DOCUMENT_TOKEN_TO_BE_REPLACED
Author:
Birgit Kaspar
Date:
Mail:
Send via mail

END_OF_DOCUMENT_TOKEN_TO_BE_REPLACED
Social media
and networks
Subscribe to our
newsletter