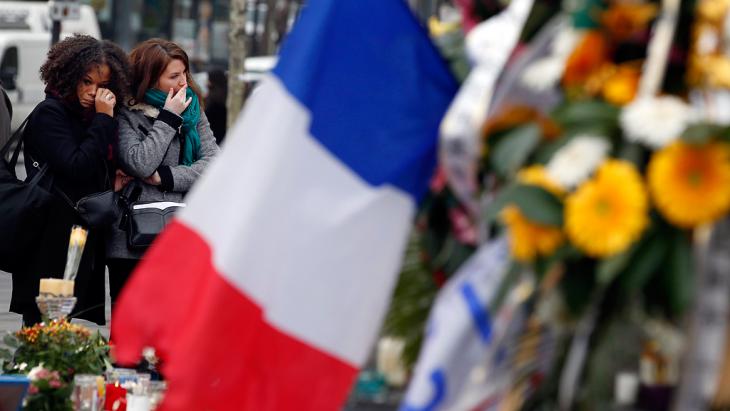 France after the attacks

Of Islam, champagne and bombs

The situation in France continues to be tense following the latest attacks in Paris. But instead of solving the problems at home, the focus is solely on Syria. Details from Emran Feroz

2015 was a bloody year for France. First came the attacks on the editorial offices of "Charlie Hebdo", followed a short time later by the violent hostage-taking in a Jewish supermarket and now, some 10 months later, the massacre in Paris that left 130 dead. French society is gripped by a state of emergency.

But this society is made up of a great variety of classes and confessions – and they are all suffering under the current circumstances, some more, some less. It is, however, the Muslim citizens of this country who are most affected. And because, thus far in France, only young men with a Muslim background have been blamed for the attacks, the some five million other Muslims again find themselves scapegoated.

Just a few days after the attack on "Charlie Hebdo", the monitoring agency "Collectif contre l'Islamophobie en France" (Collective Against Islamophobia in France) or CCIF, reported at least 116 Islamophobic incidents across France – more than during the whole of 2014.

The list of incidents was long: from attacks on women wearing veils through to explosive devices targeting mosques. There were a total of 222 similar incidents during the first three months of this year. That is an increase of 500 per cent on the same period last year. In this context it should be mentioned that numerous other attacks probably remain undocumented, as many of those affected do not officially report them. 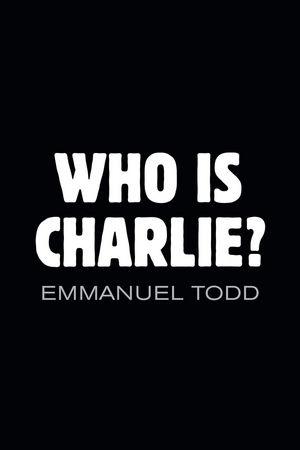 In his book "Who is Charlie? Xenophobia and the New Middle Class", the French historian and sociologist Emmanuel Todd openly criticises France's secular state, accusing it of "institutional Islamophobia". Todd emphasises that although secularism is important, radical laicism must be banished

In the wake of the attack on "Charlie Hebdo", the tenor of many French commentators and politicians was unequivocal: the extremists had attacked one of the bedrock principles of the state – freedom of expression. And somehow all the other Muslims who also couldn't bear to see cartoons of their Prophet have something to do with it. Scenarios such as the one portrayed in the novel "Submission" by the writer Michel Houellebecq, in which the Muslims of France suddenly come to power and "Islamise" the nation, were rolled out overnight.

France has had a difficult relationship with religion ever since the days of the Revolution. Over the course of time, this has led among other things to the principle of laicism asserting itself in all institutions. But contrary to the original concept, this laicism in the "land of equality" deals with citizens on a selective basis. For example, studies by renowned universities such as Stanford and the Sorbonne make it clear that unlike Christians, it is primarily Muslims who feel the effects of French-secular legislation.

The French historian and sociologist Emmanuel Todd has made particularly concrete assertions in this regard. Shortly after the attacks on "Charlie Hebdo", he sharply criticised the secular French state in his book "Who is Charlie? Xenophobia and the New Middle Class" – accusing it of "institutional Islamophobia". Todd emphasises that although secularism is important, radical laicism, which is primarily aimed at the nation's weak Muslim minority and which has in the meantime itself degenerated into a kind of substitute religion, must also be banished.

Todd's latest book also highlights other crucial factors. One of these is the state of the nation's youth, mostly made up of Muslim migrants, in the banlieues – the French suburbs, the scene of catastrophic social conditions that serve to stoke hatred and violence. The conditions in the suburbs and the systematic exclusion of Muslims in general also make it clear, he argues, just how far France has distanced itself from its self-imposed principle of equality – and why some young French nationals prefer to migrate to the so-called "Islamic State" (IS).

Todd places most of the blame for this at the door of what he calls a "zombie-Catholic middle class", which he describes as latently anti-Islam and anti-Arab and which he says now also includes many left-wingers and social democrats – among them French President Francois Hollande – who have long distanced themselves from previously-held values. 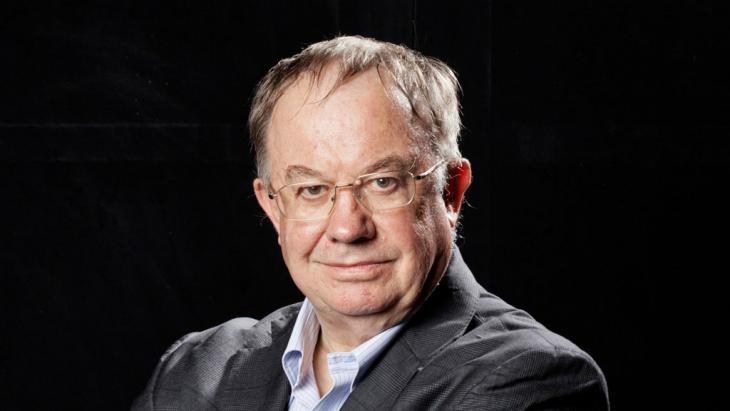 "Fighting IS will not end the radicalisation of youth in Europe," says the French political scientist Olivier Roy. Contrary to many polemical contributions to the debate, Roy emphasises that what we are currently dealing with is not an Islamic uprising, but a youth revolt

But after the latest attacks in Paris, no one has any time for Todd's views in France. "Who is Charlie?" caused an uproar and is still being regarded as though it is a work of blasphemy. For many French people who took part in the protest march on 11 January 2015, Todd – who has in any case come in for plenty of criticism in the past – went too far this time.

Co-operation with the wrong partners

But his ideas still have some mileage in the wake of the November attacks. Although we now know that almost all of the perpetrators grew up in France, in fact all but one of them were actually French citizens, the French political elite believes it can solve the problem by bombing IS in Syria. It is even considering co-operating with Syrian President Bashar al-Assad in this regard, a man jointly responsible for much of the misery and for the existence of IS in general.

But the radicalisation taking place in Europe, regardless of whether this is happening in France, Germany or other EU member states, is not a consequence of the existence of IS in the Middle East. "Fighting IS will not end the radicalisation of youth in Europe," says the French political scientist Olivier Roy. Contrary to many polemical contributions to the debate, Roy emphasises that what we are currently dealing with is not an Islamic uprising, but a youth revolt. 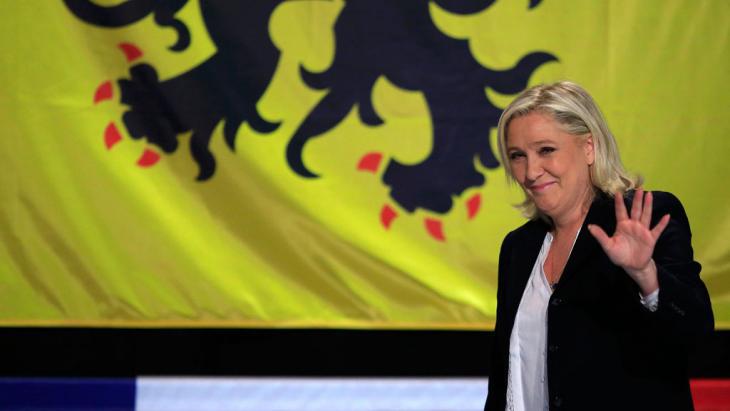 France's Muslims and the political establishment are in shock: the extreme right "Front National" led by Marine Le Pen was the strongest party during the first round of elections on Sunday, winning 27.7 percent of the vote. Three weeks after the Paris attacks, more than six million French people voted for the xenophobic and Islamophobic party, which took first place in six of France's 13 regions

Roy says this is very simple to prove: all the known perpetrators have been young people. None of the militants was older than 35. Their own parents had often put up a vehement fight against the extremism of their children. "These young French people are rebelling against society as a whole," says Olivier Roy. "On the one hand, this group is made up of second-generation Muslims in France, on the other there are also many converts. They come from different social backgrounds, but they share a common Islam that they themselves have created together. This is neither the lore-based, the cultural, nor the traditional Islam. That is why this movement cannot be understood as a general rebellion of Muslims," says Roy.

As long as France believes, however, that it can solve its problems at home by bombing another country – in the process killing not just enemy fighters, but also civilians, as in any war – there can be no prospect of success. It is much more a case of current actions playing into the hands of the extremists.

"See, they're bombing your children!" or "Look, they're siding with the worst dictators against you!" are just some of the slogans being put out through their propaganda channels.

"You've got the weapons, we've got the champagne, " was a recent "Charlie Hebdo" headline after the November attacks. And while "we" toss out bombs over Syria, advocate supposedly democratic values and believe we are "Charlie", "they", banished from the nearby postcard motifs of Paris or Marseille, continue to foment their unbridled hatred in run-down prefab blocks.

Home
Print
Newsletter
More on this topic
The French crime writer Karim Miske in interview: ″There are no simple solutions″Terrorism debate: "Imagine there's a war and nobody notices"Airstrikes against IS: Solidarity yet no strategyBook review: Victoria Schneider's "Are you Charlie?": A deeply divided country
Related Topics
'Islamic State' | IS, Charlie Hebdo, Clash of civilisation, International terrorism, Islam in Europe, Jihadism | Jihadists, Migration, Muslims in the West, Radicalisation, Rule of law
All Topics

With "Assad or We Burn the Country", Sam Dagher has furnished the world with some genuine ammunition against the Syrian regime's on-going campaign of disinformation. The only ... END_OF_DOCUMENT_TOKEN_TO_BE_REPLACED

Islamist attacks such as those that took place in Paris this last autumn evidence a new kind of perpetrator. In place of individual terror organisations, networks appear to have ... END_OF_DOCUMENT_TOKEN_TO_BE_REPLACED

Decades of oil exports have completely destabilised culture and politics in the Middle East. Speaking with Lena Bopp, the renowned writer Amin Maalouf says that the distorted ... END_OF_DOCUMENT_TOKEN_TO_BE_REPLACED

France is locked in a row over Islam, Islamophobia and the headscarf. But one key voice is almost completely missing from the debate – that of the women who wear the veil. By ... END_OF_DOCUMENT_TOKEN_TO_BE_REPLACED

The EU's relationship with the Moroccan government reinforces the political status quo at a time when a growing number of Moroccans appear to want change. By Chloe Teevan END_OF_DOCUMENT_TOKEN_TO_BE_REPLACED
Author:
Emran Feroz
Date:
Mail:
Send via mail