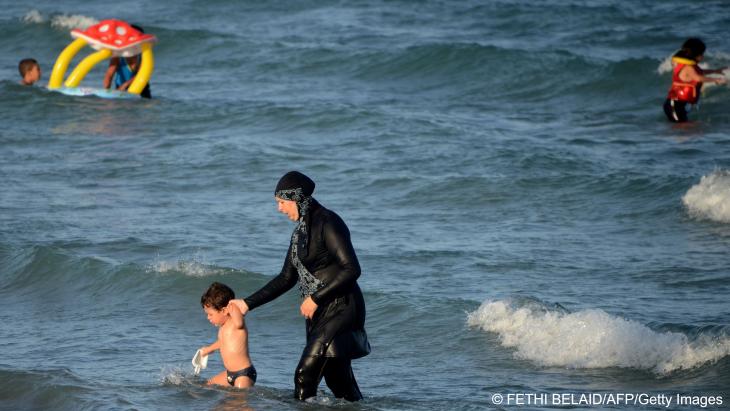 Burkinis have been a long-standing catalyst for dispute in France, calling societal attitudes towards Islam and feminism into question. Rule changes in Grenoble suggest opposition to the garment could be receding, writes Joanna York

Burkinis have been a long-standing catalyst for dispute in France, calling societal attitudes towards Islam and feminism into question. Rule changes in Grenoble’s swimming pools suggest that opposition to the garment could be receding.

With summer opening times for municipal swimming pools soon to come, Grenoble's town hall will vote on May 16 on potential changes to swimwear rules.

So far, so ordinary. It is not unusual for French swimming pools to issue strict swimwear regulations; in most, swimming caps and body-hugging, lycra outfits are a must. But in Grenoble, Mayor Éric Piolle wants to make the rules more permissive, especially for female swimmers.

"Our wish is to get rid of absurd restrictions," he said. "This includes [allowing] bare breasts and swimming costumes that give extra coverage for sun protection or for beliefs. It is not about taking a position for or against the burkini specifically," he said.

The burkini is a swimming costume that covers the entire body, including the head, leaving only the face, hands and feet visible. The planned change in Grenoble comes after protests in the city that began in 2018. In 2020 and 2021 a group of activists from the community grassroots association Alliance Citoyenne protested by wearing burkinis in Grenoble's swimming pools.

Height of absurdity: Nice police seem to force burkini-clad woman to remove it and fine her. https://t.co/rhHfOEQ5Dz pic.twitter.com/yQ4egCwjrq

Despite what heads of state may claim, the Russian attack on Ukraine is not a wake-up call for a self-confident Europe that defends its values. The war is accelerating the decline ... END_OF_DOCUMENT_TOKEN_TO_BE_REPLACED

At the EU's outer borders, the right of migrants to a fair asylum procedure continues to be systematically disregarded. Take Greece, for example: in the worst case scenario, those ... END_OF_DOCUMENT_TOKEN_TO_BE_REPLACED

Madrid's about-face on the Western Sahara conflict has enraged Algeria. Trade relations have been frozen unilaterally and a cut in gas supplies to Europe could be in the pipeline ... END_OF_DOCUMENT_TOKEN_TO_BE_REPLACED

Mourad al-Marouai was just nine when a landmine killed him on a beach in war-torn Yemen, a tragedy that will haunt his family forever. After a swim, the little boy "suddenly ... END_OF_DOCUMENT_TOKEN_TO_BE_REPLACED

A ceasefire has been in effect in Libya for the past year and a half. Yet after Russia's attack on Ukraine, another proxy war looms in Africa's most oil-rich country. Mirco ... END_OF_DOCUMENT_TOKEN_TO_BE_REPLACED

The Ukraine war has seen energy prices spike with oil producers in the Middle East making more money than ever. But will it put the brakes on long-planned reforms to diversify oil ... END_OF_DOCUMENT_TOKEN_TO_BE_REPLACED
Date:
Mail:
Send via mail

END_OF_DOCUMENT_TOKEN_TO_BE_REPLACED
Social media
and networks
Subscribe to our
newsletter