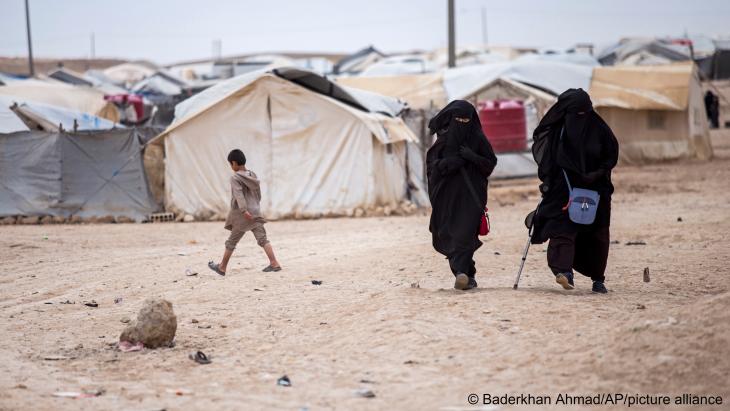 France has repatriated 35 children and 16 mothers from camps in Syria where family members of suspected Islamic State group jihadists have been held, the foreign ministry said on Tuesday.

"France has today undertaken the return to the country of 35 French minors who were in camps in northeast Syria. This operation also includes the return of 16 mothers from these same camps," a statement said.

The French foreign ministry statement thanked local authorities in northeast Syria for their cooperation in making the operation possible.

‘One of the most dangerous places’ for children

Human rights groups have long urged the governments of France and other Western countries to bring home the children who were either brought to the territories in Syria and Iraq once controlled by the Islamic State (IS) group by their parents or born there during the years of fighting.

Hundreds of children of French nationals are being held in Kurdish-run camps in northeast Syria where malnutrition and disease is rife.

One of the biggest and most overcrowded is Al-Hol where children were witnessing "devastating levels of violence daily, leading to nightmares, psychological problems, and fear for their own lives", according to a Save the Children report released in September 2021.

Last year, an average of more than two people were killed per week, making Al Hol, per capita, one of the most dangerous places in the world to be a child, the report noted.

France has argued that its security concerns are paramount, having suffered a series of jihadist attacks, including the November 2015 assaults on the Bataclan concert hall and other targets around Paris that left 130 people dead.

Many of the children are with their mothers or fathers who pose a risk, and France has insisted that French nationals face local justice.

More on this topic
A 'tragic life' for the displaced in Syria's Al-Hol camp "IS brides" open up in Syria camp documentary at SXSWEurope's treatment of IS returnees: Eroding the constitutional state
Home
Print
Newsletter
MoreAll Topics

END_OF_DOCUMENT_TOKEN_TO_BE_REPLACED
Social media
and networks
Subscribe to our
newsletter