Assuming the stance of a man of action, almost like a military commander, Macron presented a strategy to prevent exactly the sort of murderous acts that would then unfold in the second half of October. The failure of that strategy is so spectacular that there is something spooky about it. It is a hair-raising lesson about how dangerous it can be when communication goes wrong.

Macron cited "the school" as a central pillar of his programme. The Islamist milieu was increasingly undermining compulsory education, he said. More and more parents were withdrawing their children from regular schools and sending them to private institutions where they were taught a radical version of Islam that rejected the values of the Republic.

This trend must be stopped, said Macron. The school must be the institution where all children learn the meaning of liberty, equality and fraternity. 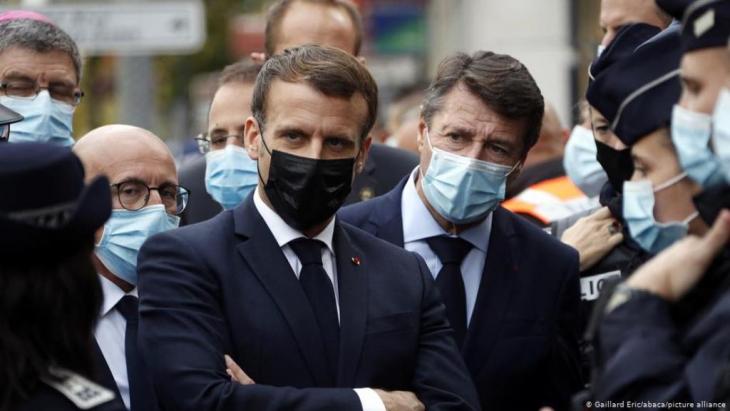 French Republic in crisis: "One important lesson we must learn from the history of colonialism, apart from acknowledging all the crimes against humanity, which Macron himself once described as such before his election victory more than three years ago, should be recognising the limits of one's own power, and even accepting one's powerlessness,“ writes Stefan Buchen

It is impossible not to view the decapitation of Samuel Paty as a gruesome answer to this part of Macron's speech. The history teacher had shown his class the Muhammad cartoons published six years ago by the satirical newspaper Charlie Hebdo as a way of addressing the issue of freedom of expression.

The state leadership could not have been more cruelly reminded that its words are ineffectual for reaching the intended audience. This is no less apparent in other elements of Macron's anti-Islamism strategy.

The President said he wanted to create an "Islam of Enlightenment" (un Islam des Lumières) in order to counter the obscurantist Islam of the preachers in the suburbs.

In his day, Barack Obama even dispatched a blond Arab princess – Rania of Jordan – to fight bad Islam with good. Le Président de la République decided just to do it himself, without mediation. This is simply arrogant, a criminal overestimation of his own moral authority.

In his controversial book published in 2020, French author Pascal Bruckner describes anti-Muslim sentiment as a fiction, claiming that the term "Islamophobia" is being used to ... END_OF_DOCUMENT_TOKEN_TO_BE_REPLACED

Several media reports in recent weeks have focused on the potential threat presented by Islamist groups in Germany. The discourse is fraught with generalisations, both sides ... END_OF_DOCUMENT_TOKEN_TO_BE_REPLACED

Critics of France's draft law to combat "radical Islamism" say the proposed measures are inefficient and will further stigmatise Muslims. They assert that involving Muslims in the ... END_OF_DOCUMENT_TOKEN_TO_BE_REPLACED

Sanctions against Ankara are being considered at the EU summit. The number of those in favour has risen. It remains unclear how Germany will behave. But would such measures have ... END_OF_DOCUMENT_TOKEN_TO_BE_REPLACED

Prominent Islamic scholar Muhammed Abu Zaid has urged Muslims in France to cooperate with the government. At the same time, he emphasised the need for the French authorities to ... END_OF_DOCUMENT_TOKEN_TO_BE_REPLACED
Author:
Stefan Buchen
Date:
Mail:
Send via mail

END_OF_DOCUMENT_TOKEN_TO_BE_REPLACED
Social media
and networks
Subscribe to our
newsletter