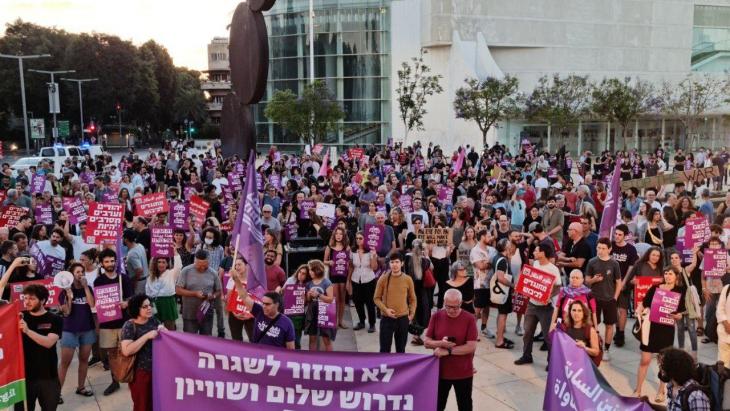 The eruption of violence in Gaza prompted demonstrations around the world last weekend. Across Israel, Jewish and Arab citizens have also been taking to the streets to call for an end to the inter-communal clashes that have erupted within the country's borders. By Tamar Shiloh Vidon

“Arabs and Jewish citizens of Israel, let’s live together,” read the headline of a Haaretz editorial on Tuesday. On Facebook, temporary profile frames used by Jews, Palestinians and others proclaimed, “Stop the war” or declared that “Arabs and Jews choose life” and “Jews and Arabs refuse to be enemies”.

After Hamas and Israel began trading rocket fire and air strikes in Gaza on 10 May, riots broke out inside Israel, mainly in cities with a mixed Jewish and Arab population, such as Jaffa, Lod, Acre, Nazareth, Bat Yam – and, of course, Jerusalem – resulting in serious injuries and deaths, as well as widespread destruction of property and much tension and fear.

The Israeli government last week declared a state of emergency in several of these cities, calling up 1,000 border police in a “massive reinforcement” to help contain the unrest.

But Jewish and Arab citizens have also taken to the streets in rallies intended to strengthen the fragile fabric of intercommunal coexistence that has been holding together peacefully, if tentatively, for decades.

Arabs and Jews in Israel: You can't tear us apart

As someone accustomed to presenting his country to interested outsiders, Israeli teacher and tour guide Noam Yatsiv makes the case for a more nuanced appreciation of the ... END_OF_DOCUMENT_TOKEN_TO_BE_REPLACED

Jewish voices are much more diverse than the public often sees. Jewish men and women who oppose the injustice of Israeli occupation in the West Bank deserve our respect and ... END_OF_DOCUMENT_TOKEN_TO_BE_REPLACED

The Germans have a fragmented perception of the conflict between Israel and the Palestinians, and their discourse is dominated by certain catchphrases. All the while, there is a ... END_OF_DOCUMENT_TOKEN_TO_BE_REPLACED

An unusual organisation brings Jews and Muslims together to fight hate and promote dialogue. In the small central German city of Marburg they have been jointly calling for an end ... END_OF_DOCUMENT_TOKEN_TO_BE_REPLACED

Professor Timothy Brennan's "Places of Mind: A Life of Edward Said" is a detailed biography of one of the most important intellectuals of the twentieth century, taking us on a ... END_OF_DOCUMENT_TOKEN_TO_BE_REPLACED

Yair Lapid, like his late father, is a journalist-turned-politician renowned for his staunchly secular positions. But as the centrist politician edges towards the Israeli ... END_OF_DOCUMENT_TOKEN_TO_BE_REPLACED
Author:
Tamar Shiloh Vidon
Date:
Mail:
Send via mail

END_OF_DOCUMENT_TOKEN_TO_BE_REPLACED
Social media
and networks
Subscribe to our
newsletter