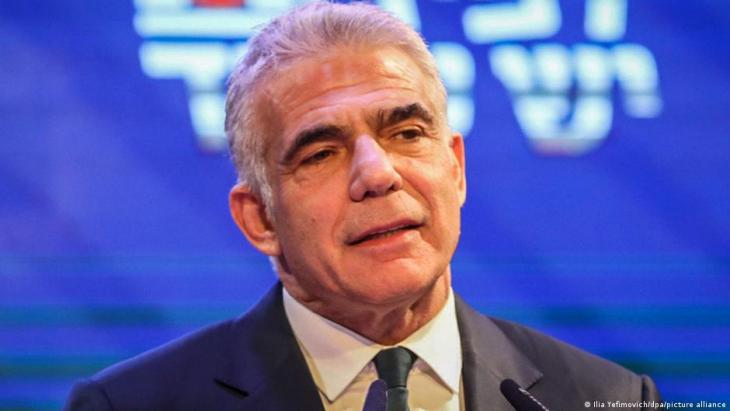 Yair Lapid, like his late father, is a journalist-turned-politician renowned for his staunchly secular positions. But as the centrist politician edges towards the Israeli premiership post, he's stepped out of his father’s shadow.

Back in the day when he was disseminating the news instead of making it, Yair Lapid had a standard final question on his weekly chat show on Israel’s Channel 2.

“What symbolises Israel for you?” the handsome TV host would ask his guest.

The answers were often long-winded, ranging from lighthearted to heartfelt. But when the leading journalist had his own father, former Israeli justice minister Joseph "Tommy" Lapid, on the show, the answer was illuminating. When the son asked the father what, in his view, represented Israel, the senior Lapid simply replied: "You."

The dreams of the father could well be coming true years after his death from cancer.

Under a rotating post agreement, the two men would split the premiership – with Bennett serving the first two years and Lapid the following two.

Hagit Ofran of Peace Now: The Zionist still holding a candle for peace and equality

Interview with Mustafa Barghouti: Palestinians rediscover their sense of unity

As someone accustomed to presenting his country to interested outsiders, Israeli teacher and tour guide Noam Yatsiv makes the case for a more nuanced appreciation of the ... END_OF_DOCUMENT_TOKEN_TO_BE_REPLACED

Jewish voices are much more diverse than the public often sees. Jewish men and women who oppose the injustice of Israeli occupation in the West Bank deserve our respect and ... END_OF_DOCUMENT_TOKEN_TO_BE_REPLACED

The Germans have a fragmented perception of the conflict between Israel and the Palestinians, and their discourse is dominated by certain catchphrases. All the while, there is a ... END_OF_DOCUMENT_TOKEN_TO_BE_REPLACED

An unusual organisation brings Jews and Muslims together to fight hate and promote dialogue. In the small central German city of Marburg they have been jointly calling for an end ... END_OF_DOCUMENT_TOKEN_TO_BE_REPLACED

Professor Timothy Brennan's "Places of Mind: A Life of Edward Said" is a detailed biography of one of the most important intellectuals of the twentieth century, taking us on a ... END_OF_DOCUMENT_TOKEN_TO_BE_REPLACED

END_OF_DOCUMENT_TOKEN_TO_BE_REPLACED
Social media
and networks
Subscribe to our
newsletter