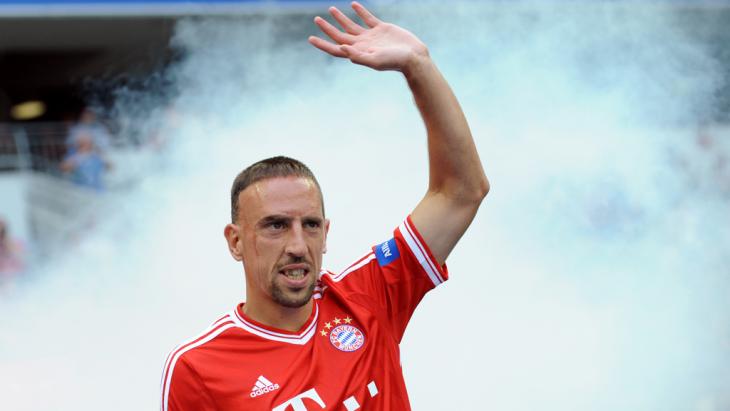 Franck Ribéry has never been in better shape, and - winning the Champions League plus the award for Best Player in Europe - 2013 has been the best year of his career. Yet things have not always been so rosy for Ribéry, a devout Muslim and former construction worker; not everything in his career has come easy. A portrait by André Tucic

Every week the instinctual soccer player wows the Bundesliga anew. The short-statured king of dribbling has not only been showered with superlatives in Germany. Thierry Henry called him the "nightmare of every defense" and Zinedine Zidane as the "jewel of French soccer". Franz Beckenbauer said of him: "For me, he’s up there with Lionel Messi and Christiano Ronaldo as one of the best players in the world." An accolade for the man from Boulogne-sur-Mer in northern France – a structurally weak region on the shore of the English Channel with an oppressively high rate of unemployment.

Only soccer saved Ribéry from becoming a welfare case, so it seems. But several years passed before he pocketed a salary of several million euros and showed the world how unconventional soccer can be played. Exactly this is what Ribéry values, because he has had hard times behind him: "We professional players have everything: we earn a lot and train at the most twice a day" – a bed of roses compared to what Ribéry himself has experienced.

A stony path to the top

Ten years ago Ribéry was laboring with his father as a construction worker. Before that much had gone awry. At the age of 13 OSC Lille enrolled him for a youth boarding school to cultivate his talent as a soccer player and sports trainer. His school performance was unsatisfactory, and he was thrown out and played for a fourth division team for 150 euros a month. An ignominy for the highly talented 17-year-old. His demand for higher wages was ignored and he quit. Ribéry's days as a soccer player appeared to be numbered. Instead of the training grounds he marched at daybreak to the construction site. For the time being at least.

Then at the age of 20 he became unemployed. Nothing was happening anymore. No money for rent, not to mention for the wedding planned with the woman who is his wife today, Algerian Wahiba. Then came the turning point that not even Hollywood could have staged better. Ribéry received an offer from third division team Stade Brest, signed a contract, and within a short time awakened the interest of first division team FC Metz, where trainer Jean Fernandez recognized his potential.

But here there was also trouble. First Ribéry demanded a higher salary, then he started a brawl in a disco. Unacceptable for Metz. Galatasaray Istanbul saw it all in a different light and lured the unruly genius to the Bosporus. But this too would not prove to be a long liaison. After only 14 games and less than a year Ribéry sued the club for owing him several months' salary.

Reason enough for Olympique Marseille to hire him in 2005, where Jean Fernandez – his promoter from Metz – had the say.

Ribéry matured and became a celebrity in Marseille. Here he managed his breakthrough as a national team player shortly before the World Cup in 2006.

Today the 30-year-old is married, lives in a villa in Munich, and has nearly 78 international matches under his belt. And at l'Èquipe he is regarded as the head of the midfield as well as Zidane's legitimate successor. Finally in 2013, Ribéry won the Champions League with Bayern Munich in a "German" final against rivals Borussia Dortmund.

Indeed, 2013 has been the year of his life. Ribéry was ranked the second-best footballer in the world by Goal and he won the UEFA Best Player in Europe Award. This was one of the moments in which he covered his face with his hands and sent a prayer to the heavens: "Always believe in God" is the life philosophy of the Muslim converted to Islam in 2002 and father of two daughters.

Whether it was the car accident that converted Ribéry and turned Franck into Bilal remains unknown. The reality is that this event is still inscribed in his face today. As a two-year-old he was accompanying his father who was working as a chauffeur. The child who today has become a top soccer player was sitting in the backseat without a seatbelt when the car accident occurred and he was thrown through the windshield. His face was ripped by shards of glass.

Even an immediate skin transplant could not prevent scars from forming. But a working class boy is not the type for plastic surgery: "It wasn't easy. I was often teased. But that just made me tougher," recalls Ribéry. Nevertheless he refuses to look back in bitterness, and is regarded as a cheerful soul with a predilection for practical jokes. His more notable stunts include driving a tractor on field during one of his last matches with Marseille.

In the training breaks he cuts up the socks of his Munich colleagues or smears toothpaste under the doorknobs of the rooms at a luxurious golf hotel. When necessary, his colleagues receive a shower from a 10-liter bucket of water. Also, during the 2008-2009 winter break, he commandeered the team bus while in Dubai, and crashed it.

During a recent interview with the prestigious German daily Süddeutschen Zeitung he opened the conversation saucily with the statement, "I heard that your colleagues claim that I'm not a 'nice guy', accompanied with an insulted look. When the journalists looked shocked and embarrassed, he explained with a laugh: "A joke, a joke; I was just pulling your leg!" That is apparently just one comical anecdote from his everyday life, but it shows what a genial contrast Ribéry is to the sallow German professionals who have adapted to the point of self-denial.

Thus the man from Boulogne-sur-Mer is not only a soccer attraction but also a human enrichment. His teammates at FC Bayern like him. And Ribéry says he is happy with the team: "Here I can be who I am, have my fun and play soccer."

The book "The Invention of the Maghreb: between Africa and the Middle East" prompts us to review basic terminology. This includes terms that we use almost every day as if they are ... END_OF_DOCUMENT_TOKEN_TO_BE_REPLACED

Asmaa al-Atawna's debut novel "Missing Picture" has been published in German translation (Keine Luft zum Atmen – Mein Weg in die Freiheit). In it, she describes life in Gaza from ... END_OF_DOCUMENT_TOKEN_TO_BE_REPLACED

Lebanon was long viewed as the Switzerland of the Middle East. Until relatively recently, billions were deposited in its banks. Gulf states were among the foremost investors in ... END_OF_DOCUMENT_TOKEN_TO_BE_REPLACED

To celebrate the bicentenary of the deciphering of the Rosetta Stone, the British Museum is running an exhibition entitled "Hieroglyphs: unlocking ancient Egypt" until February ... END_OF_DOCUMENT_TOKEN_TO_BE_REPLACED

Since Russia invaded Ukraine, Europe has been trying to find alternatives to Russian gas, inevitably zeroing in on the Arab Gulf states. In his commentary, Yemeni politician ... END_OF_DOCUMENT_TOKEN_TO_BE_REPLACED

Nouara may be 65, but she is ready to join thousands of others who burn their ID and pay traffickers for the chance of a new life in Europe. Zineb Bettayeb reports END_OF_DOCUMENT_TOKEN_TO_BE_REPLACED
Author:
André Tucic
Date:
Mail:
Send via mail

END_OF_DOCUMENT_TOKEN_TO_BE_REPLACED
Social media
and networks
Subscribe to our
newsletter