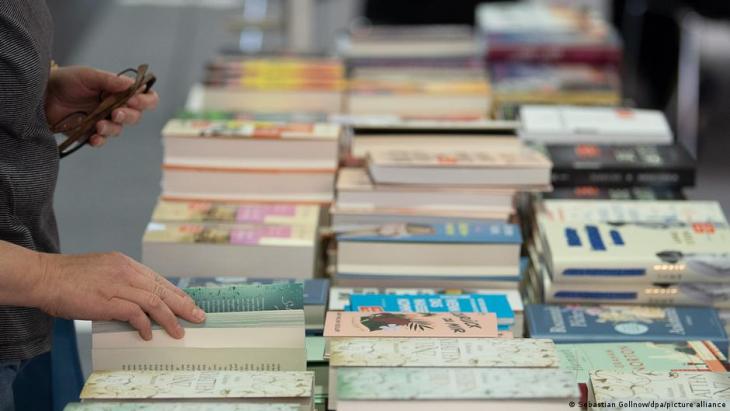 Iran has withdrawn its participation in the Frankfurt Book Fair, accusing the event of meddling in the country's domestic affairs. Organisers have denied the accusation. By Kristina Reymann-Schneider

Numerous national and international publishing houses will present their new titles at the Frankfurt Book Fair, which takes place from 18 to 23 October. Yet there will be no official stand representing the country of Iran – nor will there be one from Russia. The festival's organisers excluded Russia earlier this year due to the country's war of aggression against Ukraine.

Iran, meanwhile, had originally agreed to participate, but has now withdrawn its presence, according to a report by the country's state news agency, IRNA. The reason being, according to the Iranian report, is that those responsible for the Frankfurt Book Fair had "openly interfered in Iran's internal affairs". The organisers are said to have stated in a letter that they could not guarantee the security of the Iranian stand at the fair. In addition, there were apparently problems getting visas for the Iranian delegation.

The Frankfurt Book Fair, however, has presented the situation differently. The fair's press spokeswoman, Kathrin Grun, said that the two parties had been in contact "several times". Grun said the fair's organisers had also "expressed solidarity with the protest movement in Iran", but stated that security was guaranteed for all exhibitors at the book fair, regardless of which country they hail from. Security is of the utmost importance at the annual fair. "We are working closely with Messe Frankfurt's security service and the police. On all days of the fair, there will be an increased number of police officers in the halls, both plainclothes and in uniform, who will immediately follow up with any indication of threats," she said.

In addition to offering more security for the general public, the increased security allows authors and top international politicians who have been discriminated against, threatened or politically persecuted to remain safe while at the annual event. The press spokesperson declined to comment on visa allocation, saying it was not in the hands of the fair organisers. 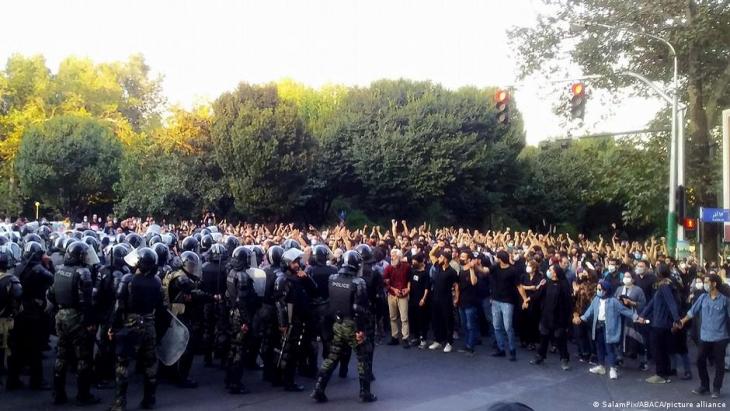 Protests against the Iranian regime

The violent death of the young Kurdish woman Jina Mahsa Amini on 16 September also prompted action at the Frankfurt Book Fair. Organisers added the panel discussion titled "Iran – which way? The uprising against the Mullah regime and what the rest of the world can do" in cooperation with PEN Berlin.

Since the death of Amini, who was arrested for violating the Islamic dress code and who, according to the human rights organisation Amnesty International, died "presumably as a result of police violence", thousands of people in Iran have been protesting against traditional and religious values and laws. The regime has fought back hard and tried to quell the protests, often with violence. According to Amnesty International, 144 people have been killed by security forces as of October 3, including at least 23 children.

In the meantime, demonstrations in solidarity with Iranian protesters have taken place around the world. In Germany, too, people are taking to the streets to draw attention to the human rights violations in Iran. A few days ago, numerous people from the German cultural scene wrote an open letter to German Foreign Minister Annalena Baerbock. In it, they demanded that respect for human and civil rights should be a prerequisite for nuclear negotiations with Iran. Human rights violations should be legally punished and the dialogue with civil society should be strengthened, they wrote.

German-Iranian writer Navid Kermani, the 2015 winner of the Peace Prize of the German Book Trade, is among the signatories. In an interview with the Konrad Adenauer Foundation, he said Germany should send "much clearer signs of support which are also visible in Iran". The German government, he said, is far too reticent. "Germany is about to repeat the mistake of its Russia policy, namely losing sight of the long-term consequences out of short-term energy policy interests and the desire for stability – to the detriment of our own realpolitik," he said. 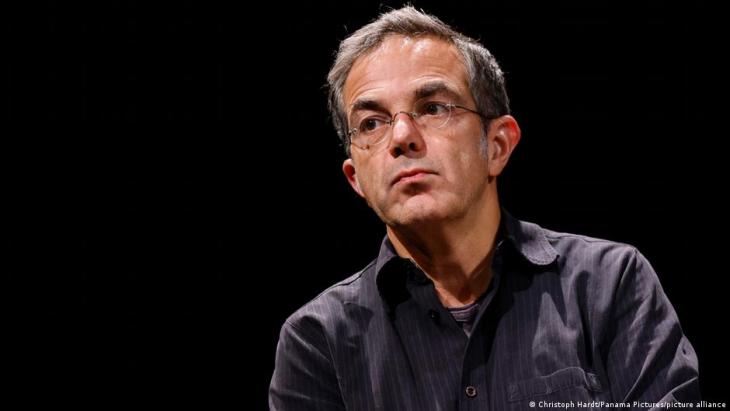 Germany has to do more: in interview with the Konrad Adenauer Foundation, German-Iranian writer Navid Kermani said Germany should send "much clearer signs of support which are also visible in Iran". The German government, he added, is far too reticent. "Germany is about to repeat the mistake of its Russia policy, namely losing sight of the long-term consequences out of short-term energy policy interests and the desire for stability – to the detriment of our own realpolitik"

In the meantime, Baerbock and her European counterparts have taken steps toward this goal. On October 17, they agreed to place sanctions against the chiefs of the so-called "morality" police, the cyber unit of the Iranian Revolutionary Guard, the Revolutionary Guard's Basij paramilitary force, a uniformed branch of the national police and officials in charge of those forces. Those affected by such sanctions may no longer enter the European Union, and their assets in the EU may be frozen.

Better to invite than to exclude?

The report by the Iranian news agency seems to suggest that the Iranian delegation is not wanted at the Frankfurt Book Fair. However, the book fair has shown in the past that it allows all voices to be heard – often to an extent that has prompted anger. In recent years, for example, the fair has been criticised for allowing right-wing publishers to present their books in a way that attracts public attention.

"We must hear all voices, insofar as they do not violate the law, and give them the opportunity to be heard," said the president and CEO of the Frankfurt Book Fair, Jürgen Boos, in a recent interview in the Frankfurter Rundschau daily newspaper. This also explains why autocratically ruled countries such as China, Turkey, Oman, Hungary or Syria are also represented at the fair with their own stands, he added.

Analyst Iyad El-Baghdadi examines the ongoing tensions between the United States and the two Gulf states – Saudi Arabia and the UAE – and their geopolitical implications in ... END_OF_DOCUMENT_TOKEN_TO_BE_REPLACED

From the Euphrates to the Mekong, dams that ensure one country's water supply risk leaving others parched. But shared water resources can be a source of peace as well as conflict ... END_OF_DOCUMENT_TOKEN_TO_BE_REPLACED

For over fifty years, British photographer Peter Sanders travelled across the Middle East and further afield, seeking out the saints of Islam. His work uncovers a little-known ... END_OF_DOCUMENT_TOKEN_TO_BE_REPLACED

Europe's double standard on refugees, exposed yet again by the war in Ukraine, is morally deaf and geopolitically dumb. Europe can only defend itself by persuading developing and ... END_OF_DOCUMENT_TOKEN_TO_BE_REPLACED
Author:
Kristina Reymann-Schneider
Date:
Mail:
Send via mail

END_OF_DOCUMENT_TOKEN_TO_BE_REPLACED
Social media
and networks
Subscribe to our
newsletter