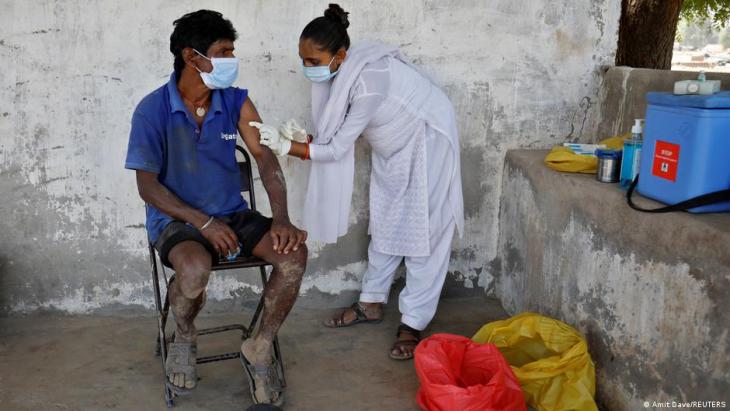 India opened up free vaccinations to all adults in an attempt to bolster its inoculation drive on Monday, as Prime Minister Narendra Modi kicked off a muted International Yoga Day hailing the practice's "protective" properties against the virus.

The country's coronavirus vaccination drive has significantly slowed in recent months due to a shortage of jabs and hesitancy, even as it battled a vicious surge in cases in April and May that overwhelmed the healthcare system in many places.

Case numbers have since fallen sharply across India and the authorities have again relaxed many restrictions, sparking fears of another wave.

The government had expanded the vaccine rollout to include all adults aged below 45 on 1 May, but states and private hospitals had to procure and buy the shots themselves for the younger age group, leading to confusion and shortages.

But New Delhi later changed tack, announcing it would procure 75 percent of vaccine supplies and distribute them to states so that they can inoculate people for free. So far it has administered 275 million shots, with barely four percent of people fully vaccinated.

The government aims to inoculate all of India's almost 1.1 billion adults by the end of the year.

"The vaccination drive is expected to pick up speed now... the daily vaccination has picked up over the last week and is expected to strengthen further," community health expert Rajib Dasgupta told journalists. "However, both existing inequities as well as hesitancy merit deeper attention to make this a success."

The free rollout came as Modi marked the annual Yoga Day event with an early-morning address to the nation as it emerges from the surge, saying that the practice had again proved itself to be a source of "inner strength".

"When I speak to frontline warriors, they tell me that they have adopted yoga as a protective shield in their fight against coronavirus. Doctors have strengthened themselves with yoga and also used yoga to treat their patients," Modi said.

Public parks were re-opened in Delhi on Monday just in time, but the number of events for Yoga Day was cut back around the country for the second year running because of the pandemic.

Yoga Day – proposed by Modi and adopted by the United Nations in 2014 – is observed mostly in India, but also worldwide on the Northern Hemisphere's longest day.

Throughout the pandemic, India's government has touted yoga and herbal medicines – sales of which have boomed – to protect and give relief to people infected with the virus.

But evidence is scant and the claims have faced pushback from India's doctors, who wore black armbands last month to protest Baba Ramdev, a guru with ties to the Modi administration who has said yoga can cure COVID-19.    (AFP)

END_OF_DOCUMENT_TOKEN_TO_BE_REPLACED
Social media
and networks
Subscribe to our
newsletter