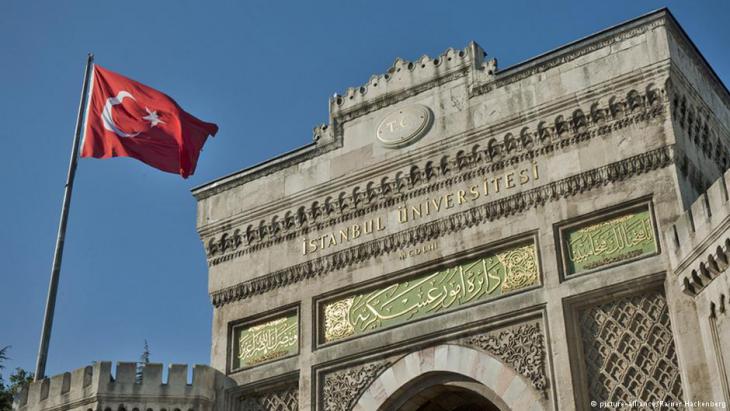 Freedom of expression in Turkey

Academics on the run

Turkish universities are coming down hard on academics who signed an appeal for peace, providing the government with an ideal pretext to deal with its political opponents, writes Joseph Croitoru

On 10 January this year, 1,128 Turkish academics published a petition sharply criticising the Turkish army's military operation in Kurdish regions in the southeast of the country, which has been ongoing since the summer of 2015. The text speaks of a "deliberate and planned massacre", as well as the "targeted expulsion of Kurds and other ethnic groups". "We will not be party to this crime!" the signatories declared, demanding an end to the military operation and compensation for affected civilians.

The Turkish government intervened shortly after the publication of this appeal. President Erdogan insulted the signatories as "sinister and ignorant pseudo-intellectuals" and launched a witch hunt that continues to this day. The university council, a body loyal to the AKP, announced directly thereafter that the requisite steps would be taken.

At this point, many signatories were denigrated and threatened at their universities by ultranationalists to such an extent that they stayed away from their places of work. Disciplinary proceedings were opened against hundreds of academics, but not just within their universities: the authorities also opened investigations – among other things into the alleged supporting of terrorism. Many lecturers were discharged or suspended during this wave of sanctions.

When four representatives of the petition initiative protested against these measures at a press conference in Istanbul on 10 March, they were taken into custody for the alleged dissemination of terrorist propaganda. But accusations of assisting terrorism could not be upheld during the Istanbul trial against the academics, which began on 22 April. They were temporarily released and are now waiting for the case to be continued on 27 September, in which, based on Article 301 of the Turkish penal code, the charge sheet will read "Insulting the Turkish nation, the state of the Turkish republic and the institutions and organs of the state".

The impending trial is just the spectacular part of the sanctions. The other part, which has thus far been more serious for those affected, has generated fewer headlines, because action has been taken against the rebellious lecturers individually and for varying reasons.

The latest report by the solidarity group "Academics for Peace" lists a total of 37 cases of dismissals, as well as 31 suspensions and 12 resignations. Disciplinary proceedings are underway against 513 signatories, with the authorities carrying out investigations against 412 of the academics. Upon closer inspection, there is a feeling that both public and private universities ("foundation universities") are using the petition as a pretext to get rid of an entire array of critical voices. 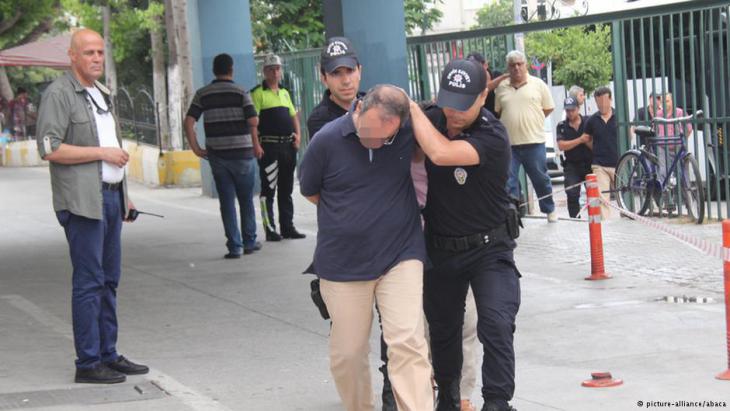 Ritual cleansing: some 35,000 members of the army, police, judiciary and civil service have been detained or suspended on suspicion of Gulenist links since last weekend's abortive coup, during which more than 230 people were killed. The purge extended to the education sector on Tuesday, with all university deans ordered to resign, according to state TRT television and the licences of 21,000 private school teachers revoked

In this process, owing to the greater freedom they have in the drawing up of contracts, it is much easier for private universities to discard disagreeable members of staff – so far, there have been many more dismissals at foundation universities (26 out of a total of 37 cases).

The most recent examples of these are the cases of the sociologist Asli Vatansever and the social-psychologist Serdar M. Degirmencioglu, both of them discharged from the private Dogus University in Istanbul. Both had come to the attention of the authorities even before the petition, through critical publications on the excessive privatisation of the higher education sector.

Asli Vatansever, who graduated in Hamburg in 2010, published the Turkish-language study "Willing to teach anything" in 2015, in which she spotlights the difficult working conditions at private universities that have put teachers in a precarious situation. Ms Vatansever reports that university managers began keeping a close eye on her as a result of the controversy resulting from this publication.

Just as in the case of many of the signatories, the first disciplinary proceedings were launched against the sociologist in February, soon followed by two more, as she continued her active involvement in the peace initiative – most recently in mid-March with the public reading of a press release in the Kurdish city of Diyarbakir under siege by the Turkish military.

The early termination of her temporary contract as assistant professor in the middle of the current term is proof, says the sociology lecturer, that the university management "is not taking its academic responsibility at all seriously". It is an indication of the "corruptibility and the ethical decline of the Turkish higher education sector," she says.

For Serdar M. Degirmencioglu too, his criticism of the state of the private universities was not without consequences. All the more so when he accused these institutions of disregarding their non-profit status to focus on their own enrichment. The social-psychologist had already been dismissed once because of this, back in 2013, just 40 days after his appointment as full professor – but he successfully appealed the decision. He also plans to take his case to court on this occasion.

The university is now citing the Civil Servant Act No. 657, Article 125/E-b. This Article allows for the maximum penalty of exclusion from public service for both the publication and dissemination of banned works and declarations with political and ideological content and their presentation in the form of flyers and posters in the respective institutions.

But Degirmencioglu says he does not see how this law can be applied to him. The reasons cited for the charges against his colleague Vatansever are even more vague: with the signing of the petition, she accused the state of a "massacre", which the university management claims justifies disciplinary proceedings. The sociologist also plans to appeal, saying that the university is using "a political difference of opinion to rob me of my contractual rights". 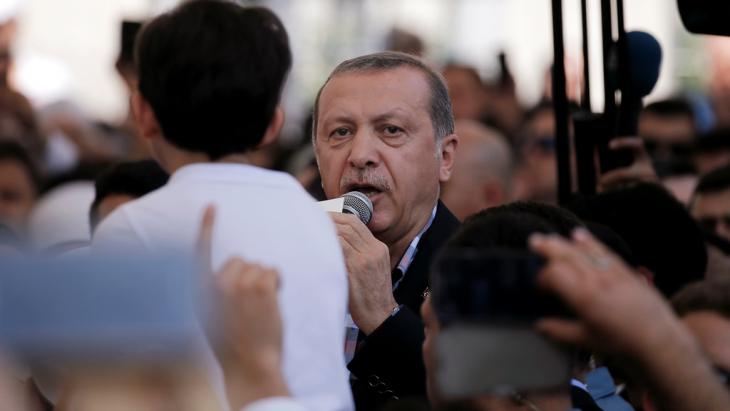 A veritable witch hunt: in the wake of the recent coup, Turkey's Council of Higher Education has announced that Turkish academics have been instructed not to travel abroad on assignments. Academics who are currently abroad and do not have a compelling reason to stay outside the country, should return

One does not have to search for long in the publications of both academics to find views that could ruffle the feathers of the AKP. Asli Vatansever's German dissertation is titled "Origins of Islamism in the Ottoman Empire. A World-System Analytical Perspective".  In it, she ascertains "inherent contradictions in the Ottoman system of politicising Islam" and a "disproportionate state power", which is diametrically opposed to the current AKP line which glorifies the Ottomans as tolerant rulers.

And in 2012, Serdar M. Degirmencioglu analysed the "body politics and sexual education" of Erdogan's party, also outlining his personal views on the matter. According to him, the "ruler system" is finding increasing application in Turkish secondary schools: this increases the minimum distance between girls' and boys' desks from 45 centimetres to a whole metre.

In 2014, the social-psychologist published an anthology in Turkish that ventured into a taboo area: "They said die, so I died – myths of martyrdom in Turkey". In it, Degirmencioglu examined how Turkey commemorates the Battle of Gallipoli, an event that has undergone intensive Islamisation by the AKP. He castigates the subsidised excursions to this historic place, organised by local AKP politicians all over the country, as "martyr tourism".

The government clearly wants to gag these and other critics of the regime, who are also on the list of sacked and otherwise sanctioned lecturers. Even if those affected are able to defend their rights – many have been taken to court – the threat will by no means have been averted.

After all, should their colleagues, who have been temporarily released from detention, be given custodial sentences in September for "defamation of the state", all signatories could face the same fate. This would make it easy to eliminate the nation's academic elite. The fact that the initiative has been awarded this year's Aachen Peace Prize can only be welcomed.

The USA and NATO plan to withdraw from Afghanistan by September. The operation is risky, the outcome uncertain. Many Afghans fear civil war. The quake on the Hindu Kush will also ... END_OF_DOCUMENT_TOKEN_TO_BE_REPLACED

The neo-Ottomanism propagated by Erdogan has long been more than rhetoric and symbolic politics. This can be seen from recent developments in parts of northern Syria, where Turkey ... END_OF_DOCUMENT_TOKEN_TO_BE_REPLACED

Televised Turkish dramas are all the rage in the Middle East. A young Ottoman TV Empire has been expanding its soft power by harnessing regional dialects, Arabic names and viewers ... END_OF_DOCUMENT_TOKEN_TO_BE_REPLACED

Researchers agree that climate change alone cannot be blamed for the outbreak of war in Syria in 2011. However, neither can it be ignored as a reason this once blossoming country ... END_OF_DOCUMENT_TOKEN_TO_BE_REPLACED

The Sufi Trail is a long-distance hiking route from Istanbul to Konya that seeks to revive the ancient tracks used by foot pilgrims on their way to Mecca. Marian Brehmer spoke to ... END_OF_DOCUMENT_TOKEN_TO_BE_REPLACED
Author:
Joseph Croitoru
Date:
Mail:
Send via mail

END_OF_DOCUMENT_TOKEN_TO_BE_REPLACED
Social media
and networks
Subscribe to our
newsletter