Atomic Contamination in the Desert

France not only conducted nuclear weapon tests in the South Pacific, but also in its former colony of Algeria. Even today, Paris still refuses to acknowledge the judicial protests of the victims. Bernhard Schmid reports 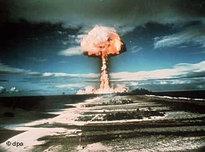 ​​"We didn't do anything wrong; the others are, or were, much more ruthless." This is the same familiar plea the French state has been making all along whenever the topic was broached of the "human price" that was paid for the nuclear tests conducted by the nation's army from 1960 to 1996.

A parliamentary report published in 2002 brazenly states that such nuclear weapons testing could "not be carried out without affecting the environment at the test sites and without human risk."

However, the paper continues, "all of these effects are ridiculously small in comparison to those of the tests executed by the two superpowers after 1945."

Injured persons, who do not exactly find the consequences of the atomic weapons testing "ridiculous," were also left behind by French military history, however. This was not only the case in the French Polynesian islands in the South Pacific, but also in the North African Sahara region.

In June 2001 the Algerian daily paper Liberté reported, for example, that early livestock mortality is still a problem today within a radius of several dozen kilometers of the test site in southwest Algeria, which can be traced to radioactive contamination concentrated in the sparse vegetation of this desert region.

Secret clauses in the Evian Accords

Since France conducted its first atomic bomb test in February 1960, the Paris regime has carried out a total of 210 nuclear weapons tests worldwide. First came the explosions in southern Algeria, close to the Sahara town of Colomb-Béchar and later in tunnels in the Hoggar mountains.

Up to 1966, four years after Algeria's independence from its former colonial rulers, France was still testing nuclear warheads in the North African countryside. This was made possible by secret clauses in the Evian Accords, which brought a peace fire in Algeria in March 1962. Four aboveground tests followed a total of 13 explosions under the earth.

They resulted in the radioactive contamination of a 150-kilometer-wide swath south of Colomb-Béchar. Even worse is the fact that the materials used directly in the atomic testing, such as trucks and transport vehicles, were simply buried in the Sahara, close to the surface.

The desert was regarded as a giant nuclear waste dump. But its inhabitants, who know little of the invisible risks inherent in high radioactivity, later dug up the equipment and sold it.

675 times the potential of the Hiroshima bomb

Later, the French government transferred its nuclear testing program to the South Pacific. The tests there were also carried out aboveground until 1974. In the course of 46 such overground tests, 675 times the potential of the Hiroshima bomb was ignited in the South Pacific, with the release of radioactive fission products corresponding to that in a chain reaction.

The last atomic explosion, at Mururoa, took place in February 1996, after newly elected President Jacques Chirac, ignoring all the international protests, had ordered a final series of eight nuclear weapons tests in the South Pacific the summer before.

Since that time, functional testing of nuclear warheads and a determination of their precise effects is carried out in the laboratory, like in the USA.

At least 76,000 persons – for the most part French conscripts who were sent to the South Pacific in ignorance of their intended mission – have participated in the atomic weapons tests.

From a test group of over 700 participants examined by the "Association of Veterans of Nuclear Testing" (AVEN), almost one third are suffering from at least one form of cancer – twice as many as in the same cohort in the "normal population."

Some complain of skin or skeletal diseases or report that they have given birth to children with deformities. The medical ramifications have yet to be researched in detail.

The AVEN association and an organization founded by former Polynesian employees at the "Mururoa e Tatou" nuclear test site filed charges against persons unknown in fall 2003 for exposure to radioactive contamination.

In 2004 the two Paris judges Anne Auclaire-Rabinovitch and Anne-Marie Bellot then opened proceedings against persons unknown for negligent homicide. Several individuals who were involved in establishing a similar association in Algeria were denied entry visas to France. Apparently, not all victims count.

Meanwhile, the North Africans would do well to follow the lead of the Pacific inhabitants. In early 2006, the parliament of a French overseas territory, French Polynesia in the Pacific, officially took up the cause of those injured and contaminated by the atomic weapons testing.

A board of inquiry commissioned by representatives in the regional parliament in Papeete (Tahiti) published its final report in February 2006.

The report describes Paris's claim that the atomic test explosions were "clean and harmless" as a "blatant untruth." The board of inquiry recommends that the island region demand compensation from the French government for damage to the environment and to human health. Proceedings are now pending.

Turkey's Nuclear Ambitions
More Nuclear Power at the Black Sea?
As the Turkish government is unveiling its plans to go nuclear, battle lines are being drawn between environmentalists and supporters of nuclear energy. But as Dorian Jones reports, Turkey's quest for nuclear power could have consequences stretching far beyond its borders

Gauging Terror
India, Pakistan, and the Nuclear Bogey
Despite suffering substantial losses from terrorism, India resists initiating military strikes, but there is worry about the limit to India's restraint, writes Michael Krepon in his analysis

END_OF_DOCUMENT_TOKEN_TO_BE_REPLACED
Social media
and networks
Subscribe to our
newsletter