From a few Catholics to a multitude: Pope to visit Bahrain 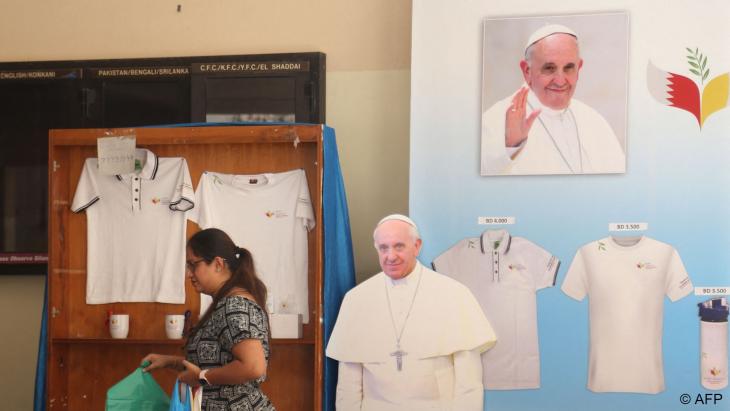 Before Bahrain established the Gulf's first church in the 1930s, priests would visit from Iraq to perform services for a small Catholic community.

Now, its ranks swollen by foreign workers, mostly from India and the Philippines, the community is preparing to welcome the pope, the leader of the world's 1.3 billion Catholics.

Pope Francis's visit this week, his second to the Arabian peninsula, will be especially emotional for Najla Uchi, whose father Salman built the Sacred Heart church that opened on Christmas Eve, 1939.

After lighting candles at her home in Manama, capital of the tiny Gulf nation, Uchi pulls out folders of old photos of her father and a medal he was awarded for building the church.

"My father left his hometown, the Iraqi capital Baghdad, a long time ago," she said. "He came to Bahrain and settled here."

More than 80 years after its consecration, the Sacred Heart is on the pontiff's itinerary in the Muslim-majority monarchy whose Catholics now number about 80,000. Last December, Bahrain also opened the cavernous Cathedral of Our Lady of Arabia, which stands near an oil well and is the peninsula's biggest Catholic church.

Before the Sacred Heart, Uchi said, priests "used to come from Iraq once a month to perform various ceremonies for the Christians in Bahrain".

"When I was growing up in Bahrain, Christian families were few. But today, when we attend Sunday mass, there are thousands of Christians in church."

Bahrain strives to present itself as a model for religious tolerance, with Hindu, Sikh and Buddhist temples as well as Christian churches.

"Life in Bahrain was simple, we grew up among neighbours of different families in Manama," Uchi said. "Religious, ethnic or linguistic differences were not a barrier between us."

Last year, after Bahrain established ties with Israel in 2020, a synagogue that had been closed after disturbances in 1947 reopened in Manama, allowing Jews to worship in public for the first time in decades.

The pontiff first visited the Arabian peninsula to head to the United Arab Emirates in 2019, when he held an open-air mass for about 170,000 people.

"I am so happy to meet him in Bahrain," said Uchi. "I went to meet him when he visited the UAE."

About two million Catholics live in the Arabian peninsula, the cradle of Islam, including one million in the UAE, according to the Apostolic Vicariate of Southern Arabia in Abu Dhabi.

Christians can worship in all the Gulf countries apart from Saudi Arabia, where practicing any religion other than Islam is banned.

After arriving on Thursday and meeting Bahrain's King Hamad, Pope Francis will hold a mass for about 28,000 people at Bahrain National Stadium on Saturday.

A multinational choir of 100 people will sing in English, Tagalog, Arabic, Hindi and Latin at the mass, to be held at Bahrain National Stadium.

The pope will also address the interfaith conference Bahrain Forum for Dialogue and meet the grand imam of Egypt's prestigious Al-Azhar mosque, as well as members of the Muslim Council of Elders.

A government spokesperson declared that "Bahrain, as a multi-cultural society and home to peoples of many faiths, prides itself on its values of tolerance and its long history of peaceful co-existence". The spokesperson added that while the freedoms of religion and worship, and to peacefully express views and opinions, are protected under the constitution, Bahrain has a duty to investigate and, where appropriate, prosecute individuals who "incite, promote or glorify violence or hatred".

Catholic worshipper Mona Koro, a Jordanian living in Bahrain, said: "Our hearts rejoice... For His Holiness to preside over the Divine Liturgy... We feel lucky."    (AFP)

More on this topic
Christians in the Middle East: Rebuilding churches in Iraqews, Christians and Muslims: "We are in dire need of a culture of dialogue"UAE Ambassador Ali Abdulla Al Ahmed on Pope Francis' visit: "Both are religions of God and both are religions of peace"
Home
Print
Newsletter
MoreAll Topics

END_OF_DOCUMENT_TOKEN_TO_BE_REPLACED
Social media
and networks
Subscribe to our
newsletter