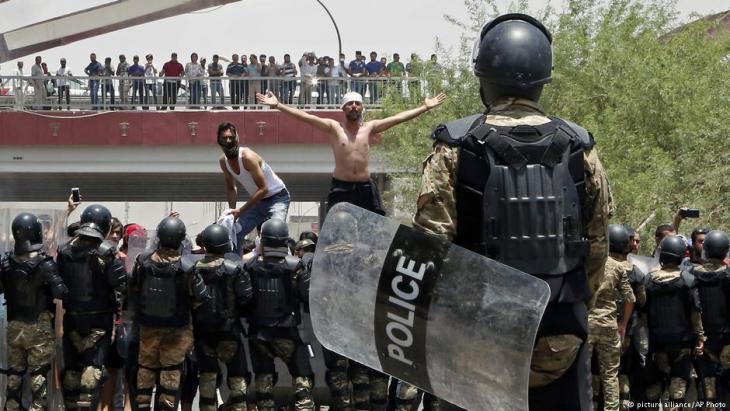 Major rallies against the nation's political elite have been raging in Iraq for months, so far resulting in 15 deaths and 120 injuries. Birgit Svensson reports from Basra, where the protests first flared up and quickly spread through the entire southern half of the country to Baghdad

He was one of the first to take the streets of Basra: Hussam is 23 years old, wears ripped jeans like so many young people in the West, smokes and looks worn out. Since July, he's been out and about pretty much every day to protest. Because here in this southern Iraqi metropolis the mercury is still rising to just shy of 50 degree Celsius, the rallies mostly take place after sundown.

Then, thousands of young people gather at various points across the city and yell their demands: "We want clean water! We want jobs and enough electricity! Down with the corrupt regime! Iran barra, barra (out, out)!"

The protests have now spread across the entire southern half of the country. The wave has also reached Baghdad. But Basra remains at the heart of the movement, because things are especially bad here.

In Iraq, the word Basra is on everyone's lips right now. Partly out of admiration for what's going on here, but also out of horror and fear. It's primarily young men like Hussam and a smaller number of women, estimated to be between 100 and 200, who are taking to the streets and demonstrating against the contaminated water that has already put thousands of people in hospital. Their protests are directed at inadequate power supplies, against corruption and the lack of prospects facing young people in Iraq. After all, the majority of Iraq's population of 33 million is under 25 years old. But they have little future in a nation that has, like no other, been stricken by wars, embargos and terror.

The older generation holds the reins of power and is feeding off the nationʹs honey pots. Brought out of exile by the Americans following the toppling of Saddam Hussein in 2003, they were bestowed with political positions and 15 years later, they're still there. Or they came out of exile in Iran – Shias persecuted by Saddam – and put their roots down in the South, where Shias form the majority population. 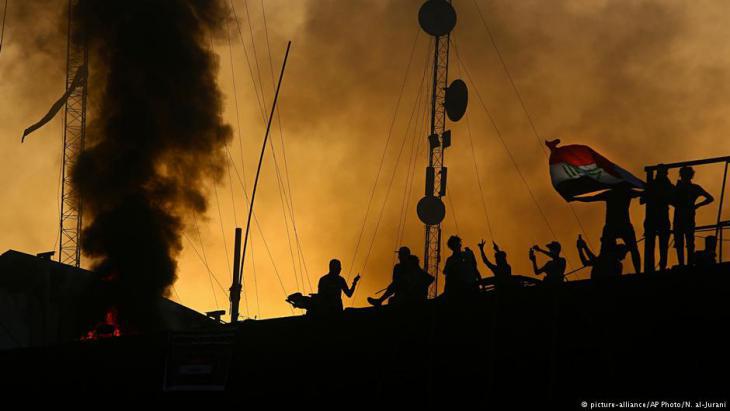 Sunni and Shia, united in their frustration: "the protests appear to be uniting young Sunnis and Shias. While the 2013 rallies drove disaffected Sunnis onto the street against the Shia government in Baghdad to the benefit of IS, today, Shias are demonstrating against their Shia political elite. So, there can no longer be any talk of a religious conflict," writes Svensson

Poor rich Basra. After the IS terror militia's blitzkrieg of 2014, when "Islamic State" (Daesh) captured parts of northern Iraq and Mosul became the capital of the transnational caliphate on the Iraqi side, the population of Basra didn't stop growing. With almost three million residents, Basra is now the second-largest city in Iraq.

Largely spared from terror and violence, the city was regarded as a safe haven for many domestic refugees. Basra's population has grown by almost one million in recent years. But the infrastructure could not keep pace. On the contrary: power supplies couldn't cope with the increase and energy had to be imported from Iran. Tehran eventually cut these supply lines in June, because the bills weren't being paid.

Basra has remained a neglected backwater, just as it was during the Saddam Hussein era, when he took his revenge on rebellious Shias and allowed the city to go to rack and ruin. Only today, it's the Shia rulers in Baghdad and Basra who are themselves doing nothing to help the city.

In the 15 years since the toppling of the dictator, only two bridges have been built over the Shatt al-Arab – the confluence of the Euphrates and the Tigris – and one hospital. Waste water lakes continue to exude a disgusting stench as you enter the city from Baghdad; there are mountains of rubbish in some neighbourhoods and as ever, deep potholes in the roads. 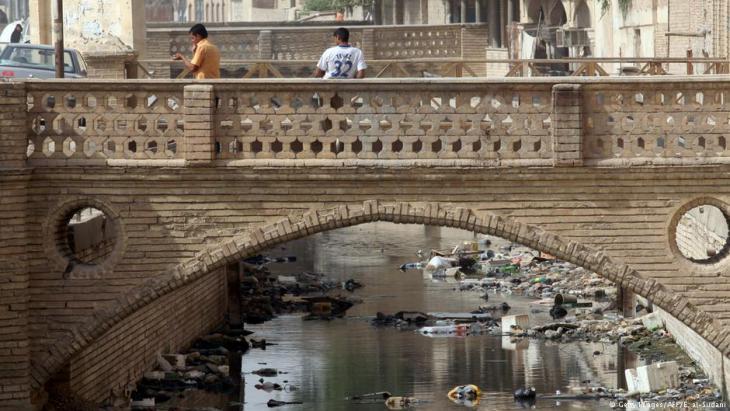 "Venice of the Middle East" a stinking cesspool: in Basra, the appalling stench of numerous sewage lakes competes with noisome fumes from huge piles of rubbish. The cityʹs infrastructure is in a pitiful state. Whether money will actually arrive in Basra soon, as promised by Haidar al-Abadi, is extremely questionable however. After years of fighting "Islamic State" (IS), the whole country needs billions for reconstruction

At the same time, Basra is the wealthiest city in Iraq. More than two million barrels of oil are extracted daily from the oilfields around the city. Basra is feeding the entire nation. More than 90 percent of Iraq's budget is derived from oil sales.

"Elements of the protest movement are made up of disaffected members of the 'Hashd' militias," says Hussam, who works for the human rights organisations Larsa and Amnesty International. He was involved in the protests back in 2015, when people were already demanding more electricity. "They fought against 'Daesh'. Many of them were killed in the process," he continues.

Basra sent the largest number of militia fighters from what's known as the "Hashd al-Shabi", or Popular Mobilisation Front, into the war against IS, after thousands of soldiers deserted from the Iraqi army and "Daesh" captured more and more Iraqi territory. When they returned home following the end of the caliphate in December 2017, they realised that instead of improving living conditions in the city, their politicians had lined their pockets with money that actually belonged to the people and by extension, to them.

Transparency International now lists Iraq as the 169th most-corrupt nation in the world out of a total of 180 countries. Anger and frustration at this is now spilling over onto the streets. It's an uprising of the youth against the old political elite.

In Basra, these young people are destroying the very thing that's destroying them: the provincial council building is going up in flames, just like the palace of the governor and the state TV broadcaster Iraqia, which is barely reporting on the protests thereby abetting the Baghdad government's efforts to play down the situation. But when the Iranian general consulate also catches fire and amid rumoured plans to storm the American diplomatic mission, the unrest can no longer be concealed. Now everyone is talking about the misery in Basra. 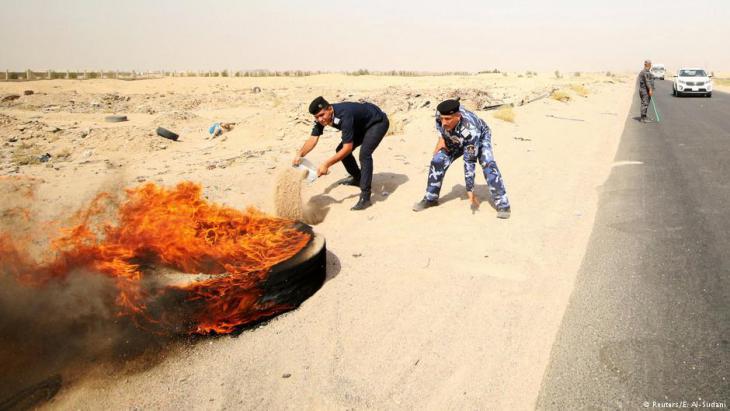 Potential to derail the government in Baghdad: last Sunday unrest also flared near the Zubair oil field owned by Italian company Eni. According to police reports, some 20 people were injured, several by live ammunition. Local authorities confirmed that oil production in Basra, which is central to the Iraqi economy, has not yet been affected. Any disruption to production would not only slow down Iraq's already weak economy, but could also drive up global oil prices

"Now, not only is the Baghdad government against us, but also Iran," says Hussam's friend Ibrahim, who also works for a human rights organisation calling itself Al Firdous. "They'll kill us," he fears. But the demonstrators are not just on the receiving end of criticism and threats. Declarations of solidarity are being issued from all over the nation. "We admire you," is the message appearing regularly on social media airwaves, "keep up the good work!"

Supportive statements are also coming from northern Iraq, a predominantly Sunni region. The protests appear to be uniting young Sunnis and Shias. While the 2013 rallies drove disaffected Sunnis onto the street against the Shia government in Baghdad to the benefit of IS, today, Shias are demonstrating against their Shia political elite. So, there can no longer be any talk of a religious conflict.

In Basra it's not only government buildings that are burning, but also the headquarters of Shia political parties, such as Prime Minister Haidar al-Abadi's "Dawa Party" and the offices of Shia militias such as the "Badr" Organisation, which is supported by Iran. It is noticeable that none of Shia cleric Muqtada al-Sadr's militiamen are visible on the streets of Basra, fighters that otherwise control large areas of the city. Their headquarters then remain the only one spared from arson attacks.

In the meantime, Iran is resupplying electricity and Basra now gets power for about 16 hours a day. Muqtada al-Sadr, whose citizens' alliance "Sairun" won parliamentary elections in May, has now negotiated a compromise with the demonstrators in Basra: they should give the government and those with political responsibility 45 days to meet their demands and present viable concepts to improve the situation in the city.

Al-Sadr is himself exploiting the situation politically and exerting pressure on Iraq's 329 members of parliament to find compromises and swiftly form a government. This has advanced his position to that of absolute kingmaker. Right now, nothing happens in Iraqi politics without Muqtada al-Sadr. His power is being further consolidated by his successful crisis management in Basra.

But his words must be followed up with action. "If nothing happens, we'll carry on," Hussam and Ibrahim are determined and speak for the entire youth protest movement when they say: "We're not going to let up anymore."

According to the latest Reuters tally, more than 2.54 million people are now reported to have been infected by the novel coronavirus globally and 177,004 have died. As Muslims ... END_OF_DOCUMENT_TOKEN_TO_BE_REPLACED

While some are beginning to protest the lockdown, others are unable to bury their loved ones in accordance with Islam. Here’s the latest from across the region END_OF_DOCUMENT_TOKEN_TO_BE_REPLACED

From advisories against travel to calls for a new jihad, Islamic State sees the COVID-19 pandemic as an opportunity to exploit. The militants, however, are no more immune to the ... END_OF_DOCUMENT_TOKEN_TO_BE_REPLACED

Coronavirus is also spreading in Iraq. This didn't stop hundreds of thousands of pilgrims travelling to a Shia shrine, however. The nation's health system has already conceded it ... END_OF_DOCUMENT_TOKEN_TO_BE_REPLACED

Coronavirus continues unabated. Iran remains a hub of infection, war-torn Syria has recorded its first case and Yemen is bracing itself for the worst. Here’s the latest from ... END_OF_DOCUMENT_TOKEN_TO_BE_REPLACED

With borders closing and the opportunities for international travel shrinking by the hour, we take a look at coronavirus developments across the Middle East and the wider Muslim ... END_OF_DOCUMENT_TOKEN_TO_BE_REPLACED
Author:
Birgit Svensson
Date:
Mail:
Send via mail

END_OF_DOCUMENT_TOKEN_TO_BE_REPLACED
Social media
and networks
Subscribe to our
newsletter