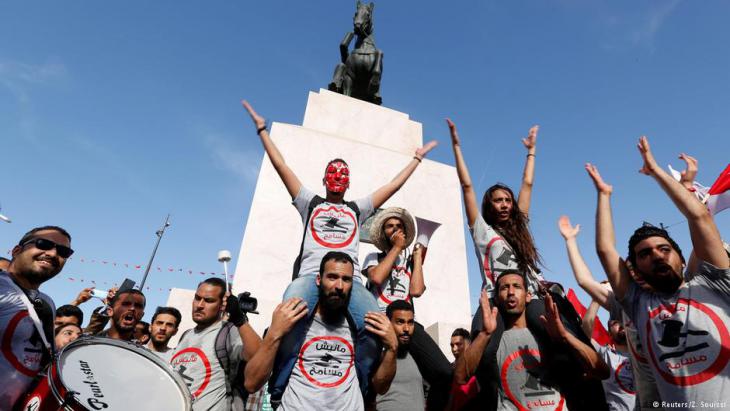 From El Kamour to Carthage: #We will Not Recoil#

Rebels with a cause

Regarded since the Arab Spring as the one country that successfully transitioned from dictatorship to democracy, Tunisia is now feeling the consequences of a failure to invest in its people and its economy. The fact that the system is still riddled with corruption simply adds more grist to the people′s mill. By Houda Mzioudet

It all began on 23 April when 1200 protesters from the southern Tunisian province of Tataouine staged a sit-in in Tunisia′s largest oilfields in the Sahara Desert. The knock-on effect has been a civil disobedience campaign in the city of Tataouine, with men, women and unemployed young people coming out in support of the protesters in the El Kamour region, 120 km to the south. Located in the vicinity of Tunisia′s military zone, the area is home to international oil and gas companies, in particular, the Austrian company OMV and Canadian firm Winstar.

The strategic choice of El Kamour reflects the deep resentment of a generation of marginalised Tunisians in the region. The failure of central government to distribute the wealth derived from Tunisia′s natural resources fairly has been feeding local grievances ever since independence from France in 1956.

In a setting reminiscent of the Dakota access pipeline protests, Tataouine protesters erected tents adorned with Tunisian flags on the sand dunes of the Sahara and set up a sit-in steering committee tasked with monitoring, logistics (including food and water provision) and the smooth running of the movement – for fear of infiltration by ″some extremist elements″.

Social protests as a means of effecting change have been the Tunisian citizens′ lot since 2011. Following the 2014 elections and the mariage de convenance between the Islamist Ennahdha Party and the ″secularist″ Nidaa Tounes, however, authoritarianism at a state level has begun to creep back. It was this coalition that produced the controversial economic reconciliation bill presented to Tunisian parliament in 2015, subsequently ′amended′ to ensure it would pass through. This has triggered widespread anger among the general public, who see it as a move by the political elite to normalise corruption. 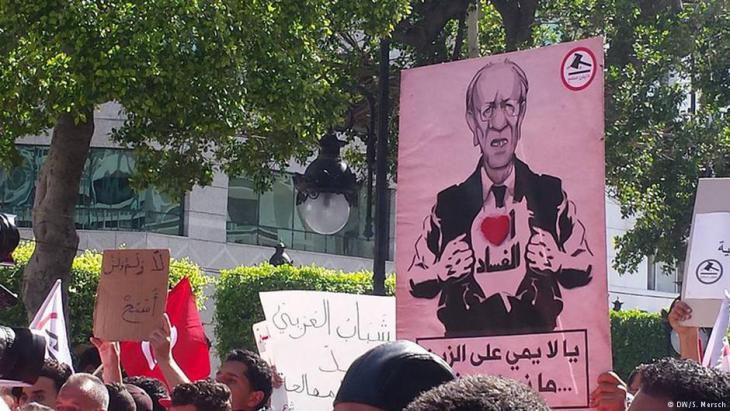 Whitewashing corruption: the economic reconciliation bill proposed by Essebsi would mean an amnesty for businessman accused of corruption under the former president Ben Ali. For many critics, this goes against the spirit of the revolution. Many remain unconvinced by arguments cited in favour of the bill – such as that of encouraging investment in Tunisia′s faltering economy

Impoverished regions in the country′s hinterland have become hotspots for frequent protests – from the closure of the Gafsa mines to the social experiment of Jemna′s collective land struggle. It is no coincidence that El Kamour protesters have followed Jemna′s pioneering example in their attempts to be more organised, less politicised and less likely to be co-opted by political parties. Faced with the government′s refusal to let itself be ″blackmailed by saboteurs who are seeking to disrupt the economy and spread chaos″, however, a shift towards radicalisation was inevitable.

The crisis began on 3 April when 24 employees were laid off by the off-shore Winstar; a general strike of Tataouine oil companies′ employees ensued, when the company refused to re-employ the sacked employees. This led to some 60 unemployed young people staging a sit-in in the city of Tataouine, blocking the road to the oilfields in the process.

With regard to drilling contracts agreed with foreign companies, the protesters criticised the government for a lack of transparency, engaging in a tug-of-war with the authorities. This was a bold move that some politicians and media personalities saw as a dangerous escalation, particularly in view of Tunisia′s faltering economy and the ongoing terrorist threat. 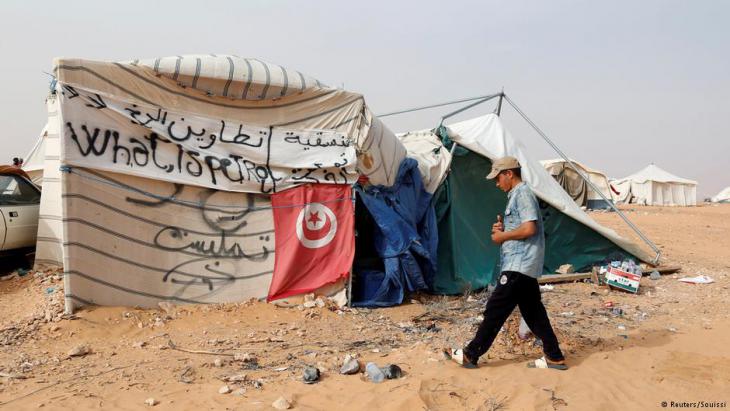 Tunisia′s marginalised fight back: the El Kamour sit-in is now in its fourth week. Set between an oil field and the main road connecting oil wells to the rest of the country, the sit-in, firmly contested by the government and the media, is demanding the creation of 3,000 jobs and a regional development fund

Yet El Kamour protesters were not about to abandon their ″legitimate demands for dignity and equality.″ On 27 April, Prime Minister Yousef Chahed visited Tataouine with the minister of employment and professional training, Imed Hammami, and promised a raft of regional development measures – 64 in all – including 350 job offers in oil companies and the replacement of the governor of Tataouine. These were rejected. Unbowed, President Beji Caid Essebsi delivered a televised speech on 10 May in which he announced the deployment of the Tunisian armed forces to protect the oilfields, while stressing his understanding of the protesters′ constitutional right to protest.

The sudden change of tone in the government from ″placating the protesters″ through meagre and insufficient offers to ″outright escalation″ has sent shockwaves, confounding Tunisians across the country. Where Essebsi stands on the protests is anyone′s guess. Protesters and opposition politicians regard the deployment as a thinly veiled threat to restore law and order. What′s more, the move has only cemented the El Kamour protesters′ mistrust of central government.

Arab women played a leading role in the protest movement of 2011. Since then, ongoing social transformation has had a considerable impact on their lives. What is their assessment ... END_OF_DOCUMENT_TOKEN_TO_BE_REPLACED

Recep Tayyip Erdogan, disappointed by the European Union’s reluctance to integrate Turkey into its ranks, has re-directed his country’s diplomacy toward the Maghreb and Africa to ... END_OF_DOCUMENT_TOKEN_TO_BE_REPLACED

The rollout of coronavirus vaccines in the Middle East and North Africa is already taking place on a massive scale, with the United Arab Emirates leading the way. Nevertheless, ... END_OF_DOCUMENT_TOKEN_TO_BE_REPLACED

Tunisia has launched a successful transition to democracy, but difficult economic and social times lie ahead. According to political scientist Said AlDailami, Europe should focus ... END_OF_DOCUMENT_TOKEN_TO_BE_REPLACED

Mass protests began in Egypt on 25 January 2011. They triggered the overthrow of long-time ruler Mubarak. Ten years later, many human rights activists and journalists are in ... END_OF_DOCUMENT_TOKEN_TO_BE_REPLACED

END_OF_DOCUMENT_TOKEN_TO_BE_REPLACED
Social media
and networks
Subscribe to our
newsletter