From Lemberg to Pakistan
The Yiddish Jokes of Mohammad Asad

Leopold Weiss, the grandson of a rabbi, later also known as Muhammad Asad, became ideologically involved in the founding of the new state of Pakistan. Weiss also translated the Koran into English. A portrait by Joseph Hanimann 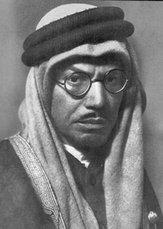 To God belongs the East: Leopold Weiss, grandson of a rabbi from Bukovina, looked for the kingdom of God in the newly-created Islamic state of Pakistan

​​Leopold Weiss was born into a Jewish family in Lemberg (Lviv, Ukraine), Galicia and grew up in Vienna. In Berlin he worked as assistant to the film director Friedrich Wilhelm Murnau, and later travelled through the Orient from Cairo to Teheran as reporter for the German newspaper "Franfurter Zeitung".

As a convert to Islam, he changed his name, language and dress and, along with the likes of Muhammad Iqbal, became ideologically involved in the founding of the new state of Pakistan which he also served in the capacity of permanent representative to the United Nations. The story of Leopold Weiss, alias Muhammad Asad is, in many ways, the story of the 20th century.

The first detailed study of the man, "Leopold Weiss alias Muhammad Asad - Von Galizien bis Arabien 1900-1927", by Günther Windhager, appeared in German (Böhlau Verlag, Vienna) three years ago, however it concentrates only on Weiss's early years up to his conversion to Islam. The later period, up to his death in 1992 is included in a new French study "Un Juif pour l'Islam" by Florence Heymann (Editions Stock), that partially makes use of archive material found in Jerusalem.

The grandson of a rabbi, Benjamin Arje Weiss from Czernowitz (Chernivtsi in the Ukraine) and son of Kiwa Weiss, a lawyer from Lemberg, Weiss could simply have chosen to continue the secularisation process already underway in the family.

Had he chosen this route after his parents' move to Vienna in 1914, it would likely have led, across the ruins of the Austro-Hungarian Empire, and via a few successful inter-war years, to a voluntary emigration to Palestine, a hasty departure for America, or even to death in Hitler's gas chambers, the fate which befell both his father and his sister.

Assistant to one of the great filmmakers of his time

After half-heartedly studying philosophy, the young man discovered that the literary cafés of Vienna, and later, Berlin were more to his liking, while at the same time working as temporary assistant to Murnau.

He found a job as telegram editor at the Rudolf Dammert press agency, a subsidiary of United Press of America and thanks to the scoop of an exclusive interview with the female companion of the writer Maxim Gorki, the door to a career in journalism opened in 1921.

The fixation with technological progress and material comfort that characterised the inter-war period left Weiss with feelings of alienation according to his book of memoirs "The Road to Mecca" published in 1954. What Hermann Broch had referred to as a "value vacuum" was to Weiss a symptom of a society which was not prepared to seek anything beyond its own comfort. He was looking for something more.

The Oriental roots of Jewish culture

Whilst his knowledge of Hebrew had allowed him to read the holy texts in his childhood, the secularity of his parental home meant that religion did not have the prominence in his life that it might have done. It's safe to say though that the young man would not have been entirely unreceptive to the thinking of the philosopher Martin Buber or the writer Eugen Hoeflich both of whom were engaged in tracing the Jewish tradition back to its pre-European, Oriental roots.

The aesthetic Oriental dreams of the Berliner literati à la Else Lasker-Schüler no doubt added a further impetus. The desert as symbol of an alternative cosmopolitan modernism, free from reactionary tendencies had appealed to the European imagination since the days of T.E. Lawrence and Isabelle Eberhardt.

At any rate, the twenty-two-year-old enthusiastically accepted an invitation from his uncle Dorian Feigenbaum to visit him at his home in Jerusalem. He encountered a situation full of tension in the late colonial Middle East, with the British and the French competing over spheres of interest after the fall of the Ottoman Empire and where the arrival of Jewish settlers was already being viewed with suspicion by the Palestinian population.

The Zionist idea was rejected by Leopold Weiss from the start. The idea of the founding of a Jewish state based on the European model seemed to him suspiciously self-serving of the interests of the European powers and hardly acceptable to the Arab population. Moreover the idea of a Jewish state in Palestine was something he saw as an aberration within the Jewish tradition.

Having left modern Europe, alienated by its values, he was now confronted by them once more, transplanted into the Orient by the settlers and their European fixation with materialism. The Arabs, on the other hand, with their Semitic-influenced culture seemed to him, as he would later record in his memoirs, to be the "true" inhabitants of that country.

Leopold Weiss committed his thoughts and observations to paper and sent them to the most important German newspapers. His only acceptance came from the "Frankfurter Zeitung". They offered him a contract as special correspondent for a series of articles and a book, published as "Unromantisches Morgenland - Aus dem Tagebuch einer Reise" (The Unromantic Orient) by the Societäts-Verlag in 1924.

Weiss's journalistic duties took him to Cairo, Amman and, on foot and in secret, to Damascus and Beirut because as an Austrian he was refused a visa by the French authorities. As a reporter he was dedicated, his articles sharply analytical as well as stylistically brilliant. On occasion, however, the critical tone of his articles and the attitude they expressed towards the Zionist movement caused nervousness amongst Weiss's editors in Frankfurt and moved them to disassociate themselves to a degree from their author.

Nevertheless, by the time he returned to Germany in the autumn of 1923, it was clear that these articles were very successful and chief editor Heinrich Simon offered to send him on further travels.

With his wife, the Berlin artist Elsa Schiemann and their son Heinrich, Weiss travelled from Egypt, via Afghanistan and Baghdad to Persia where he remained for one and a half years and was witness to the rise of the authoritarian dynasty of Riza Khan. It was a development he viewed with some scepticism seeing it as the creation of a secular nation state on the Turkish model.

From German journalist to the Saudi King's advisor

Again in Germany and now a successful author he resigned his post with the "Frankfurter Zeitung" and along with his wife and adopted son converted to Islam as Muhammad Asad before setting out on his third journey to the Orient in January of 1927. From now on the convert would wear Arab dress and talk Arabic rather than German.

This time his travels took him to Mecca. After the sudden death of his wife, he concentrated on improving his knowledge of the Koran and soon found himself as an advisor to King Abdel Aziz Ibn Saud. Asad, as a seeker after truth, at first believed that in the rigid doctrine of Wahhabism he had found the hoped for rebirth of Islam from its spiritual origins.

Eventually however disillusionment set in and he left the country together with his new wife, the daughter of a sheikh, and their son Talal – his travels this time taking him via Karachi to the Punjab province.

Weiss's reaction to the 'Anschluss', the annexation of Austria by Germany, shows that his was no fanatical rejection of his past. On hearing of the plight of his family he travelled to Vienna and then on to London in order to obtain an exit visa for his father, mother-in-law and sister. It was all in vain, however. Upon his return he found himself detained and interned by the British as an enemy national, and would remain a prisoner until 1945.

Pakistan – the appeal to the basic values of Islam

His involvement in the formulation of proposals for the new state of Pakistan was one of the most intensely committed periods of his life.

For him, Pakistan provided the ideal concept for a state, remote from nationalist ideologies and based, not upon any ethnic identity nor "natural" state borders, but upon the freely elected appeal to the basic values of Islam – a kind of re-sacrilised republic with appropriate constitutional patriotism.

However, very few of the suggestions of Muhammad Asad, who from now on would be regarded as something of a zealot, found their way into the Pakistani constitution. They were nevertheless preserved in his book, "The Principles of State and Government in Islam".

From 1952 he came to New York as Pakistan's minister plenipotentiary to the United Nations. When the Pakistani authorities refused to allow him to marry his third wife, an American of Polish descent who had converted to Islam, he promptly resigned his duties and decided to dedicate himself again to writing.

Asad's translation of the Koran

His last great project was a new English translation of the Koran, which, although at first it had the support of the Muslim World League, would later be criticised for its overly free interpretation and published only in a censored version in Saudi Arabia in 1974. After some years in Switzerland, Muhammad Asad moved to Tangier, where he continued to write and to comment on world affairs.

The hoped for regeneration of Islam failed to materialise – and the Ayatollah Khomeini's arrival on the scene only elicited a wry comment from Asad to the effect that he was worse than his predecessor the Shah. Harshly critical of the Israeli state he nevertheless had great respect for Jewish culture and religion, though for him it was less universal than Islam.

His private letters to members of his family were often signed with the familiar family nickname of "Poldi", and he regaled his son Talal with Yiddish jokes on the occasions when they met in London.

When Asad died in 1992 he was buried in the Muslim cemetery in Granada. This former western outpost of the Arabian world came closest to his ideal of the Orient, even if its appeal was to things long past rather than to a vision for the future.

This article was previously published in Germany's daily FAZ.

Muhammad Iqbal
"The Reconstruction of Religious Thought in Islam"
Muhammad Iqbal is regarded as one of the great thinkers of the Islamic Awakening. His major philosophical work has now been published in German. The book is a timeless intellectual challenge of the first rank, says Ludwig Amman

Rifa'a Rafi' al-Tahtawi's Account of His Stay in Paris
France as a Role Model
In the 19th century it was not only Europeans who were seized by the wanderlust to see the Orient. The number of people traveling in the opposite direction, from the Orient to Europe, also rose rapidly. Barbara Winckler reports

Max Baron of Oppenheim
An Encyclopedic Travelogue Free from the Arrogance of the Time
As diplomat and explorer, Max Baron of Oppenheim's knowledge of the Orient was exceptional for the time. His interest in the Arab world was unique as well in that it was free from condescension. A portrait by Andreas Pflitsch

Comments for this article: The Yiddish Jokes of Mohammad Asad

He was really a great man.knowledge seeker,determined,motivated,good adviser and whatnot.......well he made his life hereafter.May Allah rest in Peace Ameen

END_OF_DOCUMENT_TOKEN_TO_BE_REPLACED
Social media
and networks
Subscribe to our
newsletter