Frustration boils over in Iran

The mass protests in Iran were initially about economic woes and foreign policy. Now, demonstrators are questioning the country's system of government. Ayatollah Ali Khamenei is blaming the "enemies of Iran" 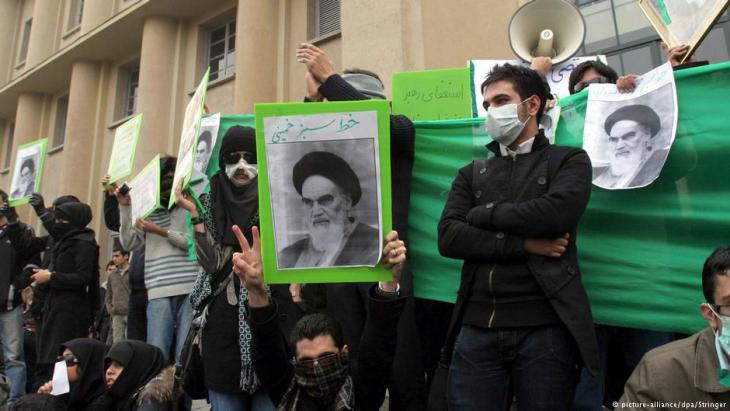 High unemployment, high inflation and a deepening divide between poor and wealthy Iranians: the economic crisis in Iran is a major cause of frustration for many people. The easing of international sanctions following the 2015 nuclear deal has not improved people's living conditions as expected. 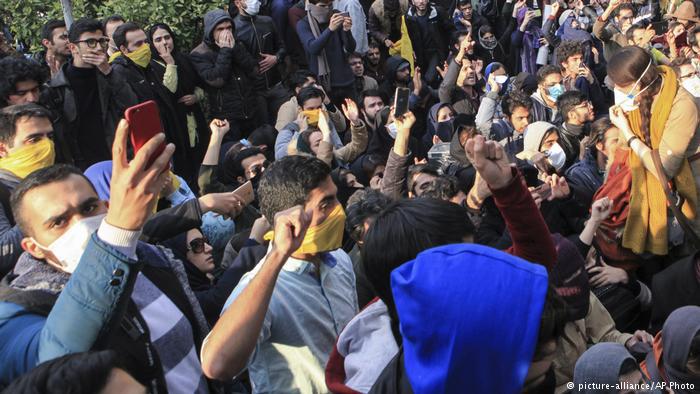 The demonstrations, the largest seen in Iran since its disputed 2009 presidential election, have brought over a week of unrest across the country and resulted in at least 21 deaths. The protests began in Mashhad on 28 December over Iran's weak economy and a hike in food prices. They have since spread to several cities. 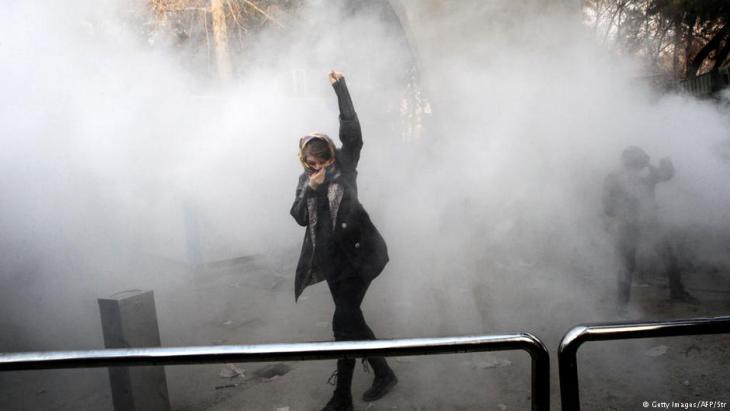 It is not clear who is spearheading the protests, or if anyone is leading them at all. The demands have, however, become more political as time passes. Protesters are now calling on the country's leaders to stop backing the Hezbollah militia in Lebanon and halt its intervention in Syria and Iraq in order to focus on domestic problems. There have also been calls for Ayatollah Khamenei to step down. 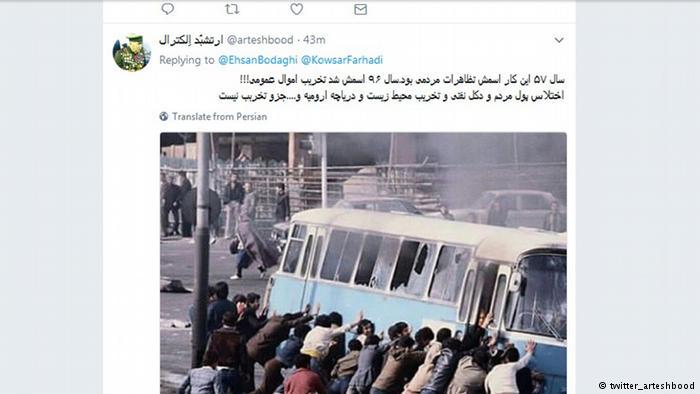 As the year drew to a close, President Hassan Rouhani said that government bodies must provide space for criticism, but also warned protesters that violence was unacceptable. "Criticism is different to violence and destroying public property," he said in a cabinet meeting, according to the state broadcaster. Authorities report that 450 people were arrested in connection with the protests. Twenty-one people are believed to have died in violent clashes, among them 16 demonstrators. 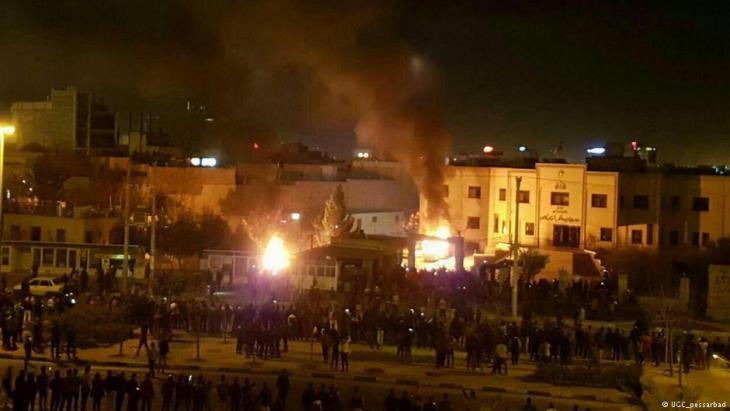 As the new year began, world leaders became increasingly vocal on the subject of the Iranian protests. US president Donald Trump tweeted "Iran is failing at every level despite the terrible deal made with them by the Obama Administration. The great Iranian people have been repressed for many years. They are hungry for food & for freedom. Along with human rights, the wealth of Iran is being looted. TIME FOR CHANGE!" 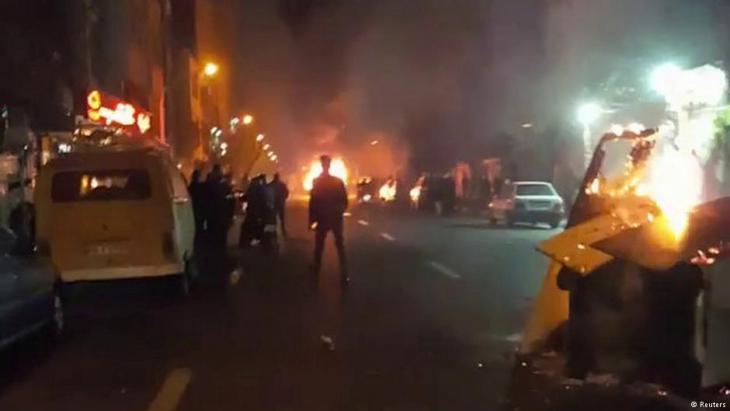 On 1 January, German Foreign Minister Sigmar Gabriel called on authorities and protesters in Iran to exercise restraint. The Foreign Ministry in Berlin, citing Gabriel, posted on Twitter: "We appeal to the Iranian government to respect the demonstrators' rights to freely and peacefully raise their voices. Following the confrontations in recent days, it is increasingly important that all sides refrain from violence." 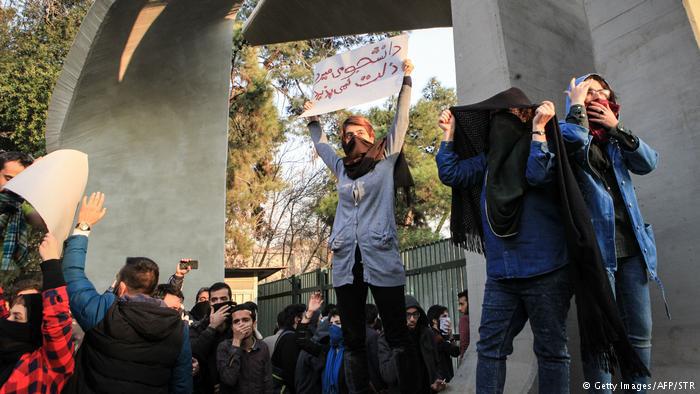 All the Gulf States with the exception of Qatar support the current protests. Geo-strategically, these countries are competing with Iran for power in the region and hope that the protests undermine Iranian influence there, especially in Syria, Yemen and Lebanon. Qatar and Turkey do not support the demonstrations, subscribing instead to the view that they are backed by forces outside the country. Pictured here: young people demonstrating at the University of Tehran 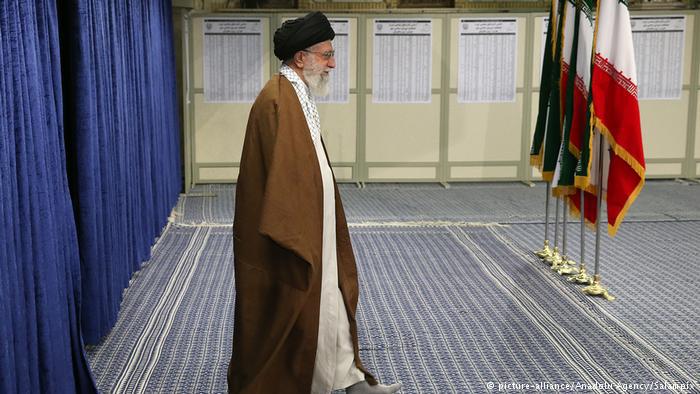 On 3 January, five days after the demonstrators first took to the streets, Iran's supreme leader, Ayatollah Khamenei, reacted to the protesters' demands, accusing "enemies of Iran" of using "different tools including cash, weapons, politics and [the] intelligence apparatus to create troubles for the Islamic Republic." Pictured here: Ayatollah Khamenei 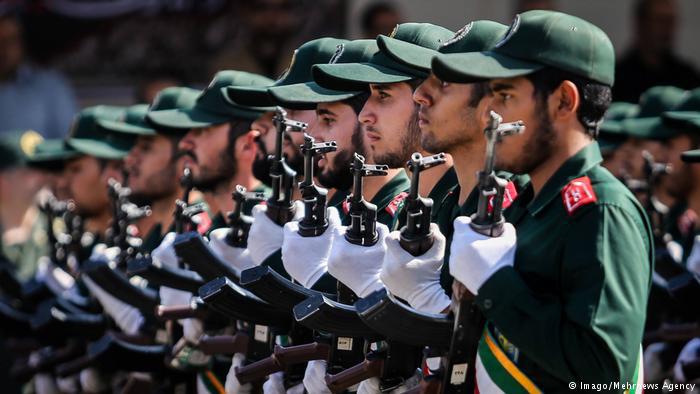 On the same day, Iran's Revolutionary Guard promised "very serious penalties" for protesters and declared the "end of the conspiracy". Revolutionary Guard Commander Mohammed Ali Jafari told state TV that Iran's enemies should know that similar plots would not work in the future, insinuating that he believed last week's protests to be the work of foreign adversaries. Jafari said he had dispatched forces to Hamadan, Isfahan and Lorestan to quell the "new sedition". 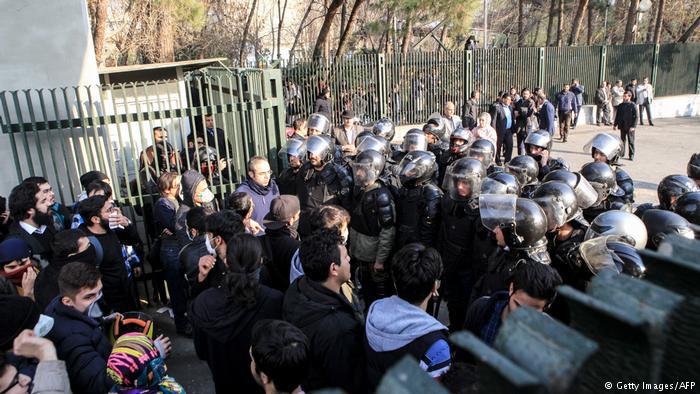 On 4 January, Iranian Nobel Peace Laureate Shirin Ebadi urged her compatriots to take up civil disobedience and continue marching in the streets. In comments carried by the Saudi-owned Asharq Al-Awsat newspaper, she called on Iranians to stop paying water, gas and electricity bills as well as taxes in an attempt to put more pressure on the regime. Pictured here: students face police at Tehran University

END_OF_DOCUMENT_TOKEN_TO_BE_REPLACED
Social media
and networks
Subscribe to our
newsletter