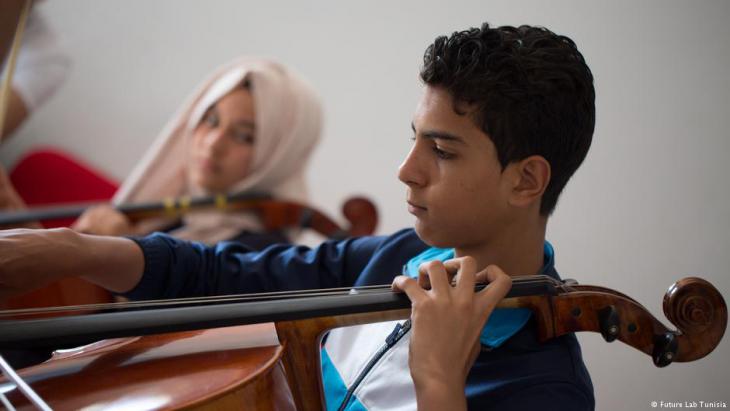 It all comes down to music

The idea of becoming a musician was beyond the wildest dreams of the children at one Tunisian school. Until, that is, "Future Lab Tunisia" arrived – and with it the realisation that dreams might just come true. By Myriel Desgranges

"Music has the power to go straight to the heart. And that is exactly why we do what we do," says freelance conductor and project consultant Barbara Rucha of the Future Lab project in Tunisia, an initiative that aims to foster individual potential through music. Rucha rehearsed with the children of the College et Lycee Ibn Khaldoun for their opening concert, which took place on 9 June in the Tunisian capital.

Future Lab originated, not in Tunisia, however, but in Germany, where it began as a collaborative initiative between the Bremen Chamber Philharmonic and Bremen Ost comprehensive school in 2007. The orchestra's decision to set up a new rehearsal venue at the school laid the foundation for a co-operative venture that, eleven years on, continues to go from strength to strength.

Future Lab's flagship projects in Bremen include one of the city's local opera projects (Stadtteil-Oper Bremen) and a series of concerts under the title "Melody of Life". There are, of course, also many other opportunities for participants to get together as part of the everyday school and orchestra life – in rehearsals, for instance, or involvement with the orchestra's string or brass sections.

Nurturing the magic of music-making

The educational and cultural success in Germany provided the encouragement to try out the concept in Tunisia. Since the start of the year musicians from the Orchestre National Tunisien (ONT) have been working with children from a Tunisian school in various educational workshops. 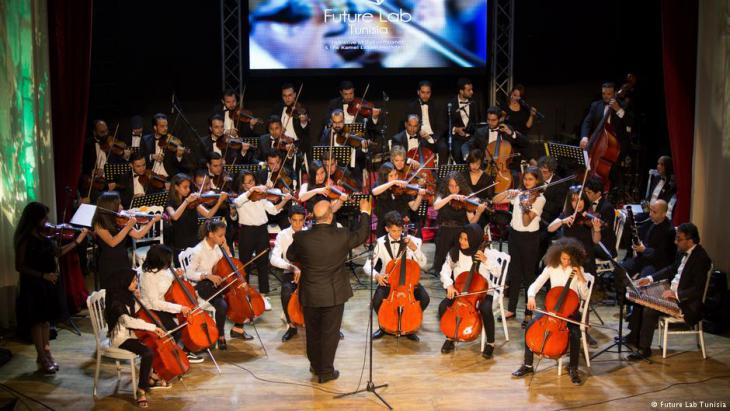 In musical dialogue: the Future Lab project began as a collaborative initiative between the Bremen Chamber Philharmonic and Bremen Ost comprehensive school in 2007. The orchestra's decision to set up a new rehearsal venue at the school laid the foundation for a co-operative venture that, eleven years on, continues to go from strength to strength

The initiative at the school in Tunis has three main objectives: to bring the various social groups together, to create a sheltered and nurturing environment and to encourage and foster the children's personal development by giving them the opportunity to make music together. Financial and organisational backing comes from the German Federal Foreign Office, the Tunisian Ministry of Education and the Kamel Lazaar Foundation, which helps fund artistic projects in the Middle East and North Africa.

Future Lab consists of various workshops, including "Mélodie de la Vie" (Melody of Life) – a counterpart to the German project, which allows the children to present their ideas, hopes and fears in an expressive, artistic way and to work closely and intensively with the musicians and teachers.

Although the initiative is made up of a variety of educational activities, music is its beating heart. The children are given the opportunity, not only of rehearsing with the orchestra, but also of helping put together concerts in which they can also perform with the professional musicians.

Sabri Mili, a pupil from the Ibn Khaldoun school, is one of the many children participating in Future Lab Tunisia. He is particularly happy about the opportunity it has given him to take part in professional music lessons and to learn new things. "The project has taught me many things that will help me in the future," he explains. "It has allowed me to dream of maybe becoming a great musician someday, if I keep practicing."

No pressure is put on the children by the school or the musicians however – it is not part of the Future Lab Tunisia ethos. It's left to the children themselves to decide how much they want to put into the various activities. Future Lab's maxim says it all: "Tu as toujours le choix!" ("The choice is yours!").

Libyan political analyst Faraj Alasha argues that the Berlin conference on the Libyan war did nothing to change the fact that there is no political solution to end the war raging ... END_OF_DOCUMENT_TOKEN_TO_BE_REPLACED

As COVID-19 sweeps across the globe, it is forcing religions to adapt and take action to prevent infection. But experts warn against using the crisis to fuel conspiracy theories. ... END_OF_DOCUMENT_TOKEN_TO_BE_REPLACED

Germany continues to believe in the fiction that palm oil obtained from South East Asia to blend with diesel fuel is ecologically sound and climate-friendly. But that belief is ... END_OF_DOCUMENT_TOKEN_TO_BE_REPLACED

On their fourth CD "Irade" (willpower), Masaa has left its piano sound behind, yet continues with its new guitarist to pursue a path that bridges jazz improvisation and Arabic ... END_OF_DOCUMENT_TOKEN_TO_BE_REPLACED

The parties at the centre of Germany's political landscape have often exhorted citizens to distance themselves from the right-wing AfD party. And yet, Europe's response to what is ... END_OF_DOCUMENT_TOKEN_TO_BE_REPLACED
Author:
Myriel Desgranges
Date:
Mail:
Send via mail

END_OF_DOCUMENT_TOKEN_TO_BE_REPLACED
Social media
and networks
Subscribe to our
newsletter